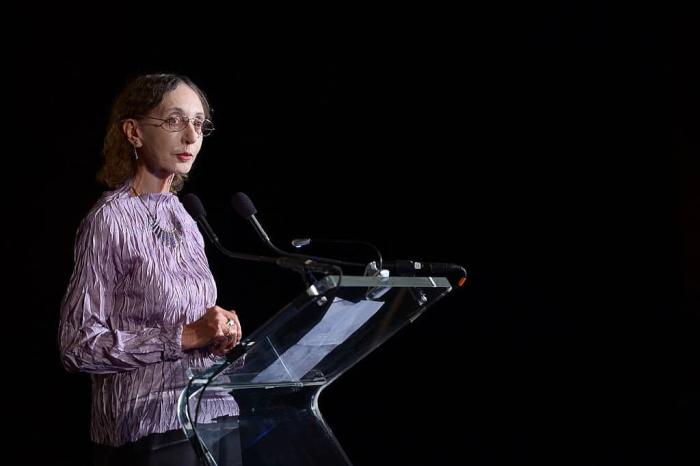 Twitter allows us to talk to our heroes, but it also has a helpfully annoying habit of allowing them to expose all of their arses. Social media has offered many celebrities the opportunity to stick their feet so far into their mouths that they can wiggle their toes from their rectum. We expect certain people to be bad at Twitter, but who could have predicted that multi-prize-winning author Joyce Carol Oates would be a repeat offender?

This moment requires some background. Norman Mailer, the late author and essayist, has been in the public eye a lot this week. Journalist Michael Wolff claimed in an article for newsletter The Ankler that a planned collection of Mailer’s political writings to mark the centennial of his birth next year had been canceled by Random House. Wolff claims this happened because of ‘a junior staffer’s objection to the title of Mailer’s 1957 essay, ‘The White Negro.’ To believe this claim is to buy the fantasy that any junior staffer would have the power to convince executives to do anything. Talk to anyone who works in publishing and they’ll tell you that just doesn’t happen. Said essay collection has already been acquired by Skyhorse, an independent press seemingly dedicated to ‘saving the canceled.’ They’re the ones who picked up Woody Allen’s memoir after it was dropped by Hachette, and Blake Bailey’s biography of Philip Roth after it was dropped by WW Norton. Mailer’s own son told The New York Times that Random House had just not picked up the book, as many publishers often do while a statement from the publishers themselves declared Wolff’s report to be ‘factually incorrect.’

So yeah, much ado about nothing. A hacky ‘journalist’ is drumming up more ‘baw cancel culture’ propaganda by misunderstanding how publishing works, and now we have to put up with the usual bad-faith right-wing losers pretending that they care about Norman Mailer. It’s cancel culture run amok to talk about the misogyny and often deeply messy statements and works of Mailer, something that’s been going on for literally decades. Few writers seemed to relish their own notoriety as much as Mailer.

Also, he stabbed his wife.

Oates, in her defense of Mailer, tried to defend him from claims that he was a sexist and bad husband.

"bad husband" to whom? like many oft-married men Norman Mailer wound up finally with a much younger, adoring, & altogether quite wonderful wife (Norris Church) whom everyone liked. womanizers all eventually wear out, it just takes time & if you're lucky, you are the last wife. https://t.co/uDcDsx9tfs

Did I mention that Mailer once stabbed one of his wives so severely that she almost died? Oates makes it seem as though he just needed to get all of that murderous rage out of his system before settling down with a nice and much younger doormat who knew her place.

In 1960, during a party celebrating his mayoral candidacy in New York, Mailer stabbed his wife Adele Morales with a pen-knife in a drunken altercation. He punctured her cardiac sac, narrowly missing her heart. When one guest at the party went to check on the bleeding Morales, Mailer said, ‘don’t touch her. Let the bitch die.’ Morales survived the attack but initially refused to press charges against Mailer, wishing to protect her children. He was indicted by a grand jury on charges of felony assault, but after pleading guilty to a reduced charge, he received probation and later a suspended sentence. For trying to kill his wife. It took him forty years to admit some degree of remorse for the attack.

Attempted murder did little to hurt Mailer’s career. He won his second Pulitzer Prize in 1979. His friends closed ranks around him and voiced public support frequently. He rallied major feminist support from the likes of Bella Abzug and Gloria Steinem during his second mayoral campaign. James Baldwin (!) explained that, by trying to kill his wife, Mailer was hoping to rescue the writer in himself from the spiritual prison he had created with his fantasies of becoming a politician (!!!) Hell, his biographers still try to whitewash the incident:

Every few months I have to repost the greatest moment in "interviews with literary biographers" history: "Oh, he stabbed his wife, yeah." https://t.co/XAJReRsIu4 pic.twitter.com/mPX48SvDTd

If you want to support Mailer’s work then go for it. I doubt his most famous titles will ever go out of print. I get why he was so beloved as a writer, and why his influence mattered. But dear lord, if you’re that desperate to throw yourself in front of an imaginary bullet for a dead man, maybe try harder than ‘the guy who stabbed his second wife didn’t actively assault the sixth one.’


← Marty and Wendy Byrde Go Toe to Toe with Ruth in the Trailer for Season 4 of 'Ozark' | We Are Actually Rooting For You, United States of America →