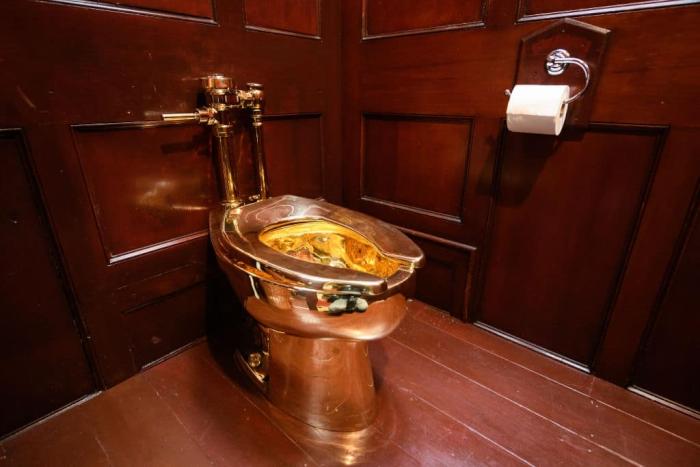 Would You Like to Take a Dump in a Solid Gold Toilet?

Modern art is a fascinating and deeply divisive part of our cultural discourse. Non-traditional approaches to art that value conceptual notions over aesthetic appeal can offer piercing insight into our society, but a lot of the time, it seems like they’re reduced to tabloid fodder for the supposed silent majority to rant about. Yes, sir, I’m sure you could have made Tracey Emin’s unmade bed but you didn’t. Some artists love to screw around with this dynamic and troll audiences to the nines, from Damien Hirst’s diamond skull to basically everything Banksy does. However, Italian artist Maurizio Cattelan may have them all beat.

Cattelan is known for his sculptures that poke fun at historical and cultural figures, from one piece that shows Pope John Paul II struck down by a meteorite to an infamous sculpture showing Adolf Hitler kneeling in childlike awe as if in prayer. In 2016, he made headlines with a radical new sculpture he titled ‘America’. It’s a fully functioning solid gold toilet. Subtle with your title choice there, Maurizio.

Maurizio Cattelan at @BlenheimPalace is now open! Cattelan makes an explosive return to the UK with new and iconic artworks displayed throughout the interiors of the Palace. See it until 27 Oct 2019 https://t.co/bhPLRUxIC7 #CattelanatBlenheim pic.twitter.com/7w0k7oU1qj

Cattelan created the toilet in 2016 for the Solomon R. Guggenheim Museum in New York and visitors were invited to use it for themselves. The museum claims over 100,000 people queued up for the chance to sh*t on pure gold. You may have heard of the sculpture after Donald Trump was offered in when the Guggenheim refused a request from the President to loan him a Van Gogh painting. He never replied to their generous suggestion. Now, the toilet is installed in Blenheim Palace in England, where Cattelan is hosting his first major British exhibition. You can queue up to use it and know you’re not only doing a number two on something valued at a million dollars but that you’re surrounded by the majesty of Winston Churchill’s birthplace. It’s what he would have wanted. Well, assuming you’re not poor. He wasn’t a fan of that type.

As someone who adores weird conceptual modern art that irritates readers of The Sun, I am all in on the subtlety-free brazenness of this ‘sculpture’. I’m mostly surprised Hirst didn’t think of it first. Would you be up for emptying your pipes in a gold toilet, and could you do it in the three-minute time-limit? And, the most pressing question, do you at least get decent toilet paper for this?

At Blenheim Palace, visitors will be able to use Maurizio Cattelan’s artwork, provided they obey a three-minute time limit. https://t.co/sa2inO7IMB pic.twitter.com/5iKAHsrJxD

← Review: 'Riot Girls' Delivers '80s Nostalgia And Post-Apocalypse Adventure With A Proudly Queer Spin | How Many Episodes Are Left of USA Network's 'Suits'? →