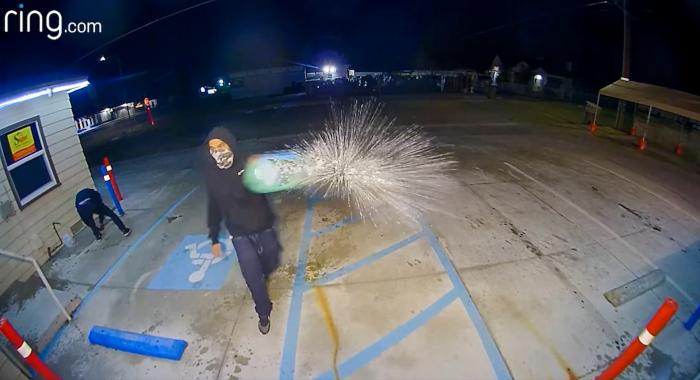 Give Me Fuel, Give Me a Lighter, Give Me 2 Racists on Fire

Fire is dangerous. Intentional or not they can cause millions in damage. Wildfires can destroy thousands of hectares. Fires kill civilians and firefighters every year, and severe burns can cause a lifetime of pain and health issues. People don’t know nearly as much as they think they do about setting and controlling them.

Take gasoline. Gasoline is particularly dangerous because it’s the fumes that burn, not the liquid, and it happens fast. So if — hypothetically — you were a rural teenager who needed to remove a ground hornet nest from the lawn prior to mowing, you might pour a little gas into the nest’s entrance and then a thin trail back what you think is a safe distance. You’re not an idiot, so you do it early in the morning and use a long lighter to start the blaze. Unfortunately, the sun’s come up, the gasoline has started vaporizing, and the next thing you know you’re looking at a small explosion from the inside. This is when “Stop, Drop, & Roll” begins repeating in your head and, if you’re very lucky, the worst consequences you’ll face are singed clothes and awkwardly explaining to your parents what happened to your eyebrows (not based on personal experience).

On the other hand, you might be a racist moron out to burn down an immigration services building only to have things go horribly wrong. That’s what happened in Bakersfield, California on Jan. 2 when a pair of masked men poured an accelerant all over the Servicio de Immigracion before a fire that damaged the garage, did smoke damage to the main building, and caused what I imagine are at least 2nd-degree burns to the dummies who started the blaze. The business’s Ring camera captured the whole event. I recommend watching with audio on; their panicked screams make for an excellent soundtrack.

Obviously, setting fire to an immigration services business is a hate crime and no laughing matter. Had someone been working after hours this could have blossomed into violence or an innocent person killed by flames or smoke inhalation. The business has been closed since the fire, and though a GoFundMe campaign for repairs has reached over $16,000, it doesn’t undo the trauma and lost opportunities for Servicio de Immigracion and its clients. That said, it’s difficult to think of a more positive outcome than this example of instant karma. No major damage occurred and no one who mattered got hurt. The two criminal masterminds left behind their phones, so it shouldn’t be too long before they’re arrested. With any luck, there will be a little permanent scarring. Nothing that requires serious medical care. Just a reminder every time they look in the mirror that racist fools shouldn’t play with matches.