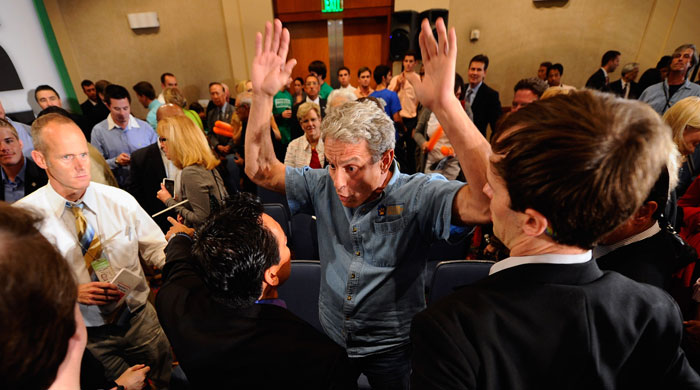 Ed Buck Arrested After A Third Man Overdosed In His Home

In about d*mn time news, Ed Buck has finally been arrested. Following an unidentified 37-year-old man’s meth overdose in Buck’s West Hollywood home, the 65-year-old has been charged with maintaining a drug house, administering methamphetamine, and battery causing serious injury. This is the third man known to have overdosed in Buck’s home in two and a half years, but the first who survived.

These charges from the Los Angeles County district attorney only account for the most recent overdose incident, which occurred on September 11 of this year. Buck, who is chiefly identified as a major Democratic donor and LGBTQ+ activist, could face up to five years and eight months in prison. He will be arraigned today. Prosecutors are recommending $4 million bail.

But what does this mean for the previous two cases, for which Buck is suspected of administering methamphetamine that led to the deaths of 26-year-old Gemmel Moore and 55-year-old Timothy Dean, months apart?

Los Angeles County Sheriff’s Department has not yet pressed charges in either case, claiming a lack of sufficient evidence that Buck could be held responsible. However, Moore’s mother LaTisha Nixon has raised a civil case against Buck for wrongful death. Furthermore, Nixon and her supporters have argued that Buck is a predator who preys on those ignored by the police, specifically Black men, gay men, sex workers, the homeless, and drug users. They further argue that Buck has been able to hide behind his privilege as a wealthy, white man with friends in high places.

Moore’s own journals blamed Buck for his addiction to meth. Ahead of his death in July of 2017, he wrote, “I’ve become addicted to drugs and the worst one at that. Ed Buck is the one to thank. He gave me my first injection of crystal meth it was very painful, but after all the troubles, I became addicted to the pain and fetish/fantasy.”

The LA police force has been criticized for its failure to reach out to the sex worker community who could potentially give testimony about Buck’s alleged pattern of predatory behavior, which is rumored to include making Black men wear long johns and use meth before sex acts. The police refused to offer immunity to could-be witnesses. This could have contributed to the lack of evidence against Buck. But now, there’s a living, known witness.

The 37-year-old victim, whose race has not been released, could speak to Buck’s behavior behind closed doors. Considering the charges laid down, he probably has. In sharing his experience, this victim could expose a pattern that police acknowledged in January, when Dean’s corpse became the second discovered in Buck’s home.

At the time, Lieutenant Derrick Alfred of the Los Angeles County Sheriff’s Department told KTLA-TV, “It is suspicious that this has happened twice now, so we’re going to conduct a thorough investigation to determine if it is criminal in nature.”

There are signs of progress in a news clip from CBS This Morning, where prosecutors are quoted as describing Buck as “a violent, dangerous sexual predator who mainly preys on men made vulnerable by addiction and homelessness.”

A prominent Democratic donor is accused of running a drug den out of his Southern California home. Ed Buck is being held on $4 million bail after his arrest overnight. Two men have died in his West Hollywood home from apparent overdoses since 2017. @NikkiBattiste reports. pic.twitter.com/DTp9lxAv1b

The clip goes on to note the charges against Buck saying he “used the bait of ‘narcotics, money, and shelter’ to lure victims to his home, where ‘in a position of power, Buck manipulates his victims into participating in his sexual fetishes.” Notably, this is what Nixon has been saying since her son’s untimely death.

← 'Silicon Valley's' Thomas Middleditch And His Wife Mollie Gates Are Swingers | A Brief Explainer: What's the Deal with the Israeli Election? →