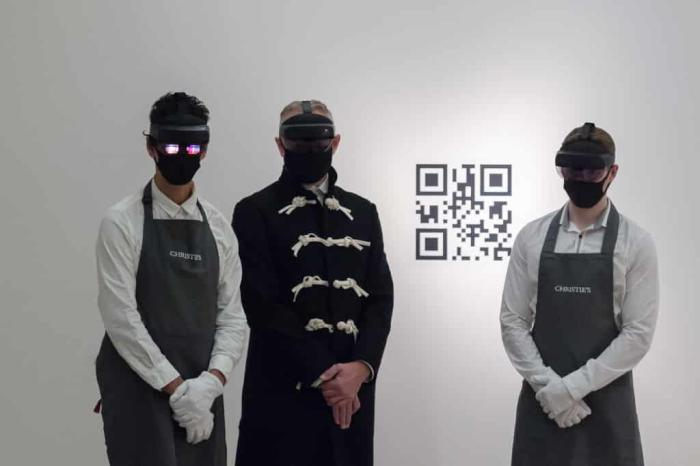 Would You Pay $6.6 Million for a Ten-Second Clip of a Naked Donald Trump Cartoon? Well, Somebody Did.

The #1/1 from beeple's first NG drop has just resold on the secondary market for $6.6 million.

History has just been made.

Congrats to beeple and of course to @pablorfraile for the sale. pic.twitter.com/mTYG4VABSw

This is an artwork by Beeple. It just sold for $6.6 million. It does not exist in the physical world. Rather, this digital piece is part of a new kind of online asset that has very suddenly become the talk of the art world.

Let me explain. Or, let me try to.

The video, titled ‘Crossroads’, is by a guy called Mike Winkelmann. On May 1, 2007, Winklemann, who goes by the pseudonym Beeple, decided to create a new piece of art every day. 5000 days later and his work made its way to the auction block at Christie’s. Beeple’s work is very internet-ish. Imagine lots of hilariously unsubtle political commentary, uncanny valley digital effects, memes, and a lot of lactation. Like, seriously, so many lactating breasts on people, animals, and objects of all genders. Beeple has made work for the likes of Louis Vuitton, Nicki Minaj, and Space X. Because all of his work is digital and he happily shares it all on his social media pages, it’s not exactly easy to own. That piece that sold for $6.6 million, for example? It’s up there in this post. You can watch it right now. Free. I won’t charge you. Last year, however, Beeple made his way into the art market.

Winkelmann started selling non-fungible tokens, digital representations of art whose ownership is verified by a blockchain. An NFT is a cryptographic token that is non-refundable and wholly unique. The basic idea is that these NFTs will allow someone to own exclusively digital artwork. This technology would also allow the owner to authenticate their one-of-a-kind purchase. You can go into an art gallery and take a picture of a Titian piece but you don’t own it, nor does your photograph carry the value or the history of the work itself. That’s the logic.

And it seems to be working out well for Beeple, Everydays: the First 5000 days, a collage of all 5k images from his most recent project, was put up for sale at Christie’s last week. The legendary auction house calls him ‘a visionary digital artist at the forefront of NFTs.’ Art expert Noah Davis celebrates Beeple presenting his online work in this manner ‘as a kind of Duchampian readymade.’ The bidding ends on March 11. The price went from $100 to $1 million in less than ten minutes.

Those pieces have been brought together in one digital collage EVERYDAYS: THE FIRST 5000 DAYS, minted as an NFT and is being auctioned off by Christie's.

The current bid is $3M pic.twitter.com/rwwa64YXNV


Beeple’s not the only one cashing in on this new and obviously bonkers market. The NBA opened its Top Shot market, akin to digital trading cards, and fans are shoving their money into the organization’s hands. A video highlight of LeBron James sold for $200k. Someone paid $600k for a remastered version of the original Nyan Cat. And, of course, Grimes is now involved. She claims to have sold a collection of digital artworks for around $6 million.


It remains to be seen how reliable this digital market is, and whether it has long-term possibilities. The entire art market is built on smoke and mirrors of this kind so it’s only natural that we’re now at a place where people are willing to pay literally millions of dollars for a meme. Still, this is also a reflection of art in 2021. Why can’t memes be art? Given the enormous influence and sheer omnipresence of digital art in our lives, why not inject it with some sort of tangible monetary value? Is it kind of bullsh*t? Sure, but so is paying over $450 million for a Da Vinci painting that might not even be a real Da Vinci painting. I can’t say that I’m a fan of Beeple’s work — seriously, why all the lactation? — but I am a fan of weird conceptual art that annoys people, and this auction reminds me so much of the big auction that Damien Hirst did of work made specifically for sale that made him millions as the economic bubble burst worldwide. It’s a performance unto itself.

← Stephen Colbert Just Made It Difficult To Sing The TMNT Theme Without Getting Depressed | Review: 'Moxie' Is A Feminist Punk Album For Generation Z →