Cola Out Of Space: The Coca-Cola Starlight Taste Test

My 11-year-old son put his hand on my arm as I was about to twist the top off of the bottle of Coca-Cola Starlight and said, “Wouldn’t it be funny if you were sucked into a vortex when you took the top off because space is a vacuum?”
That is not a thought that had occurred to me, but I won’t lie; it did make me hesitate. It’s one of those weird things you don’t expect a kid to say, so it sounds plausible when they do. Luckily, The Coca-Cola Company didn’t set out to kill us all like Quaid on Mars … this time.
Starlight is a limited edition cola flavor that the soda behemoth released last month with minimum fanfare. Unless you’ve been to the Coca-Cola website, you probably haven’t seen much marketing for it.

My first thought was “My God, it is very red.” Apparently, this is to remind you of the infrared wavelengths that travel through space. It’s definitely going above and beyond to capture the market of people who monitor giant space telescopes and satellite arrays. The color is startling but pretty. It looks like it should taste like cherries, but it doesn’t. Not really. 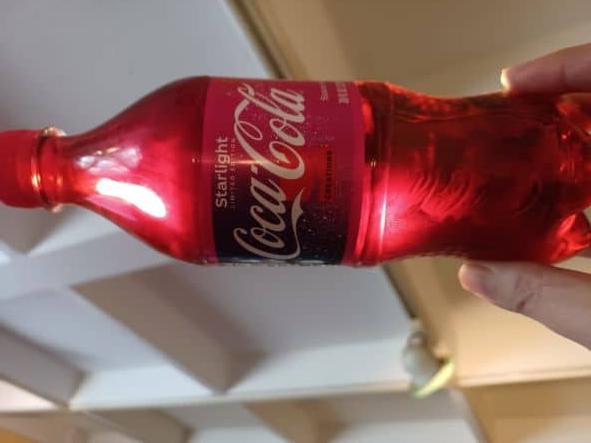 Once I poured it over ice, it took me a minute to place the aroma. It definitely gives off a cotton candy scent. I was afraid it was going to be syrupy sweet; instead, it was kind of “refreshing.” What does that mean? There was no aftertaste that made me want to scrape off my tongue the way I do after drinking most other sodas. How’s that? It didn’t taste like Coke, or Coke + some flavor. It is wholly its own thing. I had my husband bring home some classic Coke so I could do a real comparison because it’s been a minute since I’ve had an ice-cold Coca-Cola. I wanted to make sure I wasn’t forgetting what Coke tasted like. 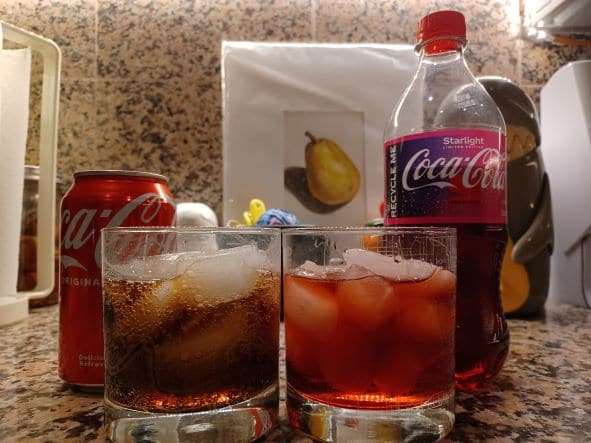 It looks like cherry cordial, right? It should taste like cherries! I thought it had a fruity kind of flavor to it. My husband said it tastes like Big Shot Red Creme Soda, which you can get if you’re in Louisiana (Someone go do that taste test and get back to me).

It’s not overly sweet, and it isn’t overly bubbly. By itself, it’s a pleasant soft drink. But we here at Pajiba are adults, and we do adult things. So, I mixed in a little white rum we had in the cabinet. You know, for science. Folks, I am here to tell you that Coca-Cola Starlight makes an A+ dangerously drinkable cocktail. The rum brings forward all of the cherry flavors that are hinted at when you drink it straight. That masks the flavor of the alcohol, so it’s like you’re sipping a sweet, complex, fizzy water. I could have had a few. And with a twist of lime? Perfection! 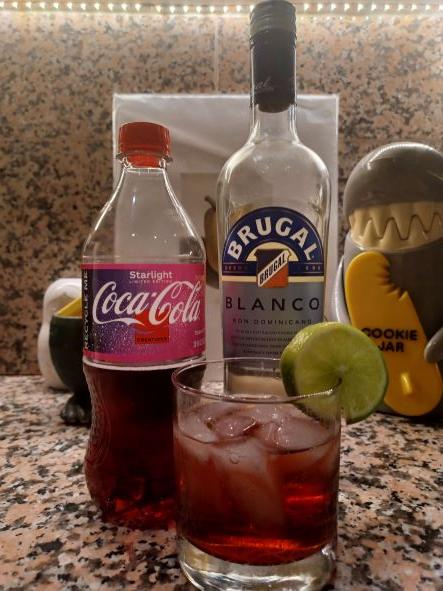 I don’t know how long Starlight will be available on shelves before it heads back to whatever planet it’s from. If this sounds like your jam, get out there and find it before it blasts on out of here. I’m good for now, though. I don’t think I need any more at the moment. It turns out doing a Coca-Cola taste test at five in the evening is a bad idea if you want to get any sort of decent sleep at night when you’re my age.