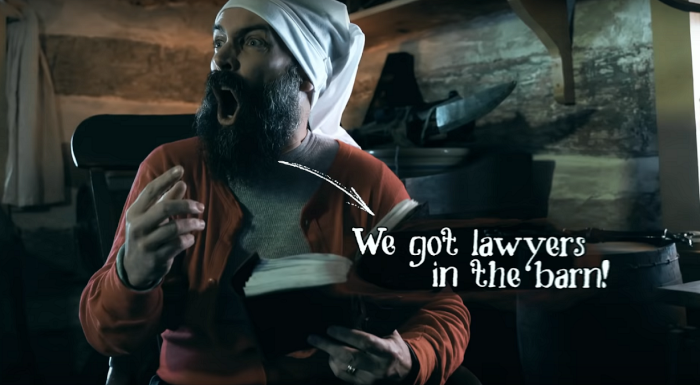 There’s a lot to be said for maximalism in rock ‘n’ roll. God knows I’m a proponent of it, rabid Iron Maiden fan that I am and all. Massive sets full of flames, fireworks, and snarling beasts—that’s the good stuff, hook it straight to my veins. It’s not just Maiden, of course. Metal as a whole is an inherently big genre. From the ear-busting noise of the guitars down to the oft-fantastical artwork, we like our sh*t extreme and ridiculous. As a form of escapism, the substance of the music combined with the spectacle of the stage show is un-matched.

That being said, there’s a lot of variety there too (metal, after all being so ripe for parody for the cartoonish amount of sub-genres it constantly births). Especially when it comes to stage shows. During lockdown, when live music ceased to exist, I realised just how much I needed it—how much I lived off the energy and the vitality of seeing musicians on stage, communing with the masses of strangers coming together over a shared passion for that most ineffably magical of things. Whether it’s shows that tend towards the maximalist, or the minimalist, it’s been the most incredible, life-affirming thing to be able to do that again over the past year or so.

I’m going to a gig this Saturday that I’m particularly excited about, and it’s one that prompted me to write this little piece. It’s a band that tends towards the minimalist side of things—in terms of stage production, image, and that slightly more intangible rock ‘n’ roll quality, ‘amount of fuss’ (which is sometimes sat right next to ‘ego’ in the classroom). They are a band that just keep their head down, working constantly and putting out high quality records of remarkable consistency. Unpretentious, ferocious, and deserving of every success, their name is Clutch, and I’ve written about them before. In some ways rock and metal’s best little secret, Clutch are an American rock band from Maryland who formed in 1991, and who have had a fair few phases, musically speaking, since then. Two things have remained constant throughout all that time: 1) They rock, and 2) Their lyrics are some of the best around.

Clutch’s frontman and lyricist, the incomparable Neil Fallon, happens to possess one of the greatest, most distinctive vocals (and beards, to be fair) in modern rock and metal—but he also writes song lyrics that somehow manage to be badass, inventive, and absolutely hilarious all at once (which, considering Fallon’s English lit degree, I guess makes a lot of sense). Fallon weds those words to an impassioned delivery chock full of conviction and perfectly placed percussive barks. What I’m really happy about, as a huge Clutch fan, is the fact that in recent years the band have turned their focus to music videos more, and they have done so perfectly in keeping with their essence. To me, these are some of the best, downright funniest and most amusing music videos around today. Forget yer Taylor Swift and her ‘best short film’ boll**ks! Stick some Clutch up your pipe and smoke it! Here are some of their best recent works:

‘Ghoul Wrangler’, in which Neil deals with a particularly nasty case of ‘legalese’—an infestation of rabid, zombified/possessed lawyer-demons, naturally (‘Thirteen bloody litigators feasting on the hog, my god, Mabel, we got lawyers in the barn’), that can only be dealt with one way—‘Folk magic, hot off the grill!’:

‘Hot Bottom Feeder’, which is, incredibly, beautifully, literally just a recipe for Maryland crab cakes in song form (‘Grab a biscuit cutter and pack it till it’s filled, stick it in the reefer for a little time to chill’), which also takes time to call out the awesome nature of the beast at its centre in its chorus (‘100 million years old, transcendent creature’):


As if that couldn’t get any better, Neil’s mum maybe shows up in the comments section to praise his culinary skills?

‘X-Ray Visions’, in which the boys get trapped in a Wes Andersonian black ops/CIA/deep state nightmare featuring ‘the angry spirits of Ronald and Nancy Reagan’:

‘How To Shake Hands’, in which the boys satirise the American political/mass media machine, but in the process give us some great policy proposals from President Neil (‘First thing that I’m gonna do is disclose all those UFOS, put Jimi Hendrix on the twenty dollar bill, and Bill Hicks on a five note’):

‘Red Alert (Boss Metal Zone)’, which is literally named after a famous electric guitar effects pedal, the video for which is heavily steeped in Blade Runner and Alien references, and which has what must be one of the funniest video descriptions on YouTube

‘Early in 2021, I learned the Boss Metal Zone pedal schematic was being presented as “proof” that the Covid-19 vaccine had an electronic component to communicate with 5G cellular networks. It was, of course, nonsense. It sounded like a Philip K. Dick premise. I didn’t want to write a song specific to Covid-19 vaccines, so I went with the Philip K. Dick angle (again). “Do Androids Dream of Electric Sheep?” came to mind (replicants, in particular, representing what is real and not real, or is there a difference at all?). The video makes no secret that this is an homage to Philip K. Dick and a future where we have distortion coursing through our veins.’ - Neil Fallon

‘Slaughter Beach’, in which the band welds together some sort of crab-based alien species (?) with lyrics about ‘economic casualties’ and ‘blue-blooded creeps’ which somehow ends up making perfect sense and enough to make you want to follow them into battle:

‘In Walks Barbarella’, which features quite simply one of my favourite of all of Neil’s trademark evocative proclamations: a repeated chorus refrain of ‘Weaponised funk!’:

‘A Quick Death in Texas’, in which Neil falls afoul of Southern mores (‘My nasty Yankee mannerisms, didn’t jive with the local traditions’):

And though the boys have really hit their stride with the videos in recent years, it’s not something that they’re new to by any means. One of my slightly older favourites is the video for the song, ‘Burning Beard’, from their 2005 record, ‘Robot Hive/Exodus’, in which Neil plays a fiery (quite literally in this case) preacher amidst some apocalyptic shenanigans:

A year or so ago, Neil Fallon featured in a video by a then-nine-year-old kid guitarist (YouTube handle ‘Delco Detention’), who alongside his dad plays Clutch cover songs on YouTube. This video, however, was a response by Neil finding out that the kid had also written an original, Clutch-style composition. That response was Neil deciding to lay down some original vocals for that composition, and it’s as awesome, hilarious, and wholesome as it sounds:

Bonus bonus! Some of the best lines from other Clutch songs:

From ‘The Mob Goes Wild’:


Firebirds, energy weapons
Both of these things are interesting to me
I don’t care how you get them
I need them both and I need them urgently


For Thanksgiving we had ‘tatas,
Succotash and rutabagas
Then came turkey from the oven
Broke the wishbone
Covenants were sealed and set

From ‘We Strive For Excellence’:


I have a hammer, a box of nails
Two M80s’ and punk sticks
My uncle’s favorite Farrah Fawcett lighter
A Schwinn hurricane with BMX grips
We deliver where Knievel failed
What’s a little bit of tetanus?
Pledge allegiance to the denim flag
And strive for excellence


Ribonucleic acid freak out
The power of prayer
Long halls of science and all the lunatics committed there
Robot Lords of Tokyo
Smile, taste kittens
Did you not know that the royal hunting grounds are always forbidden?

From ‘Escape From the Prison Planet’:


And to the tune of a billion dollars I supplied to the D.O.E.
Some tasty little nuggets of alien technology
And as one might expect, I’ve been harassed for years
The Men In Black have been bending my ear