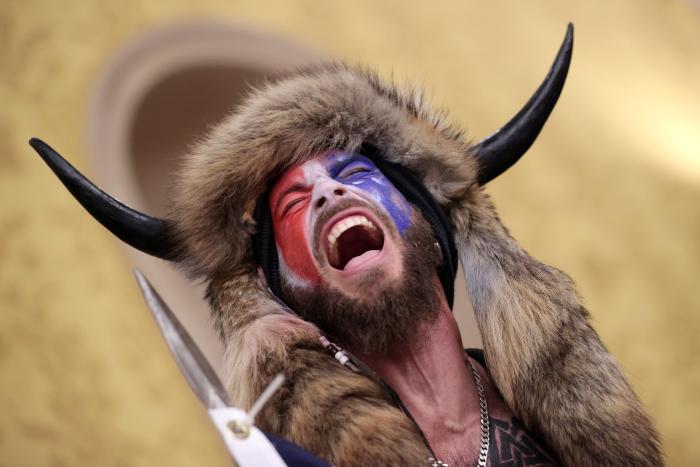 We can no longer afford to ignore the stranglehold American exceptionalism has on our past, present and future.
It’s staring us all in the face, mocking boots lazily propped up on the desk of the Speaker of the House. It’s jeering and screaming as it tears through the halls of Washington, D.C., in an explosion of hate and desecration. It’s causing death, destruction, pain, and chaos at the very heart of our nation.

After Wednesday, there is no longer any question that our national cult of American exceptionalism is now intrinsically linked to the cult of Trump, but American exceptionalism is also a cult that virtually our entire country belongs to. That’s not something easy to accept, even now. As the media coverage started to pour in, one common refrain emerged over and over again. A half-dazed protest that “this type of thing only happens in banana republics.” To other countries and far-away places. But never to us. Never the United States. The attitude is wrong. It’s false, egotistical, and untrue. And it is a lie that can do damage when left unchecked.

We are no better than any other people or any other country on this earth. No matter what our trappings or privileges, underneath it all we’re the same.

I understand the temptation to view the United States as an untouchable elite force, a guardian and beacon for the world, shining in the dark like the Statue of Liberty. I was raised with the exact same schooling as you, the one that pretends nobody was here before white settlers arrived and that Christopher Columbus was an all-around great guy. The one that thoroughly whitewashed our history, erased non-white races, and embraced the idea that we’re the world’s only superpower.

Growing up, our society, our education, and our pop culture all enshrined this concept of exceptionalism. Then they watered it, spoon-feeding us one single, implicitly explicit concept: That American superiority is dependent on white society occupying the top spot on the food chain and holding that spot at all costs. Even if it means enslaving, diminishing, or oppressing everyone else. It’s the same delusional, racist, xenophobic crap at the core of the modern GOP party, the MAGA movement, and Trumpism. It’s the same disgusting rhetoric driving the pro-Trump insurgents who stormed D.C. on Wednesday with the intent of overturning our democratically-elected government.

Let’s take a look at another example of American exceptionalism, and turn our gaze to Twitter’s favorite punching bag over the past few weeks, a true tonta who continues to release tone-deaf statement after tone-deaf statement, because she’s a glutton for punishment (but never for carbs): Hilaria Baldwin. Mommy influencer, wife-of-Alec, and professionally unwhite white woman. A not-even-remotely-foreign woman with a selectively “Spanish” identity that she has Dolezaled into being.

I understand the urge to dismiss this clown in light of recent events. It would be simple to look at Hilaria Baldwin’s track record of ineptly faking her Spanish heritage or pretending to forget the word for cucumber and laugh at the absurdity of it all. Once you’ve stopped cackling, all I ask is that you take a moment to think about the far-reaching implications of this type of behavior, and know that if you continue to laugh or dismiss this, then you’re buying into the same cultural erasure and weaponized entitlement reverberating through our battered, shaken country today.

Because what is the message that Hilaria’s choices send? By her actions, she’s proclaiming that she has the right to appropriate other cultures. Whenever and however it benefits her, without facing any real consequences (that is, until a single tweet finally tears down her wizard curtain). Like many white colonialists before her, not only does she get away with this type of behavior but she also openly profits from it as a recognized public figure.

Trump and the GOP have long embraced this type of entitled whitewashing. A perfectly gentrified American Dream where white people reign supreme just as they always have. Anything foreign or other is viewed with suspicion or outright hostility, unless there’s something shiny, sexy, glamourous, or appealing about it. Then, all of a sudden, it becomes desirable — once it’s been washed, sanitized, and re-packaged.

According to this warped Dream, we immigrants need to assimilate into the country and subsume our heritage into this newly blanket identity. We have to do so because we’re all con artists and criminals and how dare we not be able to speak English fluently. Once they’re done othering us, the very same voices rejecting and demeaning our culture go out and celebrate with family night at Taco Bell (or Olive Garden, apparently).

Did Hilaria Baldwin ever break out into a cold sweat while watching white supremacists marching with tiki torches in Charlottesville? Did she look at what happened on Wednesday and start drawing the inevitable comparisons to Hitler’s Beer Hall Putsch? Did she grow terrified at the thought of all this happening on her home soil, to the point where she started to wonder what side of the detention camp fence she’d be on?

I have. And when I trace the patterns of my skin, I know what the spine-chilling answer is for me. I think we all know what the answer is for her too. I think that if she had been anywhere near the insurrection rampaging through our capital on Wednesday, we’d all get secondhand whiplash from the speed in which she suddenly became just a white woman from Boston again. A woman without any trace of a foreign accent, sleeves draped just so to cover her carefully bronzed skin.

Hilaria Baldwin thinks she has the right to steal other people’s cultures, the exact same way that pro-Trump insurgents thought they had the right to overturn an election and didn’t feel the need to hide their faces when doing so. They grinned and howled and whooped straight into the camera, without any fear of recrimination from the society that is so clearly theirs. A society where they can parade their disgusting Dream through the halls of our democracy. A society where they’re encouraged to riot by the sitting President of the United States.

Somehow these people, just like the Hilaria Baldwins and Rachel Dolezals and Karens of the world, feel empowered to act with impunity. They know they’ll be allowed to leave the scene of their crime without arrest, that they’ll never be hunted down in the streets while out for a jog like Ahmaud Arbery. Or gunned down in their own homes like Breonna Tayler. Or choked to death while gasping for their mothers like George Floyd.

They will never have to “Americanize” their names to get a decent job. They will never know the subtle racism, overt discrimination, post-9/11 mistrust, Fox News demonization that comes with being an immigrant or a person of color in this country. They, the predominantly white insurgents who took selfies with the police, will never know what it’s like to be afraid for their lives while facing military-grade police presence at a peaceful BLM protest.

Many of the culprits behind the treasonous acts on Wednesday are obvious — Trump, Cruz, Hawley, McConnell. But so are many others who ascribe to the same tainted American exceptionalism still out there, hiding in plain sight. I think that’s what makes this all so furiously heartbreaking, as Roxana so perfectly illustrated in her piece about food influencer Alison Roman.

Until we finally accept the idea that all cultures are equally beautiful and valued, that no race is inherently more worthy than any other, we are doomed to watch history repeat itself. To continue tearing ourselves apart until we finally, openly acknowledge how much of our country’s soul is rooted in outdated, corrosive, racist ideals. How much longer until we are finally ready to face all of our reflection and stop enabling a system designed to elevate one race above all? If we don’t find a way, then Wednesday will be the first horrific violation of American democracy in the modern era, but it won’t be the last.

← It's Been a Stressful Week, So Here: Have a Damn Fine Duck | Review: 'Herself' Is A Balm For Your Ragged, Aching Soul →