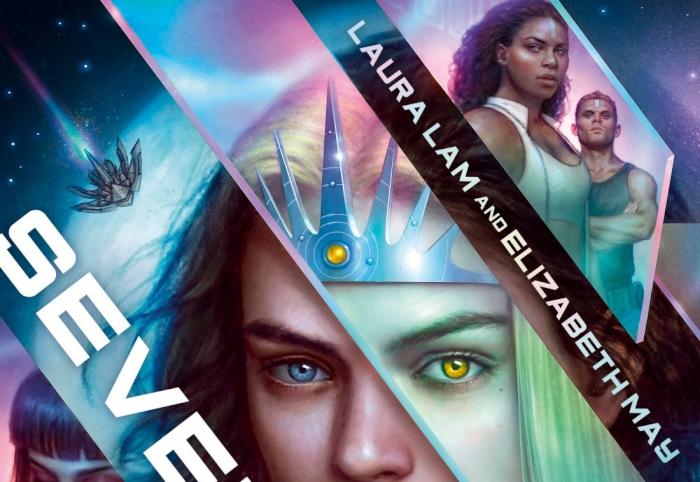 It is a truth universally acknowledged that everything is better when it’s set in space. Is your story good? I’m sure it is, but have you considered setting it in space? Is it a romance? A Western? An action-adventure? Whatever it is, launch it into the stars. For authors Laura Lam and Elizabeth May, two Scotland-based Americans who write YA, sci-fi, and romance novels among them, that was part of the hook for their first-time collaboration, Seven Devils: What if you took Mad Max: Fury Road, one of the best movies of the century so far, and made it a space opera? Admit it, you’re interested already.

SEVEN DEVILS info! Pitched as Mad Max: Fury Road in space, this scifi is about 7 resistance fighters in a world where loyalty to an empire is programmed from birth. Out Aug 4(US)/6(UK)

Eris is a rebel, one of a handful of resistance fighters who have dedicated their lives to taking on the imperialist wrath of the Tholosian Empire. It’s a sharp turn of events for her, given that she was supposed to inherit the Tholosian crown alongside her much more ruthless brother. Now, she has to gather intelligence on his secret plans that could wipe out billions of lives, Begrudgingly fighting alongside her is Cloelia, a gruff but troubled pilot who refuses to trust Eris after a messy mission ended badly for her. Plans to infiltrate a shape-ship carrying a mysterious cargo go awry and the pair find themselves aligned with three empire runaways: A deprogrammed soldier, a former concubine, and a child genius programmer. Between them, they may have what it takes to destroy the colonialist danger before it destroys more.

The set-up of Seven Devils is a familiar one: A lot of Fury Road, a sprinkling of Rogue One, and a side-order of Guardians of the Galaxy (but WAY more queer-friendly.) There’s something about a good old-fashioned ragtag adventure story that really gets the blood pumping. For May and Lam, the heart of Seven Devils is clearly with this core group of troubled, tenacious, and often desperate women, all of whom are scarred by trauma, both personal and societal, the inevitable effects of growing up during wartime.

The women of the story are distinctive figures whose own backstories could probably fill out a multi-novel saga with room to spare (this series will be a duology.) They represent a rich spectrum of identities and experiences within a brutal context, and the book wholly earns its cred as a fierce tale of womanhood in all its forms. I must admit that I inwardly cringe when I see any piece of pop-culture touted as ‘a feminist tale’, mostly because we’ve seen how corporate oversight and pink-washed marketing plays its part in diluting such identities into something more palatable for the masses (read: men.) Seven Devils, thankfully, works hard for its tagline, not just in terms of representation but in depicting how the stranglehold of patriarchy remains so potent even among the stars. Humanity may advance but the smothering confines of the empire are rooted in upholding ‘the good old days’ in all its forms.

Seven Devils is keenly aware that rebellions are fought by the nameless, by the foot-soldiers and workers who do all the thankless drudgery, often at the risk of their own lives, which will go largely unnoticed in the grand scheme of war. In the case of this story, many of these people who have been saddled with the weight of this oft-futile cause were not born into it: they were created specifically for this purpose. Eris was one of hundreds of ‘children’ of the current ruler, brought into the world entirely to kill her brothers and sisters until she was the last one standing and therefore deemed worthy of being the heir. The countess soldiers of the empire are drones with multi-layered brainwashing tactics ingrained into their minds. They literally cannot disobey. How do you process issues of trauma and culpability when you have been stripped of your ability to consent or even understand the mere concept?

The novel switches points-of-view and jumps around its timeline frequently, and while each narrative strains remains unique and dynamic, nobody would blame you as the reader got getting a little lost amid the tangle. It changes every chapter, a mightily ambitious endeavor for any author(s). it certainly doesn’t hold your hand between this and the gung-ho pace with which everything unfolds. While it’s not hard sci-fi — all in all, it’s still very accessible to the casual genre reader — it wears its influences proudly on its sleeves.

Despite the weightiness of its themes and content — genocide, sexual assault, brainwashing — Seven Devils is also unabashedly fun. It’s in the little details where the novel sparks to life, such as one character having the space version of a Scottish accent, which you know delighted me to no end, or in mid-battle flirting. Seven Devils isn’t reinventing the wheel here, but this summer, I think we all need a rebellious adventure.

Seven Devils by Laura Lam and Elizabeth May is available to buy on August 4, published by DAW in the US and Gollancz in the UK. Pre-order it now wherever good books are sold. My thanks to Gollancz for an advanced reader copy of the novel. Full disclosure: I am online friends with both authors.

← Dave Chappelle Is Low Key Running an A-List Comedy Club in Yellow Springs, Ohio | Review: Made in Quarantine, 'Host' Is A Way Better Horror Movie Than It Has Any Right To Be →