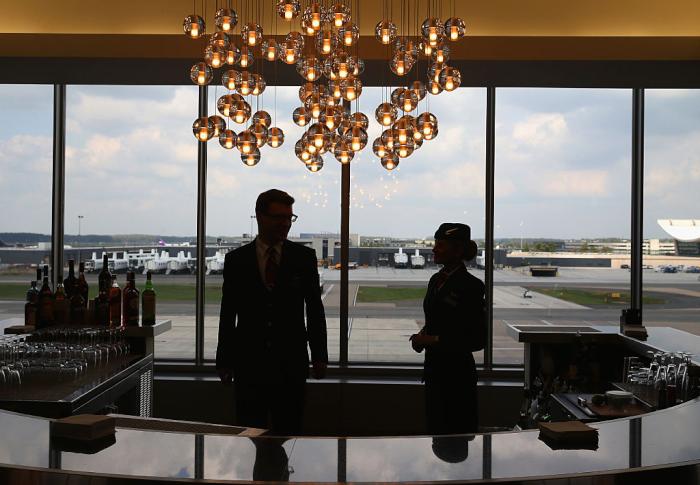 There Are Two Kinds of People: Those Who Get To the Airport Two Hours Before Their Flight or More, and Those Who Are Wrong

I hate air travel. Can’t stand it. It’s not the fear of flying—which I have inexplicably developed to a minor degree in my early thirties—or the impact it has on the environment. It’s the stress of the process that has grown up around it.

To try to ameliorate that stress, I like to stick to certain strategies. Chief among them is the brute force battering ram known as arriving really fu**ing early at the airport. It truly is a remarkable tactic. Airports are grim places. Between all the overzealous security, overpriced tat, and over…somethingsomethingtocompletethepowerofthree, no one wants to be there.

The only vaguely pleasant part of the airport experience is the magical little enclave known as the airport bar. That uncanny place outside space and time, where the normal rules of civilisation don’t apply and people gather to worship strange, ancient gods.

By getting pissed at 10 am.

Airport bars 100% fall under the aforementioned ‘overpriced’ category, and for that sin they should seek penance, but they are spared complete damnation because they perform such a vital, glorious function: Making air travel bearable.

Airport bars and getting to the airport at least two hours early. That’s the way to go. Barring the smaller, faster airport experiences like, say, Valencia, I cannot for the life of me fathom why people would choose to plan to arrive at the airport less than two hours before their flight. It makes zero sense to me. There are too many factors out of your control that need to be accounted for to be cutting it any closer. I’ve only ever missed one flight—a connecting one in Dublin from Boston to London—and that’s because I was too hungover to realise I was waiting at the wrong London gate until too late. It was stressful as fu*k. Why you wouldn’t do everything you could to minimise that horrible bullshi*t is beyond me.

This is why this tweet made me once again realise how incredibly differently people are wired from each other:

People who go to the airport two hours early, what happened to you as a child?

A lot of people, for what it’s worth, seemed to be on the side of the sane:

I'm sorry, what airport are you going to where you can count on parking, getting to checkin, passing your bags, getting to security, and then navigating to the gate within 60 minutes or less?

I missed a flight because I thought an hour would be plenty of time and was wrong. All following flights were full so I had to book same day with a different airline. No refund for the missed flight.

Sitting an extra hour in the airport is worth never going through that again.

ive been "randomly selected" for special screening every time i flew post 9/11 (from 10 yrs old til now) and it always takes way longer to get through security.

Starting to think its not so "random" 🤔

anxiety. I’m always worried that I accidentally have 47 guns and 3 bricks of coke stuffed into my ass so I want to get the security check over with.

My family accidentally left me home by myself at Christmas and two robbers tried to kill me, so I set up a series of elaborate booby traps, and luckily it all worked out, so, yea, I love having a preflight beer at the airport now.

But reading that tweet and thinking about it all made me wanna conduct a short little science symphony. So, please, hivemind, which is it: Do you arrive at least 2 hours before, or…