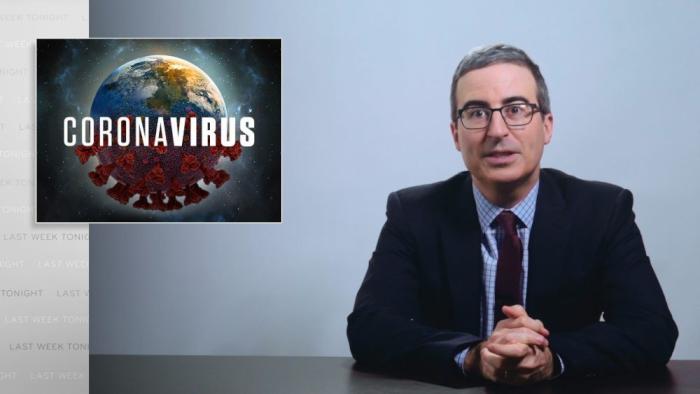 We Should Probably Defund Prisons Too

If you guys have been around here for any period of time, you might have noticed that I go out of my way to snap a screenshot that corresponds as much as possible with what I want to discuss on a Seth Meyers or John Oliver video (it’s ninety-five percent of what I do). But this time, I’m seemingly talking about prison abolition while the header is about COVID 19. Which means you should already be bracing for the absolute worst because nothing beats “prison” like “COVID in prison.”

So that sucks, right? Like a lot? Because being in prison is already significantly worse than it was initially designed to be, what with prison overpopulation and private prisons and a complete defunding of all other public services? So now on top of living in terrible conditions while you repay your debt to society, you maybe catch a very communicable virus while in prison and die for that check fraud you committed. Or maybe it was a really serious crime like sending your kid to the wrong school district?

Last Week Tonight has been covering the worst of the legal justice system basically since the show started, but it’s taken a while to get to a point where we start asking seriously, “why prisons?” And in a lot of the same ways that activists and protestors have pushed the Defund the Police movement into the mainstream, prison abolition is finally being talked about seriously. And in the same way that defunding the police has been a crucial examination of what social services we value and realigning our funding to reflect those prioities, abolitioning prisons isn’t about allowing criminals to roam the streets. It’s about acknowledging that prisons aren’t helping.

Prisons, especially those in the U.S., simply don’t help rehabilitate people. Because that’s not what they’re designed to do. Other than subjugating Black people (which is again, mostly what the legal justice system does) prison systems are about punishing people (and making money off of punishing those people because, f*ck it, why not). And the abolition of prisons gets at the deeper issue most Americans are going to have to face relatively soon: we’re a bunch of sadistic motherf*ckers.

One of our favorite national past times is hurting the hell out of people who step out of line. We’ve been taught that the reason that the U.S. has high levels of inequality, poverty, and homelessness compared to other wealthy countries is because that’s just how societies work out. There is a wild misconception that the reason we can’t have universal healthcare and livable wages is because we don’t have enough money. It’s a lie. We have all of the money and resources we need. We’re just choosing to use them on other things. We know that we’ve got enough food and technology to end hunger in the U.S., and we’re not doing it. We know that imprisoning people struggling with addiction is more expensive and less effective than treatment programs, and we still do it. We know that the most cost-effective way to end homelessness is to simply give people housing, and instead, we address people experiencing homelessness by f*cking criminalizing it (sidenote: can I talk to the geniuses who came up with that? Because I was considering being homeless and only decided it was a bad idea because it was against the law).

We like to punish people. We like it a sh*tton. Our prisons and parole systems aren’t helping anyone except for those of us who want to harm others as much as possible, punishing people for doing things we don’t like (again, we don’t just punish people for doing bad things or breaking the law. Not having adequate housing isn’t a moral failing, nor is it a harm to others (since most of the harm is experienced by people without housing)). The fact that most people are going to need to grapple with isn’t that prisons need to be reformed. It’s that they don’t need to be reformed because they’re functioning exactly as intended. You can’t reform a system that is designed to dehumanize and punish people into one that will rehabilitate them (and of course by “rehabilitate”, most people actually mean “afford the basic human services that one can use to create success, you f*cking a**holes). Our prison systems will continue to only be a reflection of what we feel we owe to those of us most in need. And we’re going to keep getting out of it exactly what we’re putting in.

← Why Is Henry Winkler Trending On Twitter? Because He Dunked On Trump | Never Forget How Terribly Michael Bay and Hollywood Treated Megan Fox →