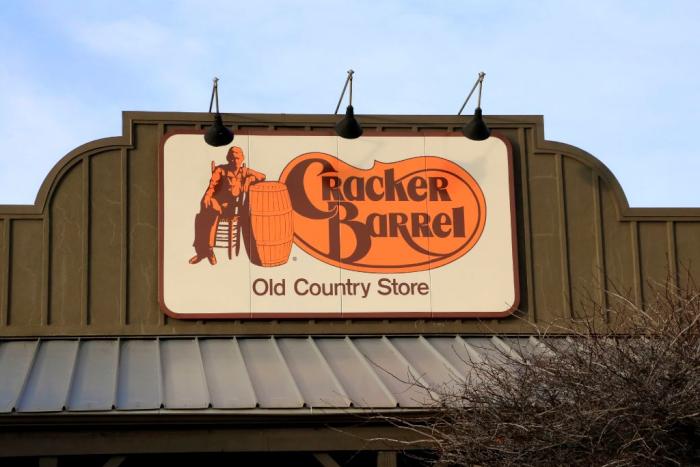 Meat is the best. The way it smells, the way it tastes, everything about it. I’ve put animals inside other animals. I’ve used 4 species in a single sandwich. I spent 5 days preparing a roast before it ever reached the oven. I’ll eat meat until my dying day which, if a family history of cardiac arrest is any judge, will be thanks to meat.

But meat eating in the modern world poses dilemmas. Factory farms are often cruel, unsafe, and environmentally toxic. It takes a lot of resources to raise, slaughter, and distribute various farm animals across the globe. And many people take moral issue with eating animals at all. Despite a daily meat habit, even I can understand that.

So why, in the name of all that is delicious, are people losing their shit over Cracker Barrel’s Impossible Sausage option?

Everyone’s having a normal one on the Cracker Barrel Facebook page pic.twitter.com/ohSg5UOZNm

Don’t get me wrong, I know why. It’s because we can’t have anything nice without it turning into the next front in the culture war. This is a particularly stupid one, on par with invading Ukraine during mud season or confusing a real grenade for a smoke bomb. People are freaking out over Cracker Barrel offering meatless alternatives more than they would if their church replaced the Eucharist with sliced pepperoni. I don’t want to tell people what to do — that’s a lie, I do, it’s why I had children — but this has to be the dumbest reason anyone got upset since The Terminal List sucked.

To a certain extent, this is a case of Facebook being Facebook. Everyone knows it’s your worst uncle’s favorite social media site. And to be sure, most of the complainers are the human equivalent of an upside down American flag. You know, folks who would clear their Outlook calendar entries for January 6th if they could figure out how without asking their gay, socialist grandson for help.

To be fair, the stereotype of the militant vegan is a thing for a reason, and every once in a while it’s true. I’ve met a few, though not nearly as often since I left my 20s behind. It’s a philosophy and those always come with a few fundamentalists. Never argue with a broccoli fanatic. But there aren’t nearly as many of them laser-focused on every meat-based recipe post. Cracker Barrel isn’t the only victim of this weird hostility either. America’s Test Kitchen posts a meatless meal about once a month. Here’s a sample of what happened when they offered a taste test of various meat-free ground beef substitutes. 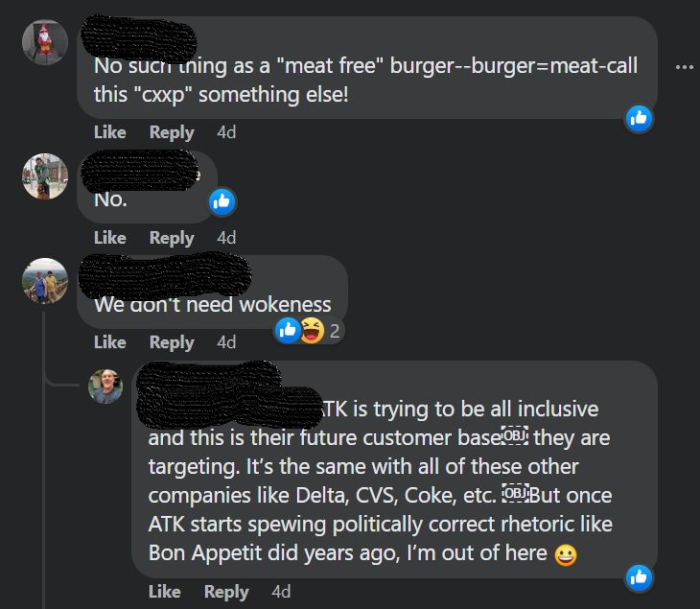 People reacted similarly when they suggested a cauliflower burger. 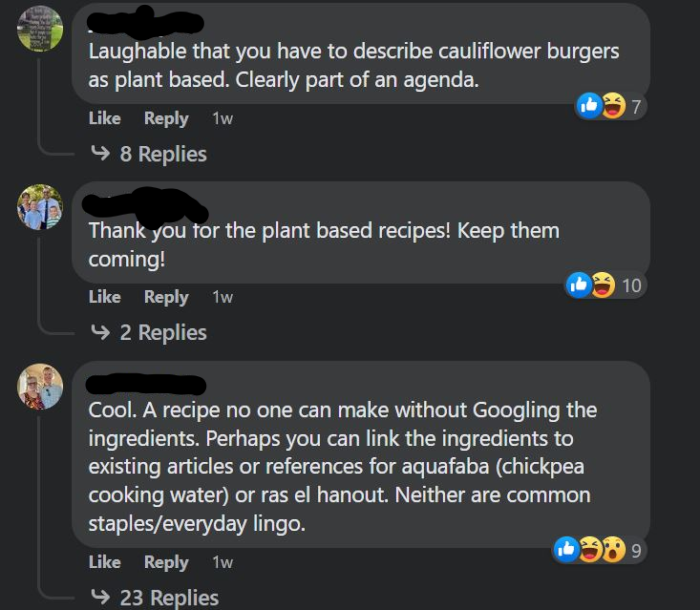 At least with the cauliflower, I get it. Cauliflower is what happens to broccoli when it sinned in a past life. Our current obsession with turning a vegetable that looks like a Morlock’s scrotum but tastes worse into everything from buffalo wings to pizza crust to cheeseburgers is a little bit crazy. But it doesn’t compare to the absolute insanity unleashed on Cracker Barrel for offering a meal no one has to eat and is visually indistinguishable from pork sausage.

THIS IS NOT WHAT CRACKER BARREL WAS TO BE ALL ABOUT pic.twitter.com/QC8E06iREz

I admit that here in New England Cracker Barrels aren’t a cultural touchstone like they are in other parts of the country and so my experience with them is limited. But from what I could tell a Cracker Barrel is about getting truck stop food without the benefit of a grill seasoned by 40 years of bacon grease or having to sit next to a trucker. It’s an Applebee’s decorated by Jon McNaughton. It’s a Denny’s without the thrill of wondering if you’ll make it home alive.

Is this the gay panic of breakfast foods? Are my fellow carnivores terrified that someone will slip them the ol’ Impossiburger and they’ll develop a taste for it? Do they dream of late-night popup restaurants where no one gets in without a password, where hooded men serve them confit brussels sprouts and meatish patties they don’t even have the common decency to wrap in a bun first? Should I quit day-drinking? The answer to all of these questions is Yes.

If you don’t want to try a meat substitute, don’t. I have, and they’re pretty delicious when cooked right. I don’t know if I’d mistake them for burger — though some brands of chorizo seitan come pretty close to the real thing — but that doesn’t mean they don’t taste good. So do black bean burgers and some veggie burgers. Frankly, any of the burgers built off beets taste like dirt and we all deserve better than that. Try something new. Don’t leave this world the same body temperature milk-drinker you came in. Live a little. Who knows; you might like it.