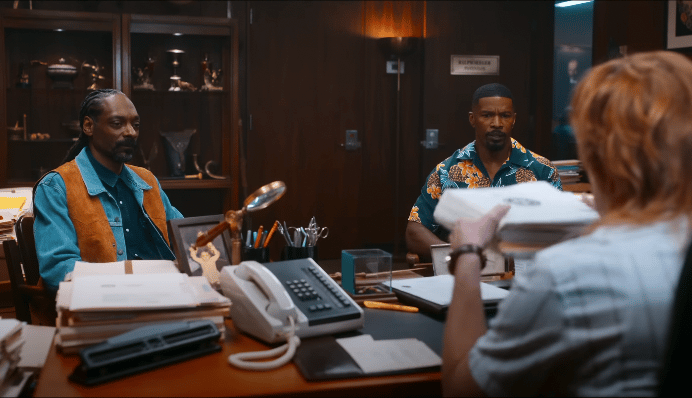 The ecosystem of film has shifted a great deal in the past decade or so, with superhero blockbusters crowding out smaller movies at the cineplex (and that’s when going to the movies is even an option, COVID permitting). It’s a cash grab ouroboros of studios devoting resources to sure-bet IP with endless merchandising potential, and theaters devoting screens to whatever lands the most butts in seats and keeps the lights on. When we talk about the diminished output of mid-budget movies, the conversation is often around cozy dramas or rom-coms or tense psychological thrillers — quality projects that lack the sort of dazzling technical wizardry we’ve been duped into thinking is necessary to warrant a night at the theater. What we don’t often bemoan is the loss of, well, crap — the mediocre movies with big ideas, bankable names, and barely enough talent scraping by behind to camera to keep things afloat. They’d open in third or fifth place at the box office, fade quickly, and then get a bump when the VHS or DVD landed at the rental store, back in the days before Netflix killed Blockbuster. What I’m saying is: Where are the well-intentioned, fitfully entertaining disasters? Where are the Johnny Mnemonics today?

Well, logic holds that they should be on Netflix, right? It killed Blockbuster, after all — it should be its destiny to take its place. Streaming platforms to a certain extent have helped keep the mid-budget film alive (Hulu’s recent success Palm Springs and even Prey is proof), and while Netflix has been known to occasionally outbid their competitors on an award-winner like The Lost Daughter, it usually sets its sights higher — or much, much lower. Netflix spends hundreds of millions of dollars on securing franchises that should be theatrical tentpoles, like Snyder’s Army of the Dead and the upcoming Knives Out sequels, and then they’ll dump out their loose pocket change on VOD-equivalent fare with no recognizable talent save for a single notable cameo to cut into the trailer (yeah I see you, Megan Fox in Night Teeth). The big stuff feels wasted, with lackluster marketing failing to uplift the properties (Glass Onion, the first Knives Out sequel, premieres at TIFF next month! It comes out later this year! We’ve seen like 3 photos from the movie so far! WHAT IS HAPPENING?!), while the small stuff is filler and treated as such. Meanwhile, there’s a whole realm of mediocrity, of fun Friday night escapism, of movies that bite off more than they can chew, that Netflix could easily corner the market on.

All of which is a very long preamble to say that Netflix has finally found its mediocre sweet spot — its Johnny Mnemonic — and it’s actually a riff on a whole other Keanu Reeves joint. Welcome to John Wick but with vampires! Welcome to Day Shift!

Jamie Foxx stars as the improbably named Bud Jablonski, a down-on-his-luck vampire hunter who masquerades as a pool cleaner in sunny Southern California. Bud needs to make ten grand in seven days or his ex-wife is going to pack up his daughter and move her to Florida, and to do so Bud needs to… be reinstated to the international hunter union that pays the highest price for vampire fangs. He calls up his old friend Big John (Snoop Dogg, in a cowboy hat) to give him a recommendation, and the union agrees to give Bud a second chance — provided he has a union rep accompany him on his hunts. Thus Bud finds himself saddled with an anxious by-the-book desk jockey named Seth (Dave Franco) as he scrambles to pull enough fangs to sell before his deadline without breaking any union rules along the way.

The John Wick comparison is earned, or perhaps created, thanks to the combination of forces that worked behind the scenes to make Day Shift happen. The film comes from the 87eleven Entertainment, a production company founded by John Wick franchise director and former stuntman Chad Stahelski with the express purpose of making … well, more John Wick-esque stuff (“The goal will be to generate high octane fare in the action genre, and the hope will be to hatch something that comes out of nowhere at a modest budget and establishes itself as the stylized franchise,” is how Deadline described the company when it formed). Day Shift is helmed by a first-time director named J.J. Perry, who also has had a decades-long career in Hollywood as a stuntman and second-unit director (including work on a few Wick installments). And then there’s the script, written by another newcomer, Tyler Tice — but with polishing done by Shay Hatten, who, yup, wrote John Wick: Chapter 3 — Parabellum as well as the upcoming fourth installment. Based on press interviews Tice gave, it’s pretty clear he wrote a cute little blue-collar vampire hunter movie with, like, maybe three actual vamp slayings in it, and then 87eleven came in and added about 300 more dead bloodsuckers to the proceedings.

Still, there’s a certain refreshing scrappiness to the proceedings that sets Day Shift apart from the slick Wick-verse we’re familiar with. The film was shot over the course of 42 days in the midst of the pandemic, and between the time constraints and the budget it had to get creative. The special effects are almost all practical, and a lot of it works — especially the contortionists Perry hired to give his vamps a unique physicality during the fights. Unfortunately, the movie frequently falls into the same poor-lighting trap we’ve seen lately, and there’s one laughably bad chase scene where motorcycles and cars explode at random — not because Bud out-drove them but because it’s clear time was simply running out on the shoot. The plot is a loose framework that provides just enough plausible cause to move the characters from one fight scene to the next, but inside that framework is hidden Day Shift’s secret weapon: The cast chemistry. Foxx and Franco ad lib the hell out of their Lethal Weapon-odd couple partnership, providing exactly the sort of off-the-cuff humor you’d never get in a Wick-flick, and Snoop seems to be having the time of his life as some sort of So-Cal Marlboro Man gunslinger guru. Even Peter Stormare and Scott Adkins make memorable, if slight, contributions to the story!

So no, Day Shift isn’t necessarily good… but it isn’t bad either. It doesn’t quite find the balance of horror-comedy-action it wants to, but it takes some big swings and offers fresh twists on the genres along the way. Mostly, though, it’s mindless fun for a Friday night, and that’s the exact sort of mid-budget mediocre sweet spot Netflix ought to be leaning into. Make this your franchise, Netflix! Let Jamie Foxx and Dave Franco punch more vampires, Netflix!

← 'They/Them' Is Very, Very Far from What It Was Aiming For | Did Jared Kushner Rat Trump Out to the Feds? →