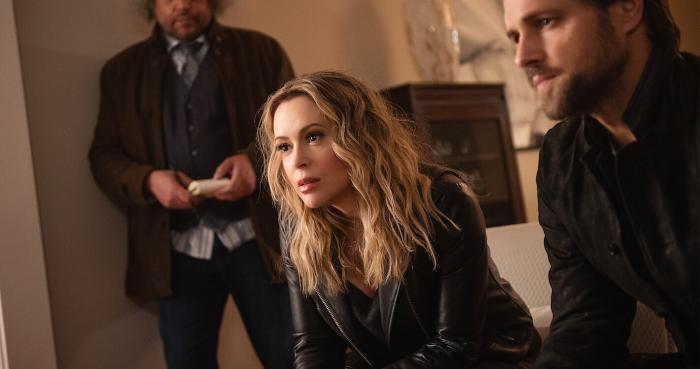 With 'Brazen,' Netflix Uses the TV Movie Cookie Cutter to Make its Own Batch of Vanilla Snacks

Milano takes the lead as Grace, the true-crime writer who gets her hands dirty by assisting police with investigations. When she’s called up by her sister, Kathleen (Ullerup), Grace sprints to her aid, cozying up in her suburban home. Kathleen has recently cleaned herself up after struggling with addiction and substance abuse and wants her sister’s guidance in going after her ex-husband to regain custody of their son. She’s a teacher now, able to sustain herself (in her stunning and sprawling house), and just needs help tackling her powerful ex to get her life on track. But what Grace doesn’t know is that, at night, Kathleen picks up some more pennies by performing as a dominatrix on a cam website. Behind a locked door, Kathleen dons a dark wig, obscures her face, and goes by Desiree while performing on Fantasy Inc.

After a night out with the steamy-dreamy homicide detective next door, Ed (Sam Page), Grace returns home to find her sister dead on her bedroom floor. The true-crime author and investigator has almost no time to grieve before thrusting herself into her sister’s murder investigation, one being led by her budding love interest. Soon, other women in the profession are being targeted by the killer, leading to an increasingly extended list of suspects including Kathleen’s students (with powerful parents) and her powerful ex-husband.

If that all sounds like a silly fantasy version of reality that uses a dead woman as a catalyst for a thrilling tale of vanilla sex and endless romance, that’s because it is. Like many a TV movie before it, Brazen’s murderous setup is but a frame for the spicy romance that comes with a dash of murder. (For real, the poster is of the two of them in a sensual embrace). So, it’s hard to chew up the silliness of a civilian being allowed to assist with the investigation of the murder of her family member, that she’s the only witness to, while dating the lead investigator because this isn’t about accuracy or reality, it’s about Yankee-candle-vanilla-scented escapism.

Though this flick certainly read the “Guide to PG13 Erotic Thrillers for Housewives,” it dashes in some fresh feminism for those dancing with the next wave of the movement. Grace shouts something about the patriarchy, but most of all, it has a somewhat refreshing look at sex workers and cam girls. No, it doesn’t do the same amount of work that Cam or PVT Chat did to humanize the workers in front of the camera, showing their jobs as real work, but it’s a bit radical that the cookie-cutter TV movie tackles the dangers of violent misogyny and the realities of the profession (albeit with a fantasy version of engaged law enforcement). Buried within it is a sub-comment on power structures and class discrepancy, but it’s mostly window dressing with the in-world police throwing all of their resources into the investigation and those in power having no real effect on any outcomes.

The actors and filmmakers came to work and did their jobs. The specific style of the TV thriller is immediately recognizable and comes with line deliveries, score, and editing style to match. It doesn’t make for poetic cinema, sure, but everyone seems to have (if I may use the cursed phrase) understood the assignment. It’s a toned-down and daytime-appropriate story of sex and violence that has no blood and no nudity but does come complete with a slasher villain monologue.

The evaluation of Brazen isn’t one of quality in measuring up to thrillers, romances, or even other TV movies. What makes it interesting is the story of the streamer’s business model pivoting to lap up the spray of its network competitors. If it was trying to borrow the cookie cutter and bake its own dozen, Netflix succeeded, I guess.

Brazen is now available on Netflix