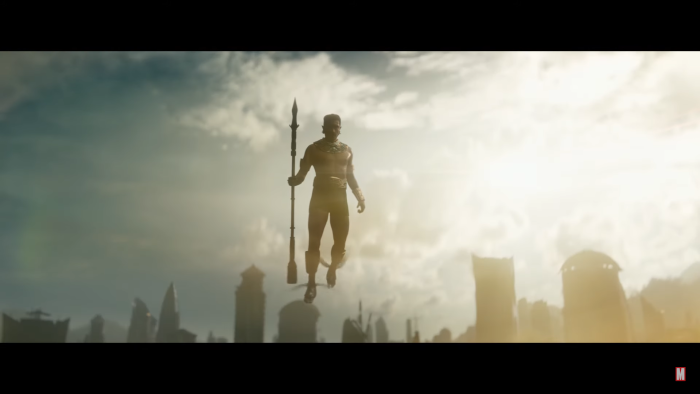 Black Panther: Wakanda Forever is a little over a month away. Today, Marvel Studios dropped a new trailer that gives us more details on the film’s “villain” (more on that in a sec), the recently confirmed mutant Namor. The trailer also gave us more of the character Ironheart and even ended things with a clear shot of the new Black Panther, presumably so the internet will stop analyzing the butt shot from the last trailer. That doesn’t mean they won’t, but I digress.

While this trailer still features shots of the funeral for T’Challa (the former Black Panther, impeccably played by Chadwick Boseman), it spends a great deal of time showing off Namor. The king, or in this case God, of Atlantis, is out in full force here. We see him sit on his throne, which appears to be a giant shark jaw! In a more tender moment, we see him painting a mural. There are also several shots of him flying, using his winged feet, which made me squeal. He looks incredible, and so far his motivations are hidden, likely because Namor is one of the better anti-heroes.

With the Rock-starring Black Adam fast-approaching (yet another studio attempt to make an anti-hero work) it’s impossible to ignore how similar that movie looks to everything else. Black Adam is an anti-hero, but his movie looks like most comic book adaptations that have come before it. Others may disagree, but I don’t think a comic book anti-hero has been done well on screen yet. Namor, so far, feels like he may turn the tide.

It’s always the same old thing. An anti-hero says they are not a good guy, they hurt or even kill people, then they find something they care about that turns them into a “regular” hero. All we know so far about Namor is that he is mad at the “surface world.” For someone that lives in the ocean, where we humans constantly dump oil, trash, and Morbius Blu-Rays, that makes sense. While we see him fighting the citizens of Wakanda, we also see sprawling, beautiful shots of his home in the sea. He seems like he’s being set up in a way that will lend itself more easily to anti-hero status.

While the trailer features plenty of Namor, we also get a look at Riri Williams (Dominique Throne), also known as Ironheart! The Iron Man protege is shown flying in what looks like Tony Stark’s Hulkbuster armor from Avengers: Infinity War. She’s set to get her own Disney+ show, but it’s exciting to know that we’ll see her don some armor on the big screen.

Last but not least, throw out all of your theories that Winston Duke’s M’Baku will be the new Black Panther. We now know, beyond a shadow of a doubt, that the new Black Panther will be female. It seems pretty likely that Letitia Wright’s Shuri will be putting on the suit, wild anti-vaxxing theories or not!

There is lots to be excited about in the new Black Panther: Wakanda Forever trailer. Even the new poster is rad as hell.

Who's first in line on November 11? pic.twitter.com/5KhpQAIFXs

Watch the trailer below and let us know what you’re looking forward to the most!