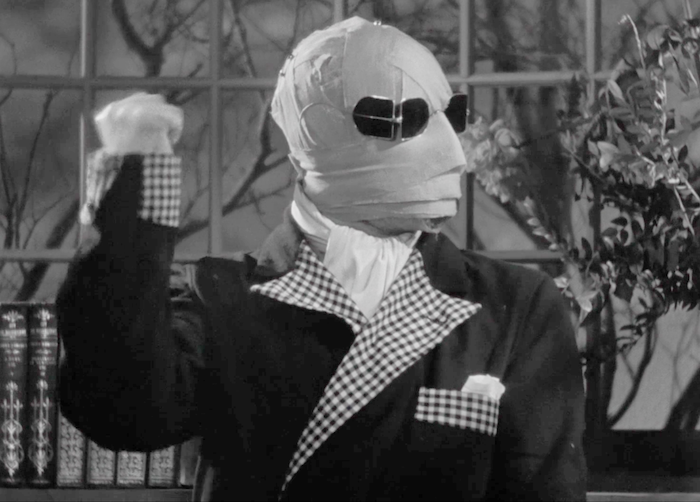 Joker would like you to know that we Live in a Society that’s terrible and we ought to Eat the Rich. And to a certain degree, you know, there’s a point to be made in this general direction, but to paraphrase our Kristy Puchko’s review, the execution is yikes.

Nevertheless, on one hand, it’s understandable, with these themes in mind, why some have responded as if Todd Phillips’ take on the Joker is a villain for our times. But on the other hand, it’s still really silly to stump the Joker for these reasons when there is a superior, more timely option with an actual sense of humor who’s been there all along: the eponymous mad scientist of James Whale’s The Invisible Man.

This might be the point where some of you are wondering how a character from a 1933 film adapted from a 1897 book could possibly be “timely.” There are two key reasons:

1. It is October, meaning that James Whale’s entire filmography is now considered “timely.”

Maybe you’ve seen The Invisible Man, but maybe you haven’t, in which case, let’s recap: 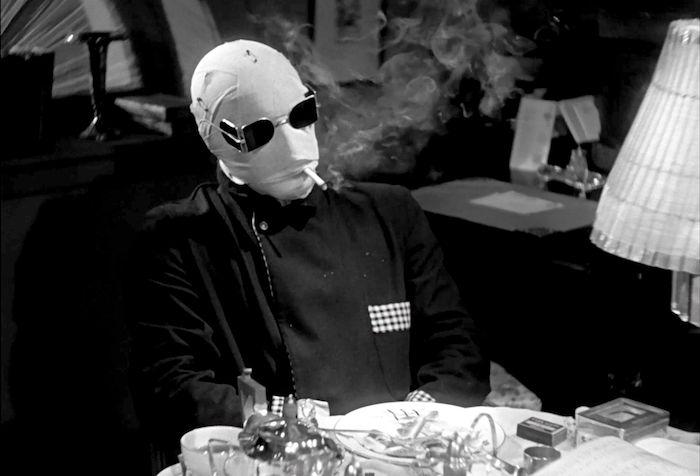 Meet Jack Griffin (Claude Rains). Jack is a young scientist. It’s important to recall that this story takes place back in the day when “man of science” was generally reserved as a pastime/profession for blue bloods with too much time on their hands and an interest in messing around with beakers. Jack, however, comes from far more modest means, and although his drive and intelligence were enough to catch the eye of respected chemist Dr. Cranley, Jack is basically a lab technician. But he’s got ambition — and he’s engaged to Cranley’s daughter, Flora, meaning he’s especially hungry to make something of himself so he feels like he’s bringing something to the table in their marriage.

As such, Jack works his lab job during the day and labors away feverishly on his own experiments all night, developing an invisibility serum using the rare substance known as monocaine. Griffin tests it on himself, and it works. Only, it works a little too well and shows no signs of wearing off, leaving him scrambling for an antidote. But as he has no lab of his own and no desire to get caught by Cranley, he shoves a bunch of lab equipment into a few suitcases and heads to a country inn seeking solitude.

The only issue is that all the village folk are hugely intrigued by the bandage-covered stranger who showed up suddenly in the off-season and will not leave him the f*ck alone. So they keep interrupting his science until Jack runs out of money to pay for his room, which leads to the following encounter featuring some of the most relatable “don’t kick me out my paycheck drops on Thursday please have mercy” body language ever seen in cinema. 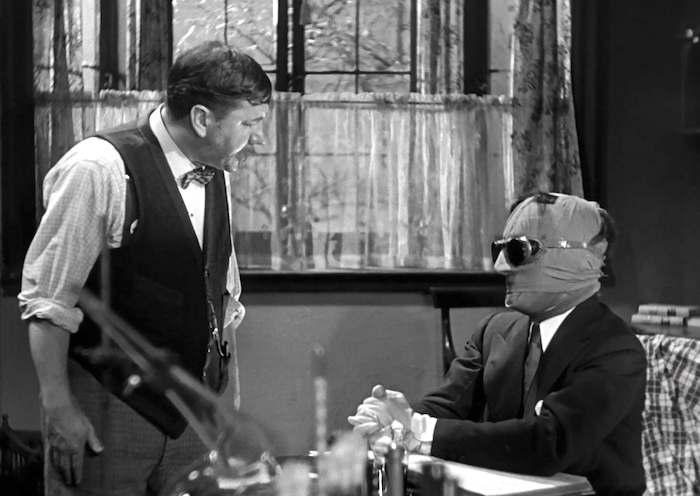 Spoiler alert: they do not have mercy, especially considering Jack can really be a bit of a dick. At this point, Jack loses his cool and the last remnants of his sanity. “All right, you fools! You’ve brought it on yourselves,” he warns the constable and the posse of locals gathered to apprehend him (any of this rhetoric sounding familiar yet?). Jack reveals his invisibility and the villagers flee in terror—until the constable realizes that “if he gets the rest of them clothes off, we’ll never catch him in a thousand years” and rushes back to try to apprehend the Invisible Man in a rather incredible strip-tease/standoff that concludes with Jack escaping and wreaking havoc across the countryside.

Now, I’ve mentioned Cranley but we’ve not discussed Kemp. Kemp, another junior scientist working under Cranley, is like the worst sort of finance bro. As a right honorable blue blood, he figures he’s Cranley’s heir apparent in all things and entitled to everything he wants, including Flora Cranley’s affections. Here’s Kemp figuring Flora imploring him to help her find her missing fiancée is a great time to hit on her: 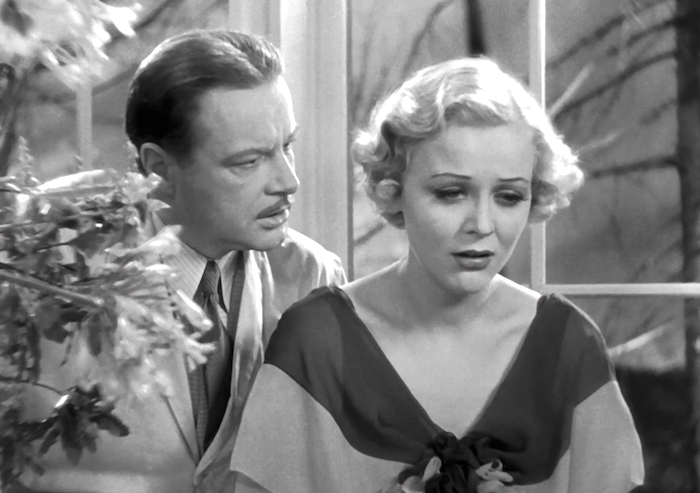 Yeah, Kemp’s the worst. Kemp, in representing everything Jack doesn’t have but also everything Jack hates, is basically his Murray Franklin. And much like in Joker, Jack confronts Kemp with a big villain speech (“Everyone deserves the fate that’s coming to them — panic, death, things worse than death”) and ultimately kills Kemp, but before that happens, he turns Mr. Entitled into his “partner” (read: minion) for a while and it’s pretty damn great.

Basically, tl;dr, if you’re looking for a crazy-ass white dude to quote/relate to/meme/inspire your Halloween costume, forget Arthur Fleck and go Jack Griffin. Sure, Joaquin Phoenix’s maniacal laugh is fine, but just wait until you hear Claude Rains’. And his rants? Don’t even get me started. This man rolls his “R”s deliciously.

Both films have crazy jokesters, but only one jokester slaps a cop on the ass and calls him a “naughty boy,” and with that, I rest my case. 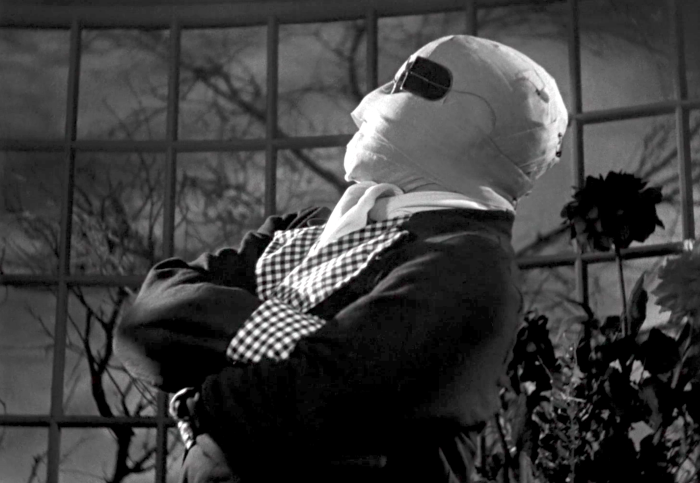 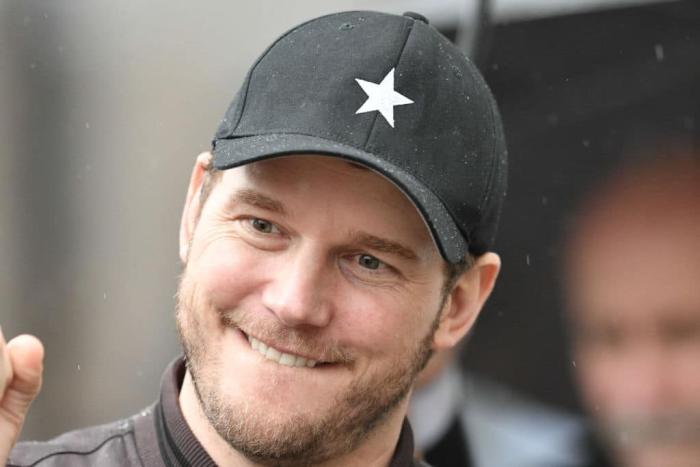