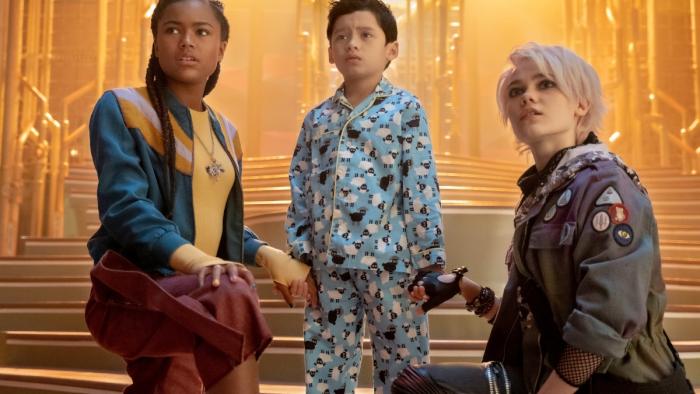 From Cleopatra to Frida Kahlo: Who Are the Historical Members of the Secret Society in 'A Babysitter's Guide to Monster Hunting?'

In Netflix’s latest adorable family movie, A Babysitter’s Guide to Monster Hunting, the boogeymen of many a child’s nightmares are all too real. Sorry kids, but your parents lied to you: There are monsters under your bed or in your closet and they’re definitely out to get you. The adults may not believe you but at least the babysitters do, as Kelly Ferguson (Tamara Smart) discovers when a regular night of looking after a young kid with an overactive imagination goes very wrong. Jacob, the son of her mother’s ice queen boss, is kidnapped by the Grand Guignol, a monstrous fiend played by a delightfully campy Tom Felton, who clearly hasn’t had this much fun since they used to give him actual scenes in the Harry Potter movies. Since asking the grown-ups for help with a child abduction case would result in a grounding and federal charges, it’s up to a secret society of babysitters educated in the magic and science of monsters to locate Jacob, stop the evil plans, and get home by midnight.

If you’re a kid who grew up on Hocus Pocus, Jim Henson, Adventures in Babysitting, and any number of Disney Channel original movies, then A Babysitter’s Guide to Monster Hunting is you for and your younger family members. Based on a series of middle-grade novels by Joe Ballarini (who has adapted his own books for the screen here), the movie is a savvy, if somewhat overstuffed, mixture of ’80s family fun, kid-friendly horror, and fantasy adventure stories. It wears all its influences proudly on its sleeve. At the center of this movie (and all the inevitable sequels that Netflix will make) is the International Order of Babysitters, an eons-old organization committed to protecting kids, fighting monsters, and making way more than $15 an hour for the privilege. As revealed by Liz, the sardonic pink-haired action-sitter played by Oona Laurence from Lost Girls and The Beguiled, some of history’s greatest icons were babysitters. Yup, in-between being pharaohs, artists, wizards, goddesses, and civil rights leaders, they were creature-fighting childminders. Hey, we all need a side-hustle, I suppose. So, which historical icons were secret members of the International Order of Babysitters? Let’s dive into it.

Cleopatra VII Philopator, the last active Pharaoh of the Ptolemaic Kingdom of Egypt, was more than just a famed beauty, lover of ass’s milk, and legendary seductress. It turns out she was also into babysitting. It’s unlikely that the real Cleopatra had time for such jobs during her childhood of studying to rule an empire and having sex with her brother. We wouldn’t complain, however, if they included this subplot in the upcoming Cleopatra biopic starring Gal Gadot.

The legendary wizard of Arthurian lore, Merlin has been a mainstay of Celtic folk tales and poetry for hundreds of years. Nowadays, the name Merlin and the stock figure of a bearded magic man is the stuff of basic fantasy fiction. Just as historians continue to debate whether or not a figure like King Arthur ever existed, the same ambiguity has followed Merlin. He was most likely derived from Myrddin Wyllt, a figure in Medieval Welsh legend (see mum, I AM using my Celtic studies degree!) In terms of his babysitting prowess… well, someone had to keep all those jerks at the roundtable in their place.

Yup. Really. One of the key figures in the mid-20th-century battle for civil rights, one of the faces of the Montgomery bus boycott, the woman that the U.S. congress named ‘the first lady of civil rights’ and ‘the mother of the freedom movement’… she was a magical babysitter. In real life, Parks studied sewing and quilt-making with her mother and grandmother as a child, then took academic and vocational courses at the Industrial School for Girls in Montgomery before entering the world of activism.

Jeanne d’Arc had a lot on her mind as a child, what with the Hundred Years’ War waging in her homeland, her regular visions of various archangels and saints, and her choice to disguise herself as a boy so that she could fight for the freedom of France. She did, however, have several siblings, so who knows, maybe she was on the regular babysitting beat too. I suppose she needed something to do before joining a military campaign.

Archimedes of Syracuse was an ancient Greek mathematician and astronomer who is widely seen as one of the greatest scientific minds of all time. So, if you were in need of someone to babysit your damn nerd kids, I suppose you could do worse. He could explain how levers work to them!

I’m not sure how Frida Kahlo, one of the true legends of 20th-century art and an enduring icon of left-wing politics, would feel about being labeled a magical babysitter. Kahlo famously suffered a horrifying accident at the age of 18, after a bus crash left her with medical problems that would plague her for the rest of her life. Many of her most famous paintings were inspired by this event as well as other milestones in her life, from her struggles with miscarriage to her examination of her gender and sexuality to her tempestuous marriage to Diego Rivera. At least if she was babysitting you, you’d probably get to hear some amazing stories about that time she had an affair with Trotsky. Perhaps the evil monster she fought was capitalism.

The lady with the lamp seems like a solid choice to appropriate as a babysitting icon. Her legacy as one of the pioneering social reformers of Victorian Britain endures to this day, as well as her status as one of the key figures in the development of modern nursing. She’d be a babysitter who knew what to do when their kid skinned their knee or was violently shredded to pieces by a nightmare monster. Well, her or Mary Seacole, but she wasn’t listed as a member in the movie.

Amina is one of the major icons of Nigerian history and folklore. The Hausa warrior queen of the city-state Zazzau, she ruled in the mid-16th century and was widely celebrated for her prowess in war and a legendary number of lovers. A lot of the true facts of Amina’s legacy have been obscured by centuries of mythology and folk tales, so hey, maybe she did her fair share of babysitting before she took the throne.

One of the more recent historical figures listed as a member of the International Order of Babysitters, Maria Tallchief was the first Native American prima ballerina and one of the first stars of the New York City Ballet. She was a muse of the legendary choreographer George Balanchine, she performed with the Bolshoi Ballet, and she received a Kennedy Center Honor in 1996. Tallchief is a name that I would assume most of the young people watching A Babysitter’s Guide to Monster Hunting have never heard of, so her inclusion here was a sweet touch.

Another historical icon whose story may be unknown to many, Noor Inayat Khan was the first female wireless operator to be sent from the UK into occupied France during the Second World War, during which she served as a spy in the Special Operations Executive. She was betrayed by one of her fellow agents and executed at Dachau in 1944. Her story is honestly far too fascinating for me to sum up in a mere paragraph regarding a kids’ horror movie. Seriously, let’s get a movie about her life!