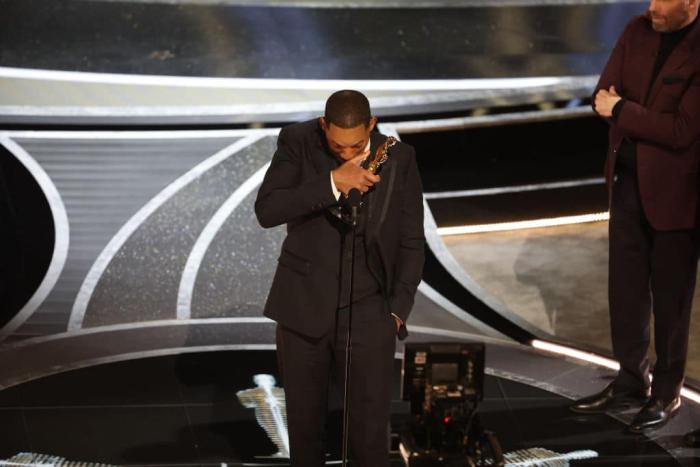 What the Hell Just Happened at the Oscars?

There’s so much to discuss regarding last night’s Academy Awards. History was made in several ways, with Troy Kotsur becoming the second deaf actor to win an Oscar and Ariana DeBose picking up Best Supporting Actress and celebrating her victory as a proud queer Afro-Latina woman. Jane Campion, an undeniable legend who has influenced a generation of female filmmakers, took home Best Director, and Apple broke through the streaming barrier with a Best Picture win for CODA. It was an evening with much to celebrate, even if the winners themselves were relatively safe and predictable (Belfast for Best Original Screenplay?!)

But, let’s be honest, that’s not what we’re going to remember from this ceremony. I was watching the Oscars in the UK, which meant that I had the unedited broadcast. So, I watched as Will Smith, the season-long front runner for best actor, got on stage and slapped Chris Rock for cracking a joke about his wife Jada’s baldness (she suffers from alopecia and has been candid about her struggles.) I sat slack-jawed in silence as I heard Smith scream at Rock, ‘keep my wife’s name out of your f**king mouth’ twice. We all took to Twitter to wonder if it was a skit gone wrong or something easier to comprehend than one of the most famous men on the planet committing an act of assault on live television. But no, that’s actually what happened.

When Will Smith took to the stage to accept his Oscar for his leading performance in King Richard, you could feel the palpable awkwardness coming from the audience of the Dolby theatre. As Smith’s rambling and deeply emotional speech went on, I couldn’t help but feel like I was watching something I wasn’t supposed to watch. It was tough. It wasn’t fun. Honestly, it was sad.

We all knew Will Smith was going to win. It was maybe the only true lock of awards season. Smith didn’t do a massive amount of campaigning for the film, but when he did appear at events, he was as charming as ever. Rooms full of the industry’s best and brightest leaped to their feet in applause for him, time and time again. Regardless of whether or not you think Smith deserved to win for the film, it was undeniable that this moment meant a lot to him. It seemed to be a validation of sorts, and even real Oscar cynics felt that his victory was due. So watching that speech, where he talked about protecting his family like Richard Williams, and how love makes you do crazy things, was very different from how we expected his acceptance speech to go.

What should have been the pinnacle of a long, fruitful, and influential career became a pseudo-apology-slash-justification-slash-confession for what will easily count as one of the most awkward moments in live television history. It bears repeating: we watched Will Smith slap a man on live television. How the hell are we supposed to talk about anything else? Regardless of how invested we were in the rest of the night, nothing could overshadow or really compensate for that moment. Clearly, Will Smith himself knew that. The pain of regret was etched onto his tear-streaked face.

That obviously makes it really difficult to discuss the mundanities of an award ceremony, one we were all not so secretly hoping would be kind of chaotic. Going into this year’s Oscars, fans were wondering how bad things would get, thanks to the terribly insulting decision to shunt several categories into shoddily edited also-rans in-between the bigger prizes. It never stopped being glaringly awful, in large part thanks to the sheer amount of time dedicated to bad comedy skits. The trio of hosts — Regina Hall, Amy Schumer, and Wanda Sykes — weren’t bad. Indeed, they brought some good jokes and worked well together. But every time you had to sit through another skit or ad for the Academy Museum, you couldn’t help but wonder why this time wasn’t given over to the sound team for Dune or Riz Ahmed winning for Best Live-Action Short. Sure, it’s nice that you waited your whole career for this sliver of recognition, but now we need the surfer who was on Baywatch to introduce a montage of Bond films. To add insult to injury, they still played off those winners.

The Academy and ABC have been desperate to break out beyond the shrinking audience who tune in year after year. Never mind that the ceremony is still one of the most-watched live events on television and ad dollars soared this season. Moments like the fan-voted sequences fell flat and elicited the gentlest of golf claps in the auditorium. Army of the Dead versus Minimata was a Tumblr fandom tiff made flesh for network TV and the only people who seemed to understand that weren’t at the table making the decision to include it on the show. Overall, the production was weirdly cheap and rushed. Why not go from the Bond montage straight to Billie Eilish singing ‘No Time to Die’? Why not have Chloe Zhao present Best Director to Jane Campion over a strangely mournful Kevin Costner? It all fell in such sharp contrast to the gorgeous and truly cinematic opening provided by Beyoncé. None of this seemed to provide ABC with that viral moment they so eagerly sought. What did was a true cursed monkey’s paw moment.

I’m sure that Smith will inspire a slew of think-pieces and myriad reactions from the industry and his fans alike. As I write this piece (at 5 am in Dundee, running on fumes and Doritos), the terms ‘apologize,’ ‘Good for Will’ and ‘Kanye’ are trending. Some are applauding him for standing up for his wife. Others want him arrested. Many are discussing the context of Jada Pinkett-Smith’s alopecia and the discrimination faced by chronically ill individuals, especially Black women. Some of the pushback to Smith also feels undeniably rooted in some bullsh*t ‘scary Black man’ stereotypes. The Dolby Theatre crowd still leaped to their feet for Smith upon his victory.

I don’t know if I’m the right person to fully unpack what’s going on, especially in the immediate aftermath. To be honest, my mind is still stuck on ‘what the hell just happened?’ Smith has spent his entire career being Will Smith the Megastar, the perennially charming leading man who is always ‘on.’ He’s only the fifth Black actor to take home Best Actor, a superstar who fought for the recognition he earned and deserved. Few people in film are as near-universally beloved as he is, even in this moment. Yet it is that moment that will probably define his career as much as the Oscar. It’ll define the night, not the historic wins for other categories of the moments of unbridled joy brought to us by Kotsur and DeBose. There’s something deeply sad about that fact. Wherever the conversation goes from here (and it will be led by voices far more knowledgeable and necessary than mine), I hope we can all take a moment to appreciate those other winners and what they mean to those who mattered. It’s not as though they seemed to matter much to the Academy or ABC.