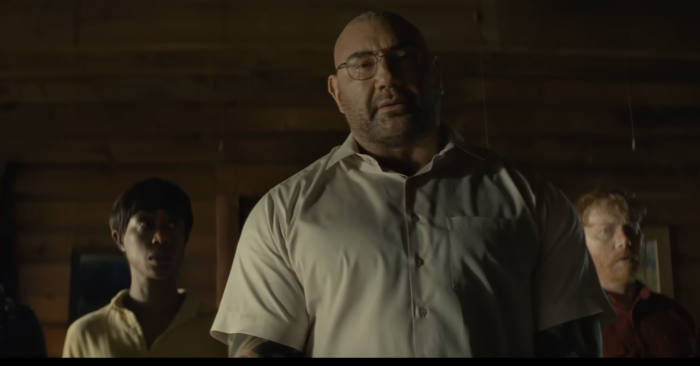 We have heard very little about Knock at the Cabin during production, and the trailer for the latest M. Night Shyamalan film seemingly came out of nowhere. After a rough five-year stretch (The Happening, After Earth, The Last Airbender), M. Night went small again with 2015’s terrific The Visit and he’s been on the upswing since (Old was … oh, you liked it. Admit it! It was fun!)

In Knock at the Cabin, Dave Bautista continues to be the acting man’s The Rock, and here he stars with Jonathan Groff, Rupert Grint, and a very cute little girl played by Kristen Cui. Two dads take their daughter out to the cabin, get an unexpected visitor in Bautista’s character, and are forced to make a choice to stave off the apocalypse. “If you fail to choose, the world will end.”

So, you know: The usual.

Knock at the Cabin opens in theaters on February 3rd, 2023.

← Would You Believe Adam Levine Messaged More Women? | Olivia Wilde Answers All the Questions She Shouldn't Have to Answer About 'Don't Worry Darling' →