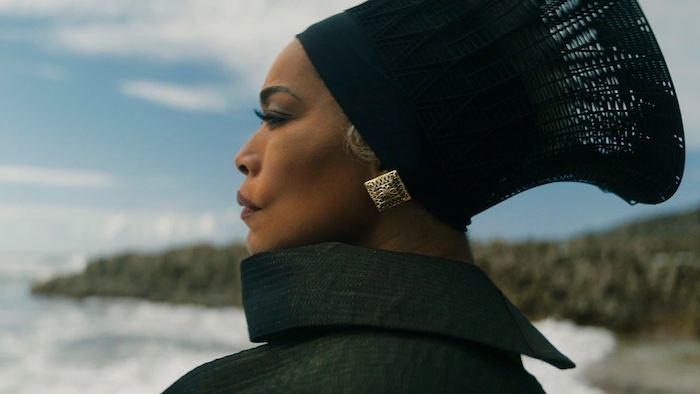 Black Panther: Wakanda Forever is many things — a continuation of the juggernaut that is the MCU, an introduction to the next generation of superheroes, a revisit to the fictional kingdom of Wakanda, and a loving eulogy to a beloved actor, taken from us far too soon. It’s when it focuses on the latter two that it’s at its most wonderful, and the former when it struggles the most. When the film lets all the crushing pressures of the MCU narrative take a backseat, it’s a wonderful film, worthy of Chadwick Boseman’s legacy and a strong representation of the diversity and beauty that can be possible in the superhero genre. When it shoehorns in excessive characters and plot points, it often stumbles under its own weight.

Make no mistake, though, Wakanda Forever is a gorgeous, moving film. Writer/director Ryan Coogler made the wise decision not to recast T’Challa and instead used the film as a source of catharsis for its fans, cast and crew. Reeling from the untimely (and unspecified) death of its king, Wakanda is a nation mourning, rendered raw and emotionally devastated by his loss. Using his remaining family — sister Princess Shuri (a bracing and moving performance from Letitia Wright) and Queen Ramonda (a powerhouse Angela Bassett) as stand-ins for the whole nation, the film is an ode to grief, a lovely and heartrending homage to his life and legacy (both Boseman and his character). Woven into that tapestry of tragedy is the introduction of a new power in this ever-expanding universe — the mythical underwater kingdom of Talokan, ruled by the god-king Kʼukʼulkan (Tenoch Huerta Mejia), more conventionally known as Namor. Namor wants to seize upon the perceived weakness of Wakanda’s mourning to force an alliance and wage war on the rest of the world over the colonial aspirations of the West.

These are the moments where the film shines the brightest. Mejia is spectacular in his debut as Namor, a character whose people and kingdom are now rooted in post-colonial Mayan culture in history instead of the comic’s more conventional (and Caucasian) Atlantis. It’s a clever change that allows for a much deeper, more complex sociopolitical exploration and ties in neatly to the struggles that the Wakandans have faced. Trust Coogler to give us a nuanced, intelligent adversary once again — Namor isn’t a scheming villain, he’s a vengeful, protective leader who grows tired of the surface world’s increasing incursions. His scenes with Wright’s Shuri are particularly affecting — the two play perfectly off each other, creating a riveting dichotomy.

This brings us to Wright herself, who found herself the unexpected main character of the film following Boseman’s death and the subsequent unanticipated rewrites. At this point, it’s barely a spoiler to say that Shuri takes on the mantle of the Black Panther, and she manages it with a grace befitting of Boseman’s heir. Yet it’s the road she takes to get there that is so remarkable, coping with grief, rage, love, despair, and hatred all at once, pulled in different directions by the maelstrom of emotion that comes with being thrust into a nation’s spotlight so unexpectedly and so tragically. Make no mistake: All the Wakandan cast is amazing here. Bassett is strong and powerful as the mourning Queen Ramonda, Danai Gurira and the other Dora Milaje (Florence Kasumba and Michaela Coel) are brilliant as the protectors whose leader is felled by something they couldn’t stop. Winston Duke’s M’Baka evolves into a trusted advisor while still brightening the film with spots of comedy. But it’s Wright and Mejia who carry the film on their shoulders and they do so with unflinching gravitas.

Kudos is also due to Coogler and company’s unparalleled worldbuilding. The nation of Wakanda continues to be a colorful, bright, breathtaking place that hums with energy and life. It’s a wholly fictional place that feels real, like a place you could reach out and touch. Costume, set, and sound design are all flawless in contributing to the depictions of everyday life of Wakanda. Similarly, the underwater kingdom of Talokan is a wonder of natural and supernatural, teaming with oceanic flora and fauna, dazzling architecture and visual flair. Add in another superlative soundtrack and music composition and you’ll wish that Marvel would give Coogler the reins to the MCU as they did with the Russo’s for the last phase.

All of that makes for an overwhelmingly positive experience, full of vibrance and excitement (the action choreography could be its own review, but the short, spoiler-free review is: it’s kinetic and engrossing without feeling excessive). Yet despite all those things, there are elements that sometimes grind things to a halt.

There’s an entire subplot dedicated to Riri Williams (Dominique Thorne), a young college prodigy who develops some astonishing technology that sets some of the film’s events in motion. Thorne is great — no complaints about her brassy-yet-vulnerable performance. And props to the MCU for bringing in a new, fresh young Black character into the fold. But her subplot and what comes with it felt tacked on, extraneous, and unnecessary. Her part is meant to also serve as a jumping-off point for a Ms. Marvel-esque miniseries on Disney+ called Ironheart, but it felt like added weight to an already overstuffed film. This paired with another subplot involving Everett Ross (Martin Freeman) serve as more distraction than adding any depth to the story. Not that Ross doesn’t belong in the story, he just didn’t need an entire plot thread dedicated to him serving to tangle the story up rather than bolster it.

Don’t let those things dissuade you though - there are 120 minutes of beauty within that overstuffed 161 running time. It’s a shame that in this of all films — a love letter to a character poised to become a true franchise giant and an actor we thought we would have and love for years to come — that Marvel had to cram in parts of its already messy extended narrative. Yet it doesn’t take away from the film’s overall excellence, it’s gorgeous visuals, its rich cultural roots, a story that manages to be weepy and uplifting, meditative and exhilarating. It’s brimming with note-perfect performances and directed with the skill of one of our best working directors today. Ultimately, flaws aside, Wakanda Forever serves as an impressive and worthy continuation of this kingdom, its people, and the stories that we’ve come to love.


← Episode 10 Recap: 'Andor' Delivered a Jailbreak and One Helluva Shoe Drop | Highlights (and Lowlights) from the Dave Chappelle Hosted 'SNL' →