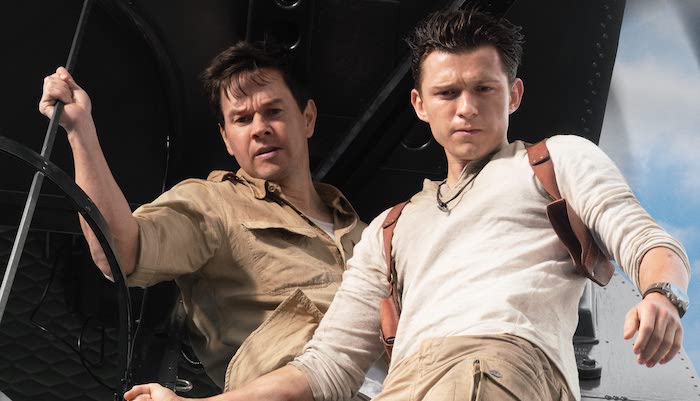 'Uncharted' Fails In Every Conceivable Way

Aside from the usual challenges faced by adapting anything — book, comic book, video game, toy line — into a film, there are always two fundamental questions that critics can (hopefully) ask: 1) Is it a good adaptation of the source material? and 2) Is it a good movie, regardless of the quality of the adaptation itself. Quite often, we discover that it’s not a faithful adaptation, yet can still stand on its own. And on the other hand, there is the occasional adaptation that is meticulously faithful, yet ultimately fails as a film. It makes for an often complicated and conflicting review process.

Uncharted, the newest film from Zombieland director Ruben Fleischer based on the Sony PlayStation franchise of games of the same name, simplifies this dilemma. Thus, the critical process is simplified because the film sucks both as an adaptation and on its own merits (or lack thereof). I am an unabashed fan of Naughty Dog’s Uncharted video game franchise — it’s a thrilling, exciting, Indiana Jones-esque series of adventures featuring brash, complex main treasure hunter Nathan Drake and his partner/friend/mentor Victor “Sully” Sullivan, a grizzled old salt of a man with a heart of gold who loves Nate like a son. The games usually span multiple countries and continents in a harrowing quest for some great shiny object lost to history, but also feature a surprising number of emotional twists peppered into their narratives.

Fleischer and his team of screenwriters cobbled together a story that pulls from all three games in the Uncharted trilogy, while also merging it with a story of its own. It’s — depressingly — an origin story of sorts, which is in and of itself unnecessary. One of the wonderful things about the game is that it simply drops you into the adventures of Drake, and lets his history and his past play out over the course of the trilogy. The film gives us a significantly younger Nathan Drake (Tom Holland), an itinerant bartender in New York City with a passion for history and its treasures. He’s singled out by a shifty fortune hunter named Sully (Mark Wahlberg) to help him find billions of dollars in lost Spanish gold, aided by yet another untrustworthy hunter, Chloe Frazer (Sophia Taylor Ali). From there, the trio travels the globe in search of fortune and glory, fighting a wealthy, greedy villain (Antonio Banderas) and his crew of mercenaries.

I suppose we can start with why it’s a poor adaptation, and that’s fairly simple — Holland is too young, too sweet-faced, too plucky to adequately represent the weary-yet-relentless Drake, and the move to make him younger falls flat. Far worse is Wahlberg as Sully (seriously, did they see that his name was Sully and just automatically go for the Boston dipshit?), who doesn’t feel even remotely like the game’s character. The two of them spend the bulk of the film double-crossing each other, suspicious of each other, and antagonizing each other. There’s no charm, no rapport to their bond because up until literally the final five minutes, there’s barely a bond at all. As for the story itself, it’s so blandly generic that it might as well have been a low-rent Syfy adaptation or an Asylum Films production. There’s none of the mystery, none of the complexity or nuance of the game’s narratives.

This obviously ties into why it fails as a film, but that is a far less complicated answer: it’s boring. Uncharted is somehow a two-hour film about a globe-spanning quest for treasure that isn’t even remotely exciting. There’s no real sense of stakes, the characters are ultimately too unlikeable to bother to root for, and the enemies are so bland that there’s really nothing left to keep the viewer interested. Sure, Holland does his best and as an action star, he’s remarkable. He’s quick on his feet and fun to watch but given little to work with. Wahlberg just … Wahlbergs his way through it, ham-fistedly biting off his dialogue while sneering and flexing his jaw, and generally being a condescending asshole to everyone around him. Sophia Taylor Ali’s Chloe seems to be at least trying to make lemonade out of the piss-poor material she’s given, but don’t get me started on Antonio Banderas in what might be the laziest, least interesting performance of his career.

It’s a shame, really, because in better hands and with a more mature, effective cast, there’s great material to be mined from the games. The filmmakers, however, opted for the path of no resistance, and instead created a lackluster, inert adaptation that can’t be saved from its plodding story, unlikeable characters, tiresome and cliched dialogue, and ineffective, unexciting effects. We can toss this one onto the ever-growing heap of failed game adaptations, another one to be resented by fans and forgotten by filmgoers.