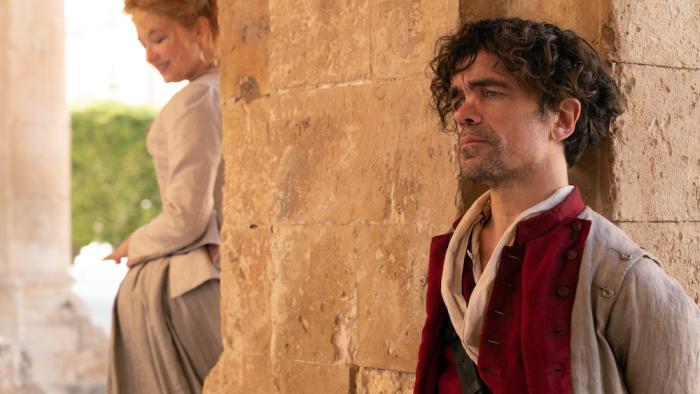 Trailer: Do We Need Another 'Cyrano'? Will You Reconsider for Peter Dinklage?

I am as skeptical as most of you about yet another iteration of Cyrano de Bergerac, especially when it’s hard to beat Steve Martin’s ‘88 version, Roxanne. But the trailer for Joe Wright’s Cyrano ultimately won me over, not just with Peter Dinklage in the title role, but the fact that it’s — yes — a musical, and a heartfelt one, at that.

In Cyrano, the oversized schnoz most associated with the character is gone, and instead, the poet has a form of dwarfism known as achondroplasia, and is considered a “freak” by a man who loses his wig in a swordfight with him. Dinklage also originated the role in an off-Broadway musical written by his wife, Erica Schmidt. Haley Bennett is Roxanne, Kelvin Harrison Jr. is Christian, and Ben Mendelsohn is De Guiche, and the music comes from Bryce and Aaron Dessner of the National.

Cyrano opens in December and, like The Greatest Showman, hopes to generate word-of-mouth holiday audiences well into January with a rousing musical.

← 'La Brea' Day Two: What's Up with the Handprint Symbol? | 'The Daily Show' Tackles The History Of Religious Exemptions In The U.S. →