Last week, the internet watched as the Sony and Marvel agreement to share Spider-Man imploded in real-time despite the fact that the collaboration between the two led to a billion-dollar box-office for Spider-Man: Far From Home. It was a shock, and yet not a shock, because eventually one of the two sides was going to get greedy — or both in this case — and that’s generally when things go to sh*t.

Anyhow, in the midst of what’s shaping up to be a nasty divorce, I did not expect to see Tom Holland make an appearance at Disney’s D23 expo over the weekend, where he confirmed that he’s on board with Sony’s plans for a Spider-Man that’s no longer connected to the MCU.

“Basically, we’ve made five great movies,” Holland told EW. “It’s been five amazing years. I’ve had the time of my life. Who knows what the future holds? But all I know is that I’m going to continue playing Spider-Man and having the time of my life. It’s going to be so fun, however we choose to do it. The future for Spider-Man will be different, but it will be equally as awesome and amazing, and we’ll find new ways to make it even cooler.”

In Holland’s defense, his hands are pretty much tied here. He’s contractually bound for at least one more movie, and his non-Spider-Man projects have taken some hits. He’s still attached to star in Uncharted, which lost its director literally two days after the Sony/Marvel split. The timing couldn’t have been worse. Meanwhile, over at Lionsgate, Holland filmed a YA movie with Daisy Ridley that’s being called a $100 million “unreleaseable” mess. So, of course, he’s going to toe the company line for Sony. Plus, he genuinely seems like a cordial chap.

In fact, here’s Holland continuing to go to bat for Sony at a fan convention in Philly on Sunday. Via CBR:

“It’s not the end of me playing Spider-Man,” Holland told an audience at Keystone Comic Con in Philadelphia, Pennsylvania. “There’s definitely more to come. We sat down with some of our creatives. We pitched Spider-Man 3, which is going to be something very special, it’s going to be something very different. I’m just so grateful that Marvel changed my life and allowed my dreams to come true and Sony allowing me to continue living my dream. It’s a crazy week and it’s never been done before so we’ll see how it goes and it’ll be as amazing and as fun.”

Holland’s not the only one who talked about the future of Spider-Man. Marvel Studios head Kevin Feige also said words to EW that make it sound like the MCU is ready to move on because it got everything it wanted from the deal.

“I’m feeling about Spider-Man gratitude and joy,” Feige told EW. “We got to make five films within the MCU with Spider-Man: two standalone films and three with the Avengers. It was a dream that I never thought would happen. It was never meant to last forever. We knew there was a finite amount of time that we’d be able to do this, and we told the story we wanted to tell, and I’ll always be thankful for that.”

I’m gonna call bullshit on that last part. If Marvel was truly done with the character, they would’ve just let the original arrangement run its course. Instead, there were clearly talks to keep the deal with Sony going, but it exploded mid-negotiation and here we all are gawking at the blast crater. On top of that, Feige might talk a good game about the two studios amicably going separate ways and how much everyone loves Tom Holland, but behind the scenes, there’s a nasty fight brewing over who gets custody of Homecoming and Far From Home director Jon Watts.

I’m told he’s being courted by Marvel. It is understandable that Marvel and Feige would want to keep things going with Watts: Feige has a strong track record of helping to change the career trajectory of filmmakers who wouldn’t have been automatic choices for mega-budget superhero films — from Joe & Anthony Russo to Taika Waititi, James Gunn and Scott Derrickson. As for one-upsmanship, there are bruised feelings between those studios over the Rashomon-like press narratives that followed Deadline’s scoop, over who did what in dismantling a brilliantly orchestrated introduction of a hit superhero franchise. It has gotten so bad that some wonder if it would even be possible for them to rethink things and come to terms on Spider-Man.

If Marvel keeps Watts in the fold, that’s a huge “f*ck you” to Sony. Then again, Sony had to know that Watts is in the wind before this whole thing went down, so maybe they think Tom Holland and the Spider-Man brand are enough to keep the train moving? Who the hell knows at this point?

However, it should be noted that Jon Favreau is optimistic that the two sides will reach an agreement, and he would know. Favreau basically launched the MCU, starred in both Spider-Man movies, and is neck-deep in everything Disney right now. I think he might have some insights.

“We’ve all read rumors, we’ve all read press releases, but you never know what’s going to happen. I’m holding out hope and being optimistic that this isn’t the final chapter of that story between those characters. I would love to see those characters continue to share the screen together. And I don’t just mean Happy and Aunt May, I mean Tom Holland, Spidey and the other heroes from the MCU.”

Or maybe this was just a thirsty statement about Marisa Tomei. If so, who among us… 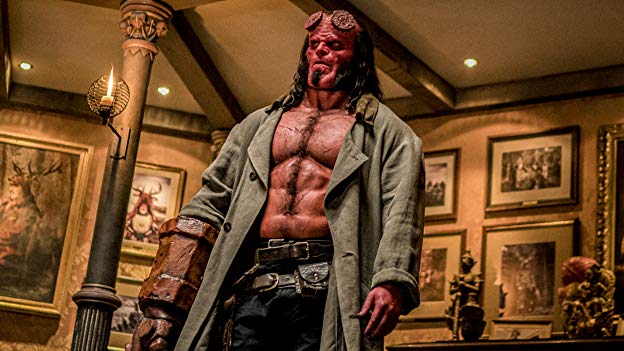 If You're Thinking About Watching The 2019 'Hellboy', Consider Reading This Explanation Of Its Plot(s) First