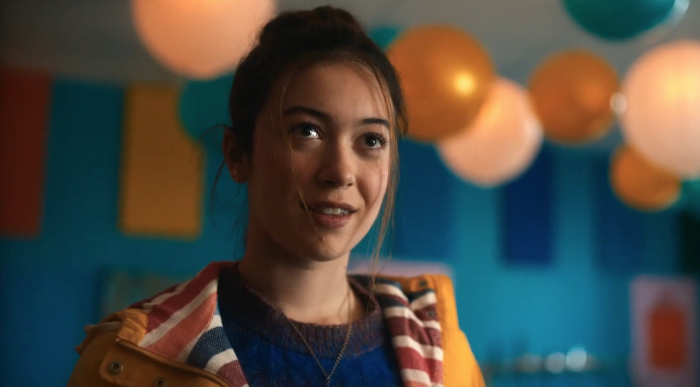 The Y.A. Adaptation 'The Sky Is Everywhere' Is A Lot Of Flower, Not Enough Power

Last I checked I’m not a teenage girl. I’ll admit I haven’t looked in the mirror for a few hours, but I also haven’t made any Big wishes to carnival genies or worn any 1st Century B.C. Abyssinian princess earrings in the course of that time either, so I’m pretty sure I’m still sitting here an entire 44-year-old man as I write this movie review. No matter though, because director Josephine Decker’s adaptation of Jandy Nelson’s beloved 2010 Y.A. novel The Sky is Everywhere did a pretty good job of transporting me to that headspace. Flush with enough Cherbourg-ian color and Gondry-ian whimsy to match the grand hormonal sweep of feeling all of it and all of it way too much, this movie might swing on the side of excess but it swings there fairly honestly, at least.

Not that Decker hasn’t previously proven she knows how to navigate excess. If you’ve seen her ace, emphatically provocational 2018 flick Madeline’s Madeline—which like this new one is also about an artistic teenager (Helena Howard) maneuvering through familial land-mines, embodied most emphatically by Miranda July’s manic iron-wielding mama-bear character—or if you’ve seen her ace but, uhh, emphatically provocational 2020 writer-biopic Shirley—which saw an exceptional Elisabeth Moss caressing every abrasive corner of the author Shirley Jackson—then you’ve already witnessed Decker’s fine form when it comes to fitting explosive personalities under delicate bell jar containers and pressing our faces against the glass. Decker seems to have taken all demands regarding female character “likability” as a dare.

The Sky is Everywhere’s heroine Lennie (Grace Kaufman) is nowhere near the flirts-with-obnoxious level of where those former foci of Decker’s gaze fell. Over the course of one hundred minutes, she’ll flirt with some questionable behavior, and she’ll definitely put off those around her a bit, but her intentions sing with decency that Madeline and Shirley would’ve purposefully mangled just to watch it cry. Maybe that’s because Lennie’s the self-appointed sidekick in her own story, happily tagging along in the wake of her grander, wilder sister Bailey (Havana Rose Liu). Sure Bailey might be pre-deceased when the story begins, but you’d never know it from her still outsized presence in the world. She’s the specter of Hitchcock’s Rebecca turned Manic Pixie, sprinkling glitter into the present from beyond the grave.

Flitting back and forth in time hummingbird-like The Sky is Everywhere gives us glimpses of life for Lennie before Bailey dropped dead from a heart defect while practicing for the school play, and then the sad life after, and… well, save Lennie’s sudden move to center stage in her own existence there’s not a lot that seems too different? A casualty of Decker’s always-go-bigger visual and emotional emphatic-ness is the film’s inability to give us much of a sense of this new true emptiness for Lennie — we see so much of her colorful interior life from the start that we never really see the color that we’re told has been drained by her loss. Early on we do see her unable to play her beloved clarinet, but her actions come at us bestride a parade of musical numbers and pop-art cosplay so lush and grand that no absolute sense of sadness can settle among it all.

Still, even if the film won’t let us feel it, everybody says that they’re broken by Bailey’s death, and the actors do try their best to get that across amid the gorgeous technicolor miasma. Best in show goes to the most practiced thesps of the bunch, with the ever-great Cherry Jones playing Lennie’s slightly-stunned grandma, a hippie-type who lives in her garden and has now lost two generations of girls to the same broken heart syndrome. And to Jason Segal as Lennie’s stoner adopted Uncle Big, who wanders through the movie occasionally to add a real vibe, and does so with enough ease we’re happy every time he does. Best among the younger cast is Pico Alexander of Dickinson, who generates some forbidden sultriness as dead Bailey’s broken-hearted boyfriend who’s always lurking around the yard more than ready to bond with Lennie in their shared grief, with sexy results. (There’s an actual boner sound effect in this movie that never failed to wring a chuckle out of me.)

Yes, boner sound effects. As with all of Decker’s output, there are moments of real purple majesty in The Sky is Everywhere, to be sure. A sequence where Lennie and her more appropriate beau-to-be named Joe (Jacques Colimon) listen to Bach through shared headphones and the rose bushes rise up around them becoming dancers in floral-body-suits rings so sweet and lovely and true and good that you can’t help but swoon. Decker can by now nail these big feelings in her sleep. The ultimate problem for the film is, for all of its important talk about grief and death, it too often averts its eyes from the indecent stuff of it, which is not a problem Decker’s films have encountered before. But this one’s more mellow drama than melodrama, and Everywhere just needed some more ugliness, to be plain about it. Maybe that absence was intentional—when we do get a glimpse of Bailey’s funeral it’s applause, a celebration. And that is spectacular in theory, but it’s never been my own personal experience with grief. And so Everywhere never feels like more than a strained smile to hide its pain.

← All These NFTs Are So Effing Ugly and That's Kind of the Point | The Trailer For Jordan Peele's 'Nope' Is Here, And You Don't Need To Watch The Super Bowl To See It →