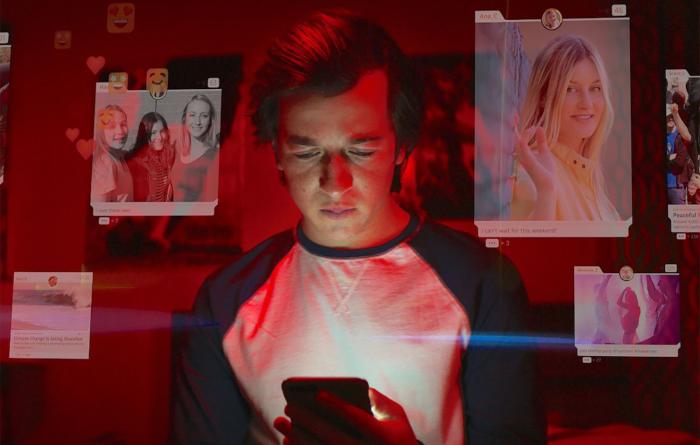 If you’ve ever felt some sort of way about social media or the big tech companies low-key ruling the world at this point, the new Netflix documentary The Social Dilemma, directed by Jeff Orlowski (Chasing Ice) is a decent primer on the subject in terms of laying out key issues and featuring a range of knowledgeable experts. Unfortunately, in terms of storytelling and viewing experience, it’s really not that good a movie.

Technology is not only a staple of modern life that has created, decimated, or utterly reinvented basically every industry there is, but also something that has fundamentally changed the way in which we interact with both the world and each other. In a sense, this is self-evidencing common knowledge, but seeing the consequences of this well-known truth in action—say, seeing a toddler attempt to scroll down on a book page because they’re so used to interacting with screens—can still prove eerily unsettling. While basically everything else we consume that has such a significant influence over us, like food or medicine, is significantly regulated in the name of consumer protection, social media is basically the Wild West.

The Social Dilemma clearly seeks to spark some deeply worrying and crucially important conversations that need to be had around social media, from discussing worrying correlations between social media use and mental health concerns to the commodification of user data. It hits on all the key issues and is worth a watch from an educational perspective but makes the unfortunately common mistake of focusing on its educational aims to the detriment of everything else. This choice ultimately doesn’t do its function as an informational tool any favors either, though.

For a documentary about how tech is hurting humanity, The Social Dilemma is surprisingly neglectful of its own human component. While the interviewees are all solid choices individually, many have incredibly similar relationships with the subject matter—former execs and employees at companies like Pinterest and Twitter who shifted careers as their attitude towards social media evolved—in ways that turn the doc into something underwhelmingly monotonous. It didn’t take long after the training wheels of lower thirds were removed for me to forget who was who among the talking heads because they had such similar things to say and such congruent insights to share. It also makes for a doc that’s heavy on theory but light on anything resembling a story.

Having so much of basically the same also leaves little room for anything else. The Social Dilemma spends a lot of time fretting over Gen Z and the impacts of growing up with social media but makes the regrettable decision to primarily feature The Youth via hokey re-enactments. The film would have been far better off interviewing the young actors they hired to discuss their own thoughts about social media instead of having them act out an embarrassingly contrived storyline about a family trying to reduce their kiddos’ screen time. The one time real people under the age of 25 show up, they’re children of another interviewee and just answer a rather dull question about the amount of time they spend on various apps. One figures the filmmakers would ask them to share an anecdote or something to bring a more engaging story component to the table but NOPE, we just get two teens basically reading their weekly Screen Time reports aloud. Decisions were made here and for the life of me, I can’t figure out why.

The formula of having talking heads describe big-picture trends and then using re-enactments (that aren’t even true re-enactments so much as a drab, utterly fictional companion narrative) to “prove” these points is mind-numbingly dumb. ‘I’m going to demonstrate this real-life trend by showing you this thing I made up’ is a flavor of documentary that feels pointedly pointless. And I haven’t even brought up yet how the re-enactments feature a vaguely Inside Out-flavored device in which nefarious embodiments of social media companies manipulate users’ emotions from the bargain basement version of The Truman Show’s control room.

A glimmer of hope passes by in the distance late in the documentary when it moves on from overviewing everything that’s wrong and discusses ideas for how best to move forward. Several interviewees posit interesting ideas, like potentially beneficial data privacy laws or taxing data collection and processing to “give [companies] a fiscal reason to not acquire every piece of data on the planet,” but instead of exploring these possibilities, The Social Dilemma just speeds through them like it’s doing roll call.

To reiterate: The Social Dilemma is a good primer. If you’re dipping your toes in the water, there’s a good deal of worthwhile stuff here. If most of the information presented here is stuff you already knew, it’s a real slog. Good documentaries are still incredibly watchable even if you already know the information being presented, but The Social Dilemma is a creature of that far less esteemed breed that puts all its eggs in the educational value basket.

← The Oregon Wildfires are the New Normal | Review: 'Unpregnant' Is a Charming Joyride with Important Things to Say →