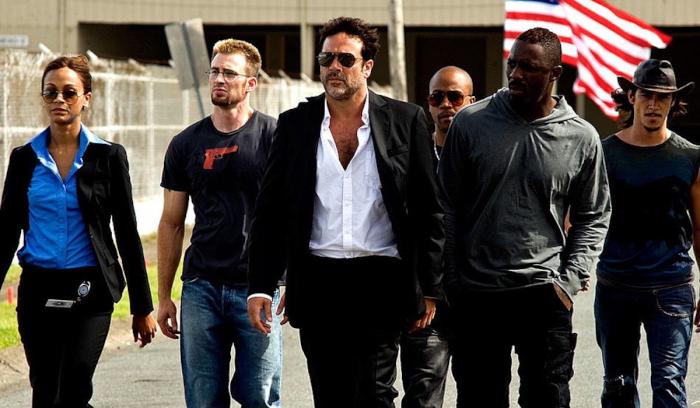 The Losers, the 2010 film starring Idris Elba, Chris Evans, and Jeffrey Dean Morgan (damn, that cast) is currently trending on Netflix, so here’s a throwback to Steven’s original review of the film.

This squad of soldiers is on a suicide mission to get revenge on the man who betrayed them.

The Losers is almost everything an action movie is supposed to be. It’s funny, clever, and realizes that the violence is as much about the dance as it is plot. It has major problems, though, that are infuriating given just how good this could have been.

So, there’s this group of elite soldiers down in Bolivia, led by tumor-ghost-sex himself Jeffrey Dean Morgan. They break orders in order to save some kids, get stabbed in the back by a voice on the radio known only as “Max” and find themselves condemned, presumed dead, and stranded in the middle of nowhere with no cash, no passports, and a need for both revenge and a clearing of their names. Explosions and witty repartee ensue.

First, the problems. [sigh]. The fact that the problems could have been fairly easily fixed is the most frustrating part of the whole thing. There’s not much in the way of the eye roll plot problems that would render the entire movie moot. More just the sort of lazy filmmaking that itches at the part of your brain that insists on thinking. For example, twice the team’s plan revolves around them smashing through a fence in a vehicle, which absorbs all manner of gunfire just in time for them to hop out and shoot everything within half a mile with Olympian level marksmanship, while suddenly their enemies who just pinpoint struck every inch of the vehicle cannot manage to get a bullet within ten feet of the five guys standing next to the vehicle. The second time it happened, as approximately seven thousand rounds of automatic weapons fire struck the vehicle, I thought, ah, the van’s empty and now they’re going to jump out from elsewhere. Nope. Same thing. Michael Weston would have had a way better plan than that.

There are a number of problems in the same vein. There’s the aforementioned cliched and epic ineptitude of enemy marksmanship. There’s the appearance out of thin air of pseudo-magical gizmos like a crossbow that shoots a purple thing that keeps an armored door from opening. When necessary, multiple armed guards will be disarmed by handcuffed good guys simply because they have protagonist membership cards. The plot reasons for going from point A to point B would make more sense if simply mumbled inaudibly.

But for all that, The Losers keeps a grin on its face the entire time, with a sort of manic humor that makes you like it far more than you should. It features consistently entertaining dialogue, quick and fluid banter that just flows throughout the film. It eschews the one-liner in favor of constant interplay between characters about things that have little to do with the plot. Chris Evans, who’s slated to play Captain America, absolutely kills with his comic timing. And Jeffrey Dean Morgan is simply dripping with sardonic sad-eyed charisma.

The best part of the film is the villain, Max, played by Jason Patric. Max is the bad guy I want to be when I grow up. Stealing billions, massacring children, conspiring to start wars, oh he’s sociopathic, but he has a bloody good time doing it. There’s a great exchange between him and a henchman in which Max threatens a terrified scientist and then nods significantly at the henchman. Said henchman proceeds to throw the scientist off the roof.

If you’re going to be evil, you’ve got to feel the fun.

The film is based on an ongoing comic book series, by Vertigo (seriously, I’ve got a couple hundred graphic novels and 2/3 of them are Vertigo, do they publish bad comics?). So there’s plenty more material to draw from and the movie ends more like the season finale of a television series than a stand alone film. It’s clearly built as a setup to seamlessly leap right into more films. If The Losers has a decent opening and makes back its budget, (and really if it doesn’t beat J. Lo’s turkey basting what kind of world do we live in?), then it might get the chance to do that. If the film gets a second entry, they really need to tighten up the sloppiness.

Good? Bad? It’s charismatic and a hell of a lot of fun if you can overlook the issues.


← What Was the First CD You Purchased? | Britney Spears Was Almost Placed on 5150 Hold After Court Testimony →