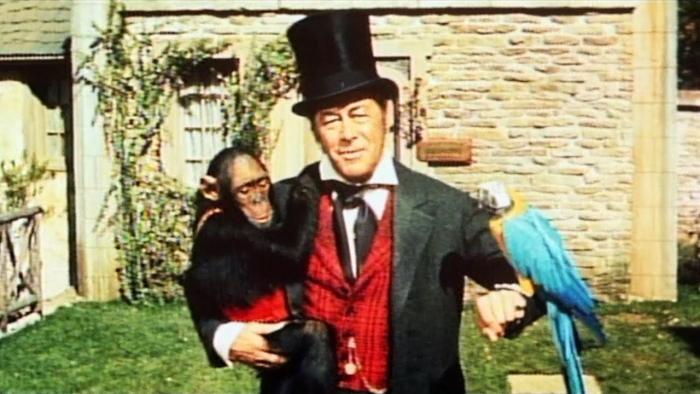 'The Giraffe Stepped On His C**k': The Amazing True Story of the Disastrous Making of 1967's 'Doctor Dolittle'

Robert Downey Jr., one of the most famous actors on the planet, spent many years trying to make his dream project a reality. When you’re Tony Stark and the acclaimed actor star who helped to birth the most financially successful film franchise of all time, you get a lot of wriggle room in a notoriously restrictive industry to fulfill your wildest fantasies. Why would you say no to Iron Man? Unfortunately, RDJ’s dream project was a retelling of the Doctor Dolittle stories, and it turns out that not even Marvel’s finest hero can make a $175 million film with CGI animals and endless fart jokes a hit. As of the writing of this post, Dolittle is projected to make a disappointing $20 - 25 million in its opening weekend, which is certainly not good news for a film with such a gargantuan budget. Reviews have also been scathing, with some declaring it to be the Cats of 2020.

It’s always fascinated me that this was the story that Downey Jr. spent so much of his career resurgence wanting to tell. Its appeal completely eluded me, as did any sort of reasoning behind how such a project could ever hope to be a hit with family audiences in this day and age. The Doctor Dolittle stories, written by Hugh Lofting from 1920 to 1952, were certainly popular in their time but they haven’t endured in the same way that other pieces of classic children’s literature have, such as Peter Pan or the Paddington Bear stories. It doesn’t help that a lot of the Dolittle books are extremely racist and rooted in some very insidious ideas about colonialism and the ‘white man’s burden.’ The Eddie Murphy movies overcame this problem by essentially stripping the stories of everything but the central conceit of a man who could talk to animals, but RDJ seemed more interested in returning to the ‘ripping yarn’ quality of the source material. In that aspect, it seemed to have more in common with that other Doctor Dolittle movie.

1967’s Doctor Dolittle, directed by Richard Fleischer and starring Rex Harrison, is one of the most notorious flops in Hollywood history. The movie that 20th Century Fox was certain would be the family-musical hit of the year turned into one of the most disastrous productions they’ve ever funded, one full of animal deaths, angry townsfolk, wild amounts of racism, an irredeemable prick of a leading man, and millions of dollars’ worth of unsellable merchandise. It’s one of the films that essentially killed off the movie musical in the ’60s and one that all but bribed its way to Oscar glory. Robert Downey Jr. may have gone through some tough stuff getting his Doctor Dolittle made, but at least he got through it without an animal stepping on his genitals.

By the end of the 1960s, the writing was on the wall for the lavish big-budget event movie musical. Audiences’ tastes were changing and the era of Easy Rider was just around the corner. Still, the one-two-three mid-decade knockout success of The Sound of Music, Mary Poppins, and most importantly, My Fair Lady, gave 20th Century Fox the confidence to go forward with their new plan. My Fair Lady had been a very big deal for Warner Bros. The studio paid a then-unprecedented $5 million fee for the film rights, which paid off handsomely when the film made over $72 million, becoming the highest-grossing film of 1964, and won eight Oscars, including Best Picture and Best Actor for Rex Harrison. Fox wanted to recreate that magic, so why not pair up Harrison with some classic children’s stories and let the money roll on in?

Doctor Dolittle was doomed from the start. The studio originally wanted to reunite Harrison with Alan Jay Lerner and Frederick Loewe, the songwriting team behind My Fair Lady who knew how to best work with the fact that Harrison literally could not sing. Unfortunately, Loewe had just retired from writing musicals and Lerner was a notorious procrastinator, so he was fired from the movie after stretching out the process across a year. Instead, the English composer Leslie Bricusse was brought on, in large part thanks to the success of his Broadway musical Stop the World - I Want to Get Off. He would later go on to write the music for Willie Wonka and the Chocolate Factory and two of the best Bond themes. While Bricusse was busy working on his treatment, Harrison decided to be a d**k and exert his power over the production at its earliest stage. For the part of Bumpo, the chieftain of the island that Dolittle is washed ashore on, Sammy Davis Jr. was hired, which Harrison opposed because he did not think that the Rat Pack legend was a real actor. Harrison looked like he was ready to walk, so the producers tried to replace him with Christopher Plummer, a solid 50 years before it happened with Kevin Spacey. Suddenly, Harrison wanted to stay but the producers still had to pay Plummer his full salary. Things were obviously off to a great start, and all before filming even began.

The big hook for Doctor Dolittle was supposed to be its incredible menagerie of live animals, but the producers really had no idea how to handle them. For one, they didn’t know that bringing animals to the UK, where filming took place, would require them to be in quarantine for an extensive period of time, so other animals were hired at considerable expense to ensure they didn’t go over deadlines. They didn’t seem aware that Britain’s weather is notoriously crap, which interfered with shooting and caused many health issues for those poor animals. Much of the film’s location shoots took place in Castle Combe, a scenic Wiltshire village that had zero interest in Hollywood meddling. When the production started meddling with the town, including cutting down TV aerials, the locals revolted and tried to sabotage the film. The legendary explorer Sir Ranulph Fiennes was one of those rebels! This all led the producers to return to California and do very pricey reshoots on a sound stage. The residents of Marigot Bay, Saint Lucia, weren’t any happier about the intrusion of Doctor Dolittle. On top issues with bugs and bad weather — same as it ever was — the locals attacked a large giant snail prop because the island’s children had recently been struck by a gastrointestinal epidemic caused by freshwater snails. All that and the giant snail didn’t even look good in the movie.

The biggest problem for the movie was Rex Harrison himself. A noted bully and a**hole, Harrison was also racist and anti-Semitic as all hell. Everyone hated him. Co-star Anthony Newley was subjected to Anti-Semitic comments from Harrison, who also demanded that Newley’s part be greatly reduced for fear he’d overshadow Harrison. Geoffrey Holder was subjected to racist insults from Harrison’s entourage, and the younger cast members decided to piss off Harrison as much as they could in retaliation against his behavior. Harrison and his wife, Rachel Roberts, were also prone to heavy drinking and chaotic fights. Even the animals hated him, although they did seem to have everyone. They bit and sh*t on the cast and crew. Multiple animals died or fell seriously ill. One squirrel was given some alcohol to help keep them still, but it only knocked them out and caused them to fall off a ledge. As detailed by Mark Harris in his wonderful book Pictures at a Revolution, filming was postponed for three days because, and I quote, ‘the giraffe stepped on his cock.’

Ultimately, the film went three times over its initial budget and took four years to complete. Fox sent the movie to test audiences, who were not happy with what they saw. Even after cutting the movie down to a more ‘reasonable’ 152 minutes, viewers still felt that it was too long and mostly boring. They weren’t wrong. Doctor Dolittle is interminably long and extremely dull. Nobody involved with the production looks like they’re having any fun, the songs are by and large unmemorable, the pacing is insomnia-inducing, and the racial stereotyping is and always was cringe-inducing. For a film that was so expensive that it nearly bankrupted the studio, it looks strangely cheap.

Audiences stayed away in droves, so the producers decided to get some Oscar buzz in the hope that the glow of prestige from the Academy would boost ticket and rental sales. Their campaigning included buying a whole lot of steak and champagne dinners for Academy members and hey, it worked. In a year where the competition included ground-breaking movies like The Graduate and Bonnie & Clyde, Doctor Dolittle received nine Oscar nominations. And you thought all those Joker nominations were bad.

By the end of the decade, the Hollywood musical was basically dead, thanks to films like Doctor Dolittle, Hello, Dolly, and Paint Your Wagon, although Oliver! was a big Oscar winner in 1969, but that movie was British-made. It would take total reinventions of the genre like Bob Fosse’s Cabaret to breathe new life into the movie musical. The Doctor Dolittle stories seemed resigned to the annals of pop culture history, a relic of its time that did not need to be revived. Well, we know how that turned out.

← 'The Good Place' And The Meaning Behind Michael's Fears | Review: Netflix's 'Killer Inside: The Mind of Aaron Hernandez' →