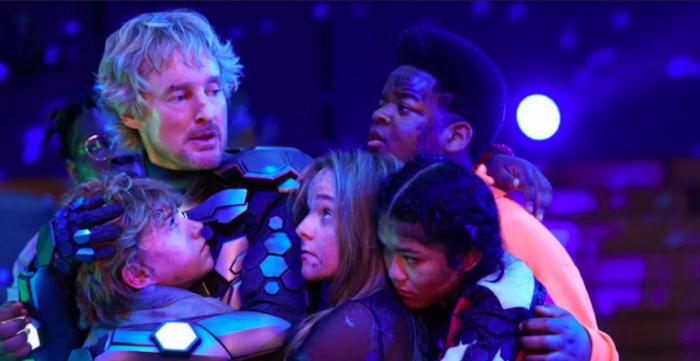 Starting with its flatly descriptive title, Secret Headquarters (now on Paramount+) is a strange beast. Certainly not unpleasantly so! Just seemingly beamed in from another century, or perhaps another timeline altogether. One where movies like this get made at all. From the directing duo of Henry Joost and Ariel Schulman, best known for the original Catfish movie and two Paranormal Activity sequels, it’s basically Spy Kids inverted—a gang of normal, if plucky, kids (“young adults,” they insist) led by Charlie (Walker Scobell, most recently seen deflecting a torrent of Ryan Reynolds smarm in the execrable The Adam Project) uncover his estranged father Jack (Owen Wilson) is really the world’s greatest superhero The Guard when they find the elevator to his “secret headquarters.” Yes, the one in the title. Not much a “Guard” there, Owen Wilson, if a bunch of kids can uncover your hidden lair in between popping pizza rolls.

Unfortunately, the kids’ discovery simultaneously invites a cadre of super-villain wannabes, led by Jesse Williams as a spurned man from Jack’s past (no not like that, unfortunately) and Michael Peña as his financier, a billionaire somewhat hilariously named Ansel Argon who runs a Halliburton-esque security firm that’s found its back-end threatened by the existence of a superhero who’s about to render their business obsolete. (Peña gets called on to do lots of his Ant-Man-esque riffing here, and I am happy to report it is still funny.) And although the movie doesn’t dig into Argon’s diabolical purposes quite enough, that backstory remains a delightful flip on the truly ridiculous concept of “Altruistic Weapons Manufacturers” that we have come to believe possible thanks to one Tony Stark.

You see one fateful day ten years earlier some sort of alien tech fell out of the sky, and two human men came upon it—there was a handsome strapping soldier named Sean Irons (Williams) and there was daffy hippie-esque middle-aged dad Jack. The tech, somewhat sentient, chose Jack as its host, and Irons has been nursing his bitterness over not being The Chosen One ever since. Meanwhile, Jack turned himself into The Guard but in ye olde bargain of all superhero stories lost his family in the process, too busy averting crises on the other side of the globe to make it to Charlie’s every Little League game.

Charlie doesn’t know any of this—he’s just your basic Spielbergian “child of divorce” who can with pinpoint precision time the moment the call will come from his father to cancel their plans. Still he seems pretty well put-together, and Scobell is a helluva charmer—he was in The Adam Project as well but he’s got a much less vapid vehicle for his charms this time around. He’s made for these sort sof things. Truth be told I don’t really know who the audience is for Secret Headquarters anymore, but it is unassuming and good-natured, a perfectly fine family entertainment that I suppose younger kids will enjoy in between new Marvel movies. And it blessedly won’t make their parents want to claw their eyes out.

Beside Scobell’s winning presence, a box of chocolates should be sent to the film’s casting person for giving us a truly likable cast of young actors to surround him—there’s not a bad apple in the bunch. Keith L. Williams (from The Last Man on Earth series) plays Charlie’s best friend Berger (his older brother goes by “Big Mac” and I am sure there is a Good Burger joke happening here that I might get if I had ever watched Good Burger), while Momona Tamada (from The Babysitters Club) plays Maya, the girl who got away but then came back to town coincidentally here on the very day when Charlie’s life goes haywire. (The both of them being non-white almost even out the fact that the villains are all non-white… almost.) Also along for the ride is comic-relief Lizzie (Abby James Witherspoon, niece of Reese and definite inheritor of that determined chin), a self-proclaimed “pretty girl” who loves social media too much and screams a lot, and yet Witherspoon somehow threads that needle to not be annoying? Hercuelean.

Determinedly small in scope despite its blockbuster-adjacency, a hefty chunk of Secret Headquarters, basically its entire middle section, is set squarely in the confines of its titular superhero pad as the kids try to outsmart the baddies. All while that precious piece of alien tech bounces between them like hot potato and the kids figure out how to use absentee-dad’s weaponry stash to their plucky advantage. There are magnet wands and the hi-fi equivalent of that Acme Hole from the Looney Tunes cartoons, all of which are deployed with wit and old-fashioned goofball ingenuity. What can I say, this movie’s not a bad time? All of the adults seem to be enjoying themselves (Wilson in particular seems jazzed to be there, and getting to be a hero for once) and none of the emotional family stuff is ladled on too thick. Perhaps what I am finding so strange about Secret Headquarters, after all, is just its low-key competency—it’s truly family-friendly, of the sort we so rarely see anymore.


← With 'Nope,' Jordan Peele Shows How We Are Killing Showbusiness | 'They/Them' Is Very, Very Far from What It Was Aiming For →