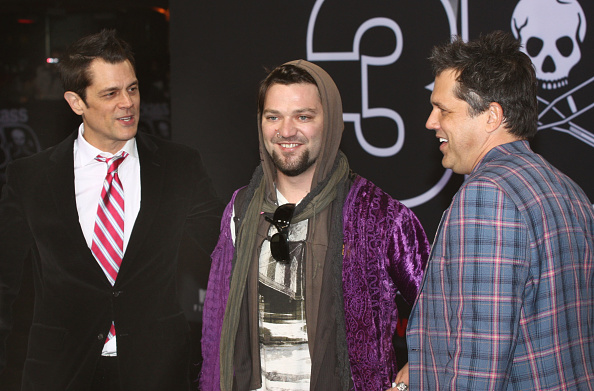 The Bam Margera Situation is a Mess

Believe it or not, there will be a fourth and final Jackass movie, tentatively scheduled for release in October (final because they don’t want to risk any more concussions). This comes despite the fact that the cast is in their forties and fifties while Bam Margera is only 41 but looks as though he’s been pushing a boulder of burdens up a Sisyphean mountain for about 39 of those years. Margera, who has a history of addiction problems, was booted from the film earlier this year because he couldn’t stay sober. He has also since lashed out at the production for reportedly forcing him to go back to rehab, which he described as “torture,” and has made various statements on social media that seem to suggest that addiction is still very much a demon for him.

The cast of the film has mostly remained mum. However, over the last few days, Margera — who is apparently being treated by an addiction specialist in Florida — has again ripped into the cast, more specifically Johnny Knoxville and director Jeff Tremaine, saying that his family “betrayed” him.

“So, my family, Jackass, has betrayed me, abandoned me, rejected me… not all of them, I love all of them and they love me back, but specifically, Jeff Tremaine and Johnny Knoxville. So, I feel like my family has f*cking done everything horrible to me, and made me jump through hoops and walk on eggshells, which is impossible, and strung me along like a f*cking puppet to get the $5 million I usually get when making a movie with them.”

In response, Steve-O broke his silence on the matter with a comment on Margera’s video.

“Bam - the two people you’re saying wronged you (Knoxville and Tremaine) are the same two people who organized the intervention which saved my life. Everyone bent over backwards to get you in the movie, and all you had to do was not get loaded. You’ve continued to get loaded, it’s that sample.”

Director Jeff Tremaine has subsequently filed a restraining order again him, while Johnny Knoxville begrudgingly spoke to the matter in an interview with GQ this week.

“I think each of us was responsible for his own actions,” he said, measured. “And when someone’s struggling, everyone tries to help that person. And at the end of the day, that person has to want help. Sometimes they don’t. Yet.”

I asked him if he was speaking about anyone specifically.

He looked away, visibly emotional. Half a minute passed.

“We want Bam to be happy and healthy and get the help he needs,” he said. “We tried to push that along. I think that’s all I really want to say about it.”

On the bright side, Steve-O has gotten his act together, according to Knoxville. “It was tough when Steve-O was going off the rails,” Knoxville told GQ. “But he has completely, completely turned his life around and is doing just—I mean, he’s doing terrific. He’s a different, different man.”

That’s good to hear, and we obviously wish the best for Bam Margera. We also begrudgingly look very forward to Jackass 4.

← Arrest Warrant Issued for Marilyn Manson in Connection with Assault Charges | Some Things We Missed: 'Hacks' And 'From Cradle To Stage' On Podjiba! →