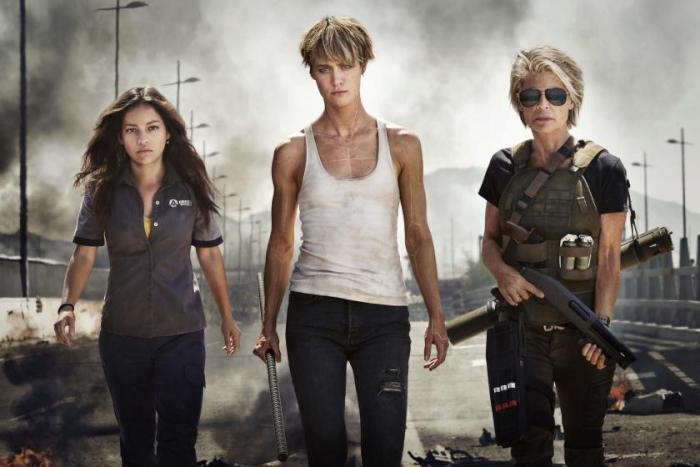 Several things took me aback leading up to — and during — my viewing of Terminator: Dark Fate. The first thing was remembering that this franchise now dates back thirty-five years, and this is the sixth — sixth! entry in the series. That’s hard to believe, in no small part because generally speaking, everything since the James Cameron-directed second entry in 1991, Judgment Day, has been almost completely unmemorable. This led to the next realization — that since Linda Hamilton, Edward Furlong, and Arnold Schwarzenegger blasted their way through that second entry, there’s been a fairly blinding array of star power attached to the films leading up to this one. The cast listing for the third, fourth, and fifth entries reads like Hollywood Mad Libs — Claire Danes, Christian Bale, Nick Stahl, Jason Clarke, Matt Smith, Anton Yelchin, Helena Bonham Carter, JK Simmons, Jai Courtney, Emilia Clarke, Bryce Dallas Howard, Kristanna Loken, Courtney B. Vance and Lee Byung-Hun have all either fought Terminators, been killed by Terminators, or have actually done the terminating. That’s a hell of a list.

Not that it matters much because for the most part, the movies were duds. The last one, Genzyme? Ginuine? Gefilte Fish? Whatever it was called? I barely remembered even seeing it, other than remembering that Emilia Clarke and her dodgy American accent were there. So on the bright side, given the last 28 years’ worth of Terminator movies, there’s really nowhere to go but up. Theoretically, anyway.

The good news is that Dark Fate is better. A lot better, if I’m being fair. It’s inarguably the third-best Terminator film ever made, which for a franchise this big is no small feat. One of the caveats going forward is that the waters have been so damn muddied in the past three decades of films (and we haven’t even talked about the two seasons of the television show) that the universe and timelines of the franchise are a complete damn mess. So right off the bat, Dark Fate does the smart thing: it gives it a soft reboot. It doesn’t change what’s happened as much as it just sort of … ignores it. It never bothers to refer to anything between Judgment Day and now, and that’s a very wise decision. Now, we’re in the present and Judgment Day, the rise of Skynet and its overthrow of the world really, truly has been avoided. We can move on, right? Well, not so much. Instead, the machines find a new way to ascend to the top of the planet’s food chain (a clever enough development that I won’t spoil) and the game is begun anew. The machines have a new savior that needs to be killed on the vine, and the humans have a new protector to send back to take up the fight in the past.

This time, it’s Mackenzie Davis as Grace, a cybernetically “augmented” human soldier, sent back to protect a seemingly innocuous Mexican factory worker named Dani (Natalia Reyes) from a new breed of Terminator, the Rev-9 (Gabriel Luna), who is some sort of frightful combination of the original, skeletal model and the T-1000 played flawlessly by Robert Patrick in the second film. Luna is the first home run for the film, a brilliant combination of implacable murderbot when he needs to be, but also capable of convincingly — and sometimes downright genially — playing a human when he needs a softer approach to get to his murdering. And Davis is equally great as Grace, a superpowered woman with a take-no-shit attitude that’s coupled with compassion. Reyes does a fine enough job as Dani, though she struggles with her heroic speeches, never quite pulling it off. That may well be in part due to her brightness dimming next to the towering, unflappable Grace and their other main compatriot, the steely-eyed, sardonic Sarah fucking Connor.

The return of Linda Hamilton is the film’s real secret weapon because not only does she absolutely kill it as a tired, sad-eyed, shit-talking older Connor, but she has a phenomenal chemistry with the other two women. Hamilton slides right back into the role, updating it with a world-weariness that’s easily convincing, a distrust that’s completely believable, and a confident deadliness that’s undeniably fun to watch. She and Davis easily make up for Reyes’ shortcomings and while we’re here? Let’s talk for a minute about the fact that a damn Terminator film has not one but three women leading it. It feels like a significant moment, and it is, but all the more so because they fit so easily into those leads. The film is well aware of what it’s doing, too, going so far as even having Connor grumble about it being someone else’s turn to be “Mother fucking Mary.” No more is a woman the mother of our salvation … now, she is our salvation, and the franchise is frankly better for it. The three of them are fun and exciting and funny, watching them relentlessly fight back against the ruthless Rev-9 is when the film is at its best. The fight scenes bring back the visceral, high octane brutality of the first two films, and somehow avoid the overwrought yet also somehow dreary boredom of the next three. Director Tim Miller (Deadpool) has a keen eye for action choreography and it is fast and bracing and thoroughly enjoyable, zipping merrily along and even allowing you — at least at first glance — to ignore some middling plotting and clunky dialogue.

But the film is imperfect, and its imperfection comes from the unlikeliest of places. About halfway through, the inevitable return of Arnold Schwarzenegger grinds the fun to a complete halt. As if to try to force us to accept that you can’t have a Terminator film without him, he’s shoehorned into the plot with almost disastrous results. He’s a continuation of the idea formulated in Judgment Day, a robot who has learned — sort of — to feel, and man, is it a clunker of a plot device. It’s not even due to Schwarzenegger’s limited acting range — it’s nearly universally accepted that this is the role he’s best suited to. It’s that the entire arc is simply unnecessary, shoehorned in to preserve the continued link between the actor and the franchise. It’s clumsily written in and it disrupts the flow of the film by suddenly having this unneeded male presence take a central role. It’s all the more frustrating because the pace of the film was flowing just fine without him, and literally could have continued along the exact same route without him too. So, while the front half of the film is breezy actiony goodness with a few bumps in the writing, the back half is a weirdly stumbling, awkwardly staged collection of needless drama and meandering dialogue. Fortunately, for the most part, the action holds up, but all the way to the end one can’t help but think “he didn’t need to be here.”

What are we left with? Well, as I said, even with its warts this is in the top 50% of Terminator films, even if that is damning with faint praise. But it’s enjoyable enough, with some terrific action sequences and a trio of women in the lead who truly do make the endeavor worth watching, and probably even re-watching, which is more than I can say for Rise of the Machines, Salvation and… whatever the hell that other one was called. It’s not even worth looking up. If they can find a way to integrate the old with the new more seamlessly, and continue the path that Dark Fate has set them on, the filmmakers might actually be on to something other than just milking the same sad cow for whatever last few dollars it has left. Dark Fate stumbles a good bit, but it shows promise of perhaps leading the franchise into a brighter future.