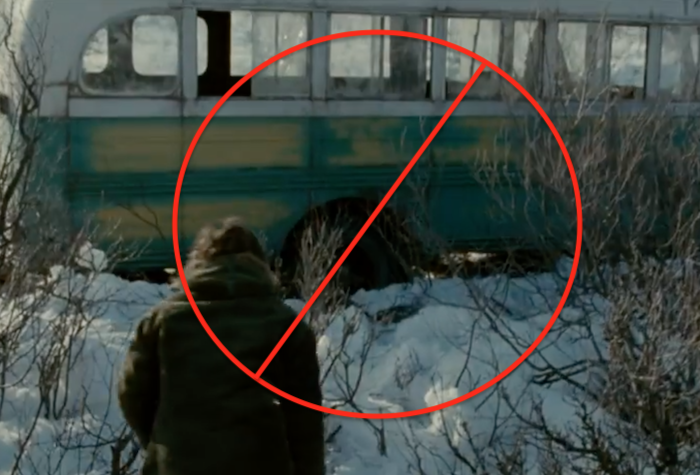 Stop Emulating 'Into the Wild' Nature Will F*cking Kill You

Friends, for those of you who don’t know my background, I am not, contrary to popular opinion, a centuries-old fae sent here to parlay the dangers of mole people and sing the praises of Con Air. No, but I could see how you might think that. I am but a simple woman, who grew up on a mountain outside of Anchorage, Alaska, where I lived until I was 21 and finally got the hell out of there because as it turns out, I did not enjoy harsh winters, isolation, and the lack of Targets (which I understand has since been remedied.)

So, I come to you today as an Alaskan, who was raised with the knowledge of what to do when (not if) a bear or a moose charges you. What berries taste like watermelons, which ones are cranberries, and which ones will kill you (look for the black dot at the bottom of berry.) How never to venture out on the beaches outside of Anchorage because the tide comes in quickly and the mud sucks you down so you can’t escape. What the first signs of frost bite are, and how to dress (always in layers!!!) to prevent losing your appendages. Who was raised with the innate knowledge, which apparently is not universal, that nature is indifferent to our survival, it will kill you and not care.

It is with that background that I beg, nay, plead on the following grounds: stop emulating Into the Wild. It is a sad, entirely preventable story of one person’s inability to grasp what children in Alaska are taught early, and he died as a result of his actions. It is not a romantic, anti-hero story that should be emulated, and its sites within Alaska should not be places for pilgrimages.

To some of you, this may seem obvious, but it is not obvious to many people, which is why five Italian tourists just had to be rescued from a trek to the Into the Wild bus, which by the by, is in the middle of f*cking nowhere, which they decided to go visit in f*cking FEBRUARY of all months. FEBRUARY! You know what the average temperature in that area is for this time of year?! I’ll tell you, the average high is 17F and the average low is -2F. Friends, living in LA, my blood has thinned considerably since I left Alaska in 2006 but I can tell you this—there is a demonstrable difference between 0F and -10F which I dumbly could tell because I used to let my dog in and out of the house wearing shorts in that kind of weather. The cold feels like it is literally stabbing your skin all over—and if you’ve never experienced that kind of cold before, you will not understand what I mean. Side note—Alaskans are kind of crazy and once it starts to hit 40F you’ll see people out in shorts and a t-shirt because after you braved -10F in the winter, 40F feels downright balmy. Also, I was very dumb to wear so little layers to let my dog out, but I always had a warm house to walk right back into—people who visit the Magic Bus do not.

I have a working theory which I am going to present to you as fact now, because I am a person on the internet after all. It’s this—if you did not grow up in a place where nature is wild and untamed, you do not grow up with an inherent understanding that you can die, at any moment, and nature will not flinch. It’s why I believe some people do incredibly stupid shit like this, right here:

There is no fucking way. pic.twitter.com/LH1uigI5QE

Or why tourists with little-to-no training decide to climb Mount Everest on a whim. It also explains why I saw so many damn people climbing over the railings at the Grand Canyon National Park to get a damn selfie. What the f*ck, people!!!

If you grow up in a city, or a town, where you don’t have to worry about moose darting out in front of you at any given moment (which can be equally deadly whether you’re on foot, or in a car) and emergency services are just a few minutes away, it desensitizes you to the reality that those circumstances are not the norm everywhere. It gives you a false sense of security that humanity has beaten nature into submission. As someone who grew up in Alaska, even typing that sentence out just now made me feel weird, because I cannot fathom an approach to the world that wouldn’t factor in all the ways you could die, at any given moment, because you didn’t pay proper respect to your surroundings.

Friends. The Into the Wild Bus is not 5 minutes off the beaten path, near a major metropolitan area (btw—there is only one metropolitan area that could even be close to being considered “major” and that’s Anchorage with its population of less than 300,000 people.) It is in the middle of f*cking nowhere, in the interior of Alaska, where -40 F isn’t that big of a deal. Let’s also acknowledge that Christopher McCandless f*cking died out there—it should not be a kicky tourist destination to prove something to yourself. It should be off-limits to everyone but the most experienced outdoorspeople and even then—why do you need to go to a bus where someone died?

There is a certain type of person who is drawn to Alaska, which other Alaskans know well. They are the McCandlesses of the world—wanting a true, authentic wilderness experience, who think that the people who live in Alaska have gotten soft because they choose to live in society, with running heat and water and a well-built shelter to house them. They will rant at you about how we’ve gotten too far away from nature. How they, and they alone, know how to get back to society’s true roots. They are almost never, ever from Alaska. Most of the time, after one encounter with true nature, they will see that wisdom of the “soft” Alaskans, because the reality of the situation is this—there is a good f*cking reason why people banded together, and built homes together. Alaska is feral, unforgiving, and brutal—you need other people around you to help keep you safe, and who can help you out if you get into a jam, and can tell you which plants you can and can’t eat and who know that sometimes you have to eat blubber mixed with berries just to stay alive if you’re out there, away from home.

Christopher McCandless is not a romantic hero. There is nothing noble about his desire to live off the grid in Alaska, especially because he opted into this lifestyle without the skills to be successful at it. Furthermore, there is an irony here about how the bus where his body was found, emaciated and alone, is now a tourist destination for other woefully unprepared people with no understanding of the indifference of nature, to come to, and need to be rescued from—and that’s the kicker, here. Every time someone ventures out into the wild, because we do live in a society, someone else has signed up for the unfortunate but essential task to go look for them when the inevitable happens.

So, I will say this again—for the love of all that is good and holy, stop f*cking emulating Into the Wild. It is dangerous, stupid, and it puts other people, not just you, at risk. If you want the real, authentic Alaskan experience then you go to Moose’s Tooth pizza like a goddamned normal person, and then go whoop it up at one of the many bars downtown, and maybe end your night at the Village Inn on Northern Lights. (OK, that’s just the 21-year-old Kate Hudson Alaskan experience upon further inspection…) Just stay out of the damn wilderness.