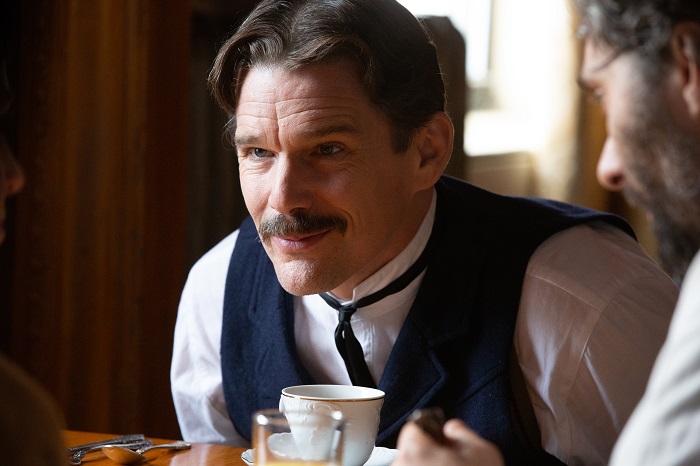 Spoilers: On the Dizzying, Electrifying Weirdness of That Musical Moment in ‘Tesla’

Tesla is a perfect “your mileage may vary” movie. The defenders of Michael Almereyda’s latest are passionate: Bilge Ebiri at Vulture called it “bizarre” and “bewitching,” and writing for Crooked Marquee, our very own Kristy Puchko called it “bold” and “brilliant.”

I admire both Bilge and Kristy very much, and I love how much they loved this movie! I wasn’t quite on its wavelength (you can read my Pajiba review here), but there is one scene I adore so much that it almost redeemed the entire movie for me. You might think that’s hyperbole, but seriously! It has wormed its way into my brain! Let’s talk about it! 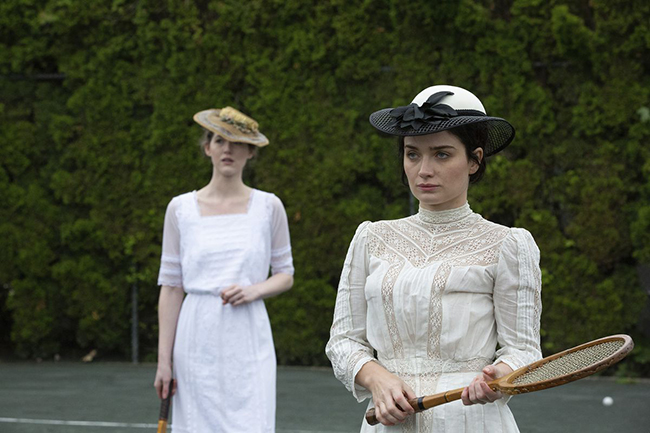 Tesla indulges early and often in breaking the fourth wall: Anne Morgan (Eve Hewson), J. P. Morgan’s daughter who develops romantic feelings for the aloof inventor played by Ethan Hawke, is direct in her interactions with us. She uses a laptop, she references Google Images, she talks about the legacy left by men like Tesla and Thomas Edison and George Westinghouse. She is both stationed within the film and floating outside of it, taking our hand and guiding us through it, and she is only one of Almereyda’s experiments with form.

The filmmaker’s approach here, more than anything else, is playful in how it considers what stories become legend and how they calcify as such, vs. what facts are dismissed as improbable and are hence lost to history. So many of Tesla’s ideas, during his time, were thrown aside because no one could figure out how they could make money. Anne’s father J. P., after giving Tesla the equivalent of $4 million in today’s dollars, is infuriated when his investment doesn’t pay off. Tesla wants to connect the world, but he can’t figure out how to financially capitalize upon it—or rather, that was never his priority at all. 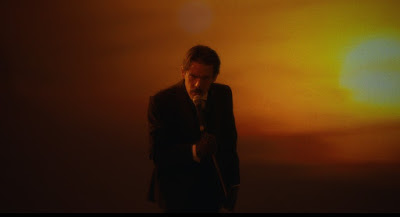 Tesla rarely speaks, and so much of our understanding of the man has to be filled in by our own imaginations as we watch Tesla flee to Colorado, where he can conduct his mysterious experiments without curious eyes, or by Anne, who shares details of how Tesla burned through money building devices that barely anyone else could understand. He was always not just one, but many steps ahead of everyone else in understanding the ways energy and electricity moved through our world, but also more than a few steps behind the titans of industry who wanted to monopolize his findings. To make that distinction, and that tension, quite clear, Tesla uses a very recognizable pop culture trope: the karaoke scene. It is totally unexpected, and it is wonderful.

Over the years, karaoke scenes have served as a sort of character-development shorthand in film and TV, a way for people to spill their souls without having to find their own words. They can borrow someone else’s, and add a layer of emotional truth upon it by performing—whether in front of strangers, like Lost in Translation or 10 Things I Hate About You, or loved ones, like in Gilmore Girls or Superbad, or an implied-yet-absent audience, like in Tesla. In the latter, that audience is us, and Hawke’s Tesla, clad in his tidy suit and hands covered in leather gloves, is crooning directly into our faces, barely breaking eye contact. Like in the best karaoke venues, the background cycles through a menagerie of backdrops, from a sun setting in a creamsicle orange sky to an onslaught of clouds, fluffy white against cerulean blue. And the choice of song here is so perfect that I excitedly clapped when the first notes started playing: Tears for Fears’s “Everybody Wants to Rule the World.”

Here, experience it for yourself:

The greatness of this moment is not only in how it collapses the fourth wall, like Anne’s narration, but also in the song choice itself, which thematically alludes to so many of the questions swirling around Tesla. “Everybody Wants to Rule the World” has been a classic for a long time—used in all kinds of film and TV, from Romy and Michele’s High School Reunion to Donnie Darko to Ugly Betty and Mr. Robot …

… and that excellent, declaratively ominous cover by Lorde, which was used in The Hunger Games: Catching Fire soundtrack …

So the song has accumulated a legacy of its own over time—ahem, just like Tesla—and the lyrics appropriately mirror the ways in which Tesla himself feels trapped. Galvanized by his own vision for a different world, one in which he is the first person to communicate with Mars, and one in which he can harness electricity to travel around the globe, and one in which he imagines instant message-sending between the United States and various far-flung locations. All those things would come to pass, and many of Tesla’s patents have been used to shape our current reality, but those dreams were ridiculed at the time. And so:

Everybody wants to rule the world. Edison wanted to rule it; he threw Tesla under the bus, mocked his alternating-current theory—which turned out to be right—and then wasted $4 million of his own money on a mining concern that fizzled out. Westinghouse wanted to rule it; he paid Tesla a small sum, comparatively, for an array of patents that allowed Westinghouse to become even richer than he already was. Morgan wanted to rule it; he turned his back on Tesla when he couldn’t figure out how to monetize his grand plans. And so Tesla did his best to disappear into his work, traveling to Colorado to build his Tesla Experimental Station and then later returning to New York to create the Wardenclyffe Tower. In Tesla, we see the man in the pitch-black Experimental Station, waiting at the base of what is essentially a gigantic plasma lamp, waiting for the electricity to strike at the right moment. Sounds a little bit like this:

There’s a room where the light won’t find you
Holding hands while the walls come tumbling down
When they do, I’ll be right behind you
So glad we’ve almost made it
So sad they had to fade it
Everybody wants to rule the world

And how Tesla butts heads with his wary investors, and with myriad doubters? Well …

During this karaoke scene—which comes in the final few minutes of the film—we also see clips of other important preceding moments, both real and imagined: that ice cream cone argument with Kyle MacLachlan’s Edison; the botched execution of William Kemmler (Blake DeLong), organized by Edison as a way to smear Tesla; the attempted seduction of Tesla by French actress Sarah Bernhardt (Rebecca Dayan). Tesla’s singular performance becomes an opportunity to revisit these other moments of artifice, and for Anne to appear and drive home what is essentially Almereyda’s mission statement: that “images, impressions, and feelings” are what shape how we view ourselves and how others view us.

Notice how none of those three things is “facts” or “truths”; those are too deterministic. Instead, Tesla is devoted to affect, to showing us the way that Tesla fascinated and perturbed and befuddled so many while ultimately remaining a mystery. “Nothing ever lasts forever” is one of the recurring and final lines of “Everybody Wants to Rule the World,” and Tesla, quite painfully, knew that to be true: He died alone in New York in 1943. “Destitute, but not forgotten,” Anne says in Tesla, and if we were to recognize who gets to “rule” the world as the person who put forth the most ideas that changed reality as we know it, Tesla might every well have earned that supremacy. Capitalism doesn’t work like that—it isn’t fueled by dreams of innovation for innovation’s sake, with no cost attached; do not let any tech bro tell you otherwise—but the fantasy world of cinema? The fantasy world of cinema can do whatever it wants, karaoke and all.

Tesla is playing in theaters, is available on video on demand, and is available for digital rental or purchase through Amazon Prime, Vudu, and other services.

← A Brief Explainer on OnlyFans and Why Celebrities Joining It May Be A Bad Thing | 'Cobra Kai,' Now on Netflix, Is So Much More than a Gimmick →