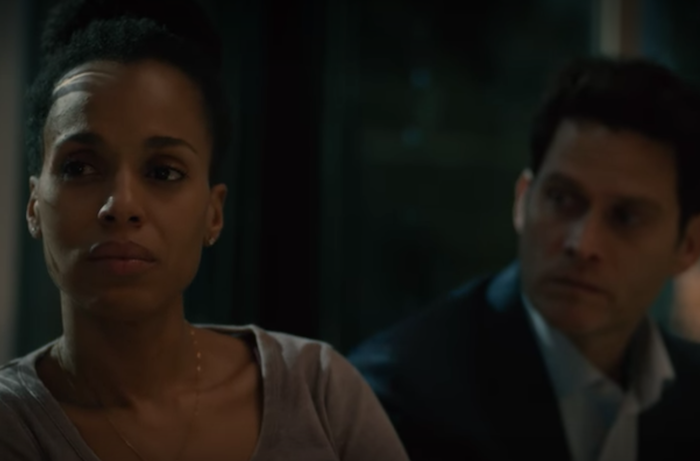 Spoilers: Is the Ending of 'American Son' Starring Kerry Washington Based on a True Story?

American Son, the Netflix original movie starting Kerry Washington and based on the play of the same name, deals with extremely heavy subject matter. The entirety of the film takes place in a waiting room of the Miami police department, in the early hours, where newly-separated parents Kendra (Kerry Washington) and Scott (Steven Pasquale) are waiting to hear back about the status of their 18-year old son, Jamal, after being alerted that the car he drives was involved in a police incident earlier that night. Unable to get any answers as to where Jamal is, and why he was involved with the police, the next hour and a half unfolds in real-time, slowly and painfully with frank discussions of race, police brutality, and what it’s like to be (and raise) a black man in America.

Unfortunately, this movie does not have a happy ending—after the events of the night are slowly trickled out in bits of unverified information, including a grainy video on social media that shows an officer shooting his gun at a group of young black men that could include Jamal, it’s ultimately revealed at the end of the movie that Jamal had been dead the entire time. The car he drives (but was not driving at the time) was pulled over after one of the three occupants, Jamal’s friend, was observed buying a small amount of cannabis. The driver, who was not Jamal, had an outstanding warrant, and while the police officer was trying to determine his course of action, all three young men stepped out of the car. Jamal put his hands on the hood of the car to await further instruction from the officer. While he did this, one of his friends decided to try to run away, and the officer opened fire on him. Jamal was shot in the head, either through a ricochet bullet or a stray shot, and was instantly killed. The film ends with his parents finding this out and becoming inconsolable in their grief.

While the film is not based on one true story, necessarily, it certainly feels familiar. Being shot by the police is a leading cause of death for black men, according to The LA Times. Jamal met the same fate as the 1 in 1,000 real black men, teenagers, and children, did. People like Eric Garner, Tamir Rice, Freddie Gray, Michael Brown, Philando Castile, and countless others whose names we’re not privileged to know, due to police violence.

American Son is available to stream on Netflix.