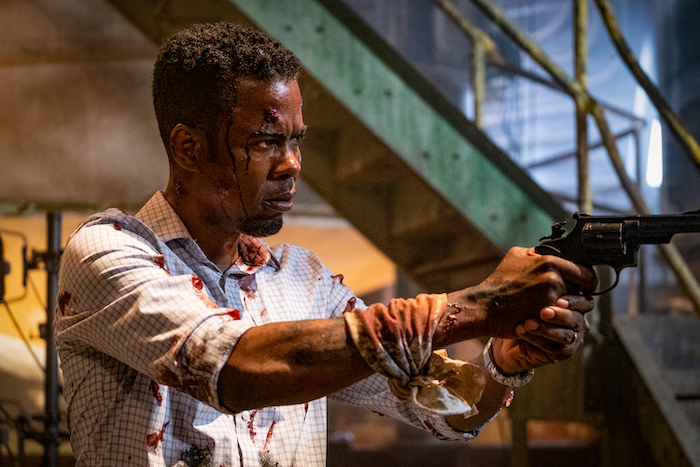 'Spiral' Review: Everyone Sucks Here, But Not in a Fun Way

The ninth installment of the Saw film series and the fourth directed by Darren Lynn Bousman, Spiral: From the Book of Saw comes across as an attempt to revamp the franchise that chips away at its fundamental appeal without bringing anything new to the table.

Chris Rock stars at Zeke Banks, a tired rehash of the tired, jaded cop archetype. He’s not a team player, partly because he’s vaguely antisocial, partly because he turned in his crooked partner 12 years previously and his colleagues never forgave him for it (because, ACAB). Part of the chip on his shoulder seems to be that he’s a legacy cop in the shadow of his father, Marcus, a former chief of police (Samuel L. Jackson), but this particular dysfunctional father/son dynamic is so poorly explored it’s almost impossible to critique.

Anyway, since Spiral goes the most cliche route without fail. First, Zeke gets assigned a new partner against his will, perky newbie Wiliam Schenk (Max Minghella), and just in time for a Jigsaw copycat targeting crooked cops (because, ACAB) to waltz onto the scene. We are told this is a major pivot because the OG Jigsaw killer didn’t target cops for abusing their power. This is 100 percent untrue. Why does the film say this, then? I do not know. I do not know why this film makes most of the choices it makes.

Spiral is a fitting title, because time is a flat circle, and we’re all stuck here in this eternal cycle of the same few dozen crusty old tropes forever. Perhaps it’s a conscious effort to channel the non-energy of a burnt-out detective, but what Chris Rock does here instead is a burnt-out performance. “You can have my body but not my soul, I’m here for the paycheck,” his dead-eyed, occasionally vaguely constipated gaze seems to say. Apparently, he is a huge fan of the Saw franchise, but based on his performance here you would really never guess.

In an otherwise generic opening scene, Rock does show off a glimmer of his impish comedic brilliance in a delightfully random riff about Forrest Gump before the film fully descends into a bleak, trash-strewn ocean of darkness. (There’s one more lame attempt at humor of the “ha-ha women suck” variety but let’s not get into it.) Anyway, this glimmer of levity also starkly points out exactly what Spiral is most desperately missing: joy.

The genre-defining Hollywood horrors of the 1930s are campy as hell. The 1931 Dracula features a cameo from a vampire bee. The Invisible Man runs around (invisibly) naked and spanks a cop. Then, of course, there’s The Bride of Frankenstein. This is a key element of horror’s appeal. A series doesn’t make it to a ninth installment if no one is having a good time along the way, and if the first Saw was as joyless as Spiral, there would never have been a second. Sure, there’s the particular subgroup of horror films that take themselves super seriously and like to say they’re “elevated” or whatnot, but overall the horror genre has always been about being an enjoyable, even visceral experience, without needing to stress over things like “good taste.”

Spiral clearly isn’t worried about good taste, it lumbers into a rushed finale that feels surgically engineered to push buttons. And by surgical, I mean the sort of surgery that ends in a malpractice suit because this thing died on the table even if they’re still putting the rotting corpse in theaters anyway. Yet the lack of good taste really isn’t the problem so much as the way it forgets to have a good time in the process.

There is no less enjoyable combination than that of dumb and heavy, and that’s Spiral in a nutshell. It is a generic, joyless pile of cliches, and perhaps its sole unique feature is the rather remarkable way in which it is not just full of holes but goes out of its way to point out the existence plot holes just before diving right into them. The second act features Banks stating his intent to make a phone call, a phone call which would have rendered the third act and final plot twist impossible. So, presumably, he does not make this phone call. But why not? Why even bring up this phone call? Why point it out? I DON’T KNOW.

Again, though, it is not the dumbness that kills Spiral, but the way it totally forgets to have a good time in the process. There is not a single likable or even entertaining character in this whole movie. The cops range from incompetent to godawful, the killer is annoying and gives one of the most lackluster villain speeches I have ever heard. The only thing there is to root for is the end credits, and that they appear sooner rather than later.

Spiral is now in theaters.


← Review: Suspense-Free Thriller 'The Woman in the Window' Tries to Turn a Trashy Pot-Boiler into a Glossy Prestige Drama | ABC Announces a Slew of Renewals and Cancelations →