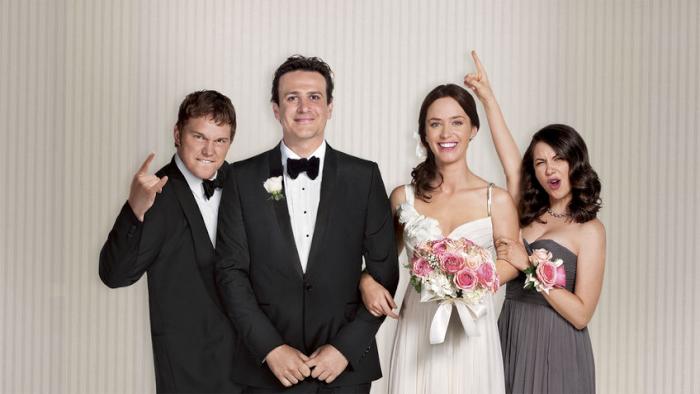 (spoilers for The Five-Year Engagement)

Few things in life go the way we plan. Seemingly straight paths turn into circuitous routes featuring delays and unexpected side trips. The goal may or may not change along the way. Director Nicholas Stoller demonstrates this in his 2012 film The Five-Year Engagement, featuring a pair of lovebirds who seem to have fate operating against them at every turn.

Tom (Jason Segel) sweetly and nervously asks his girlfriend of one year, Violet (Emily Blunt, at her most charming), to marry him. Sitting at a private rooftop table at the chic restaurant Tom works at—complete with an amazing view of the Golden Gate bridge—everything feels perfect. That is, of course, until Tom’s irate head chef and boss (Lauren Weedman) interrupts the moment by verbally accosting him for calling in. Later, Violet and Tom go on to have their engagement party. Among the invitees are Violet’s sister Suzie (Alison Brie, in what is one of her funniest film roles to date) and Tom’s co-worker and ignoramus best friend Alex (played by Chris Pratt, in the midst of his Parks and Rec tenure). This blows up spectacularly in Tom and Violet’s faces when, in the midst of their wedding planning, a contrite Suzie tearfully confesses to Violet that she’s now pregnant after hooking up with Alex the night of the engagement party. Tom and Violet now find themselves attending their shotgun wedding instead, with barely masked resentment. Their already-delayed nuptials wind up even more so when Violet, a psych Ph.D. on the tortuous academic job market, gets an offer for a two-year post-doc position at the University of Michigan. Determined to help Violet fulfill her dreams, Tom quits his promising job at the restaurant so the two can pick up and move. Things go downhill from there.

While the focus is on the central couple who are trying everything they can—even when they shouldn’t—to make things work, Suzie and Alex’s relationship is completely improvised. Yet Alex, knucklehead that he is, manages a sincere moment of romantic earnestness when he sings to an enraptured Suzie at their wedding:

Not even Tom and Violet can help but get teary-eyed at the moment. Even if you don’t know Spanish, the emotions transcend the language. Titled “Cucurrucucú Paloma” (“paloma” is “dove” in Spanish, while “cucurrucucú” refers to its cooing sounds) it’s become a standard throughout Latin America. The lyrics relay the story of a lovesick man whose soul returns in the form of a dove making its signature cry:

Originally written in 1954 by Mexican composer Tomás Mendez, who has a number of songs to his credit—among them, “Paloma Negra,” which is one of my favorites for when I need to cathartically scream-sing in the car—but none have blown up quite like “Cucurrucucú Paloma.” Made famous by Mexican superstar actor and singer Pedro Infante in the 1955 film Escuela de vagabundos (School for Tramps), it has become a beloved classic that has been covered dozens upon dozens of times. One of the most treasured versions is by acclaimed Mexican singer Lola Beltrán, whose rendition is so revered that the thousands of people who attended her funeral sang it in unison as a goodbye:

The song had a semi-recent resurgence, thanks to director Pedro Almodovar who used it in his 2002 film Habla con ella (Talk to Her). Sung by Brazilian singer Caetano Veloso, this is a very different rendition. While Beltran, accompanied by a mariachi band, brings the drama, Veloso’s pared-down version is filled with sheer longing. Tremulous and intimate, he sounds like a man singing from the bottom of his grave, filling the air with one last song before the earth is shoveled over him:

Nearly a decade later, director Nicholas Stoller would not only remember this scene with this spectacular song, he would also (in a marvelous display of serendipity) find himself shooting The Five-Year Engagement with the very same cinematographer, Javier Aguirresarobe, responsible for filming that now-iconic Veloso performance in Talk to Her. Inspired, Stoller threw out the original scripted wedding scene and reshot it with Pratt singing instead.

While The Five-Year Engagement is comedically successful, Stoller’s instinct to build the film’s core around love is what makes it work. But with the sweet comes the bitter. When Violet’s boss, psych professor and overall academic fuckboy Winton (played by Rhys Ifans with stomach-churning accuracy) gets the funding necessary to extend Violet’s position, she has to inform Tom that they will have to stay in Michigan, a place he has grown to hate bitterly, for longer than originally expected. Unsurprisingly, this results in a fight later that night. But as the two lie in bed together, now at an impasse, Tom expresses a sentiment that isn’t unfamiliar to those who have weathered difficult times with the person they love most:

Tom: “You know what? This is all very confusing, and I’m clearly overwhelmed. And I’ve got to be honest, I think the best thing would be for me to just be alone right now so that I can think.”
Violet [rising out of bed]: “OK. I’ll just give you some time then, shall I?”
Tom: “Well, don’t go. I mean, I need…I need you here.”
Violet: “What do you mean? You just told me you needed time alone. What do you want? I don’t know what you want.”
Tom: “I don’t want you to go. I just want to be alone with you here.”

Admittedly, the film is overly long, brought down mostly by its saggy second act, but it’s still a more than worthy entry into the rom-com ranks. And it does so by taking the stance that love isn’t effortless grace, that sometimes it’s a choice made daily. When Tom’s parents (Mimi Kennedy and David Paymor) come to visit, his mother proceeds to chew him out for letting Violet go and allowing himself to settle with the pretty but considerably younger Audrey (played by a then-unknown Dakota Johnson, who is a delightful monster here). Tom attempts to squelch the discussion but it doesn’t work:

Many couples, if allowed the room for honesty, would probably admit there’s times when they wonder if this person is really it. If the issues can be dealt with, if it’s even worth the trouble. And then you AND your partner remind yourself why this is your favorite person, a cycle that continues on throughout the relationship (however long it may end up being).

In what is arguably the funniest scene in the film, Violet visits Suzie and the conversation turns towards her recent reunion with Tom. Suzie’s daughter, who up until now has been quietly playing next to them, demands that the two speak using the voices of Elmo and Cookie Monster. They oblige, though the conversation continues. Frustrated, Violet (now Cookie Monster) finally gets to the heart of her primary concern:

Suzie: “Elmo is very happy with Elmo’s little Elmos, okay? Elmo would just like a break! Every once in a while! Elmo never gets a break!”
Violet: “Fine! This is fine! But this is precisely why Cookie wants to take the time to consider if he’s picked the right cookie for his life!”
Suzie: “Well maybe Elmo thinks there is no right cookie, you just pick one up and take a bite!”

While there’s no perfection in love, it’s not about settling either. It’s about having faith. Whether it comes fast, or takes its sweet time—or doesn’t happen at all, which can also make for a happily satisfied life—even the most inspiring examples of it still involve constant personal interrogation. Violet and Tom make the active choice to choose one another, which is why the wedding, when it finally happens, feels so earned. You watch them love and struggle, only to come back again, much better prepared this time around. The two know this, and Tom put his intentions in no uncertain terms:

Violet, smiling in her wedding dress: “You better get down there” [gestures at the wedding party at the bottom of the hill]
Tom: “You must be out of your mind. I’m never letting go of this hand again.”

A fascinating look at the use of Veloso’s “Cucurrucucú Paloma” in Barry Jenkins’ Moonlight.

Another dove song, here’s Chavela Vargas singing the hell out of “Paloma Negra.”

Kaleena Rivera is a librarian and writer. When she’s not reenacting the Cookie Monster/Elmo fight scene from this film, she can be found on Twitter here.

← Review and Interview: Darius Marder on 'Sound of Metal,' and Why Riz Ahmed Deserves an Oscar Nomination | In Defense Of Harper, The Apparent Monster of 'Happiest Season' →