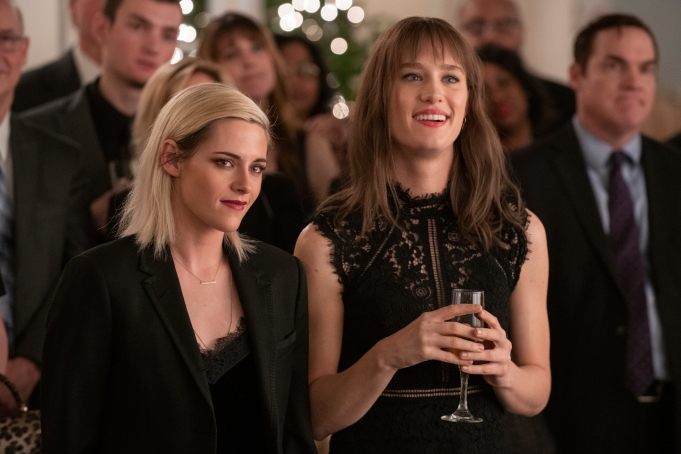 In Defense Of Harper, The Apparent Monster of ‘Happiest Season’

Right out the gate of its Thanksgiving release, Clea DuVall’s lesbian holiday rom-com Happiest Season smashed a bunch of Hulu viewing records. While pitiable conservatives moaned their outdated ideas of “Family Values,” real families were flocking to the streamer for the very first time to watch Mackenzie Davis and Kristen Stewart play Harper and Abby. The Pittsburgh pair are a lovey-dovey couple who go home for the holidays only to find out that one of them, the Harper half, hasn’t been exactly totally honest about her whole “Coming Out” experience. In fact, she hasn’t come out to her conservative small-town family at all.

With great success comes great—sometimes too great—expectations. So, the polycephalic beast known as Social Media has spent a hefty chunk the past several days having none of it. The online masses froth and foam that Harper is a monster. She is a nightmare creature risen from the depths of the khaki-clad 1990s, back when people were still closeted (because Coming Out is apparently no longer A Thing). To them, her actions are so incomprehensible and ghastly that she might be as well be speaking in devil tongues. Did anybody check under that brown wig of hers for horns? If Mackenzie Davis wasn’t so dang tall we could probably see them outright!

Harper’s sin is not only running back into the closet but also begging Abby to join her and play the “roommate” for their holiday visit. As Abby struggles with this big ask, she leans on her best friend John (Schitt’s Creek’s Dan Levy), for advice. When things seem their most dire for Happiest Season’s couple, it’s John who comes to the rescue, giving a beautifully delivered and tear-jerking speech to set us and Abby straight (so to speak). It’s The Speech of the film. It’s the moment you can single out as the film triple-underlining its thesis, its reason for being made.

Here’s what Levy’s character says about the experience of coming out:

“Everybody’s story is different. There’s your version and my version and everything in between. But the one thing that all of those stories have in common is that moment right before you say those words when your heart is racing and you don’t know what’s coming next. That moment’s really terrifying. And then once you say those words, you can’t unsay them. A chapter has ended and a new one’s begun, and you have to be ready for that. You can’t do it for anyone else. Just because Harper isn’t ready, it doesn’t mean she never will be and it doesn’t mean she doesn’t love you.”

See, this entire film exists in Harper’s “moment right before.” It’s terrifying. Giving this speech to Levy, who just finished up five seasons of spectacularly generous and humane (and queer!) comedy with Schitt’s Creek, is DuVall’s ace. This scene does a lot of the emotional heavy lifting. And who the hell can argue with Dan Levy when he gets a little tear in the corner of his eye? Do you want to hurt Catherine O’Hara’s feelings or something? Nobody wants to hurt Catherine O’Hara’s feelings.

Yet many viewers seemed to overlook this crucial scene in their criticisms of Harper and Happiest Season. Where was the space for Harper’s imperfections? The generosity to allow for her very real fears? I typically cringe at this word, but where was the acknowledgment of her journey, one many that queer people, like myself, have had to reckon with?

Despite Harper’s many hugely crappy decisions—all her hemming and hawing, right on up to and including her outright denial of her gayness when unkindly outed by her sister—I personally found myself feeling her pain. I know only too well how “out” we are in our lives can become raggedly compartmentalized, without even ever intending it. Sometimes it just sort of… happens. And it can quickly get away from you, and like most slippery secrets you suddenly find yourself running frantically down a hill after it, trying to scoop up all the precious things it’s smashing in its wake.

Funny enough, I came out to my mother on Christmas Eve. I was 19. I was home from college, and that night I sat her down and, after the exact sort of extremely long and tense pause that Levy speaks of, I… just said it, as one does. It’s amazing how simple it is, for being not at all simple. My mother didn’t even let me get the “ay” of “gay” out before she asked, “Are you sure?” This remains hysterical to me to this day — yes, Mom! Never been surer of anything!

It took Mom some time but she’s fine, we’re fine, all is fine. But that was just half of the story, which is often the least of it with most modern families. My parents divorced when I was little, and for a very long time, the idea of coming out to my father’s side seemed utterly impossible. They’re extremely religious and extremely conservative. We’re talking Pentecostal, speak-in-tongues stuff. The majority of my teenage struggle, coming to terms with who I am, was due to their influence. My gayness was a problem. For them, it would have been if I told them. For me, that meant years of anguish and suicidal behavior before I managed to slam down that blast door, shut out the heat from their hell-fires.

Finding that small space for myself to just survive took a lot of dramatic and violent shutting down of outside noise. I pulled myself inward and small; I told myself that I didn’t want to come out to those people anyway. That they weren’t worth the hassle. I know a lot of that was me standing on a very thin piece of rope, mentally and emotionally. I’d worked so hard just to be able to balance that I worried a judgmental word or look from them might send me spiraling. It’s such a precarious place, those early years — everyone, no matter their place on the Kinsey Scale, spends their teens and twenties struggling to define themselves, but queer people are the only ones who’ve got their family stomping their feet on the scales.

Despite not being out to half my family, I managed to make a life for myself. I met my partner (Sidenote: how have we still now come up for a better word than that?) just a couple of years after I came out to my mom. We’ll have been together 20 years this spring. All of that was going great… and yet I’d go home and not speak of the most important relationship in my life to all of the aunts and uncles and cousins, and of course my dearest, sweetest, most hostilely homophobic grandmother. I very nearly did come out to my dad one year, that is until I spotted the “One Man + One Woman = Marriage” bumper sticker on his car. That turned that particular holiday visit home straight to slush.

So, to me, Harper’s truth spiraling away from her grasp before she even comprehended what was happening rang frightfully honest. Our best versions of ourselves have ways of getting all tangled up like a box of tree-lights when tossed into the viper-pit of familial cross-intentions. You find yourself slipping into harmful old habits with the coziest of ease because, you tell yourself (or maybe the stop-motion-animated reindeer tells you) that, “Hey, there’s always tomorrow for dreams to come true.” In the best sense of it, Christmas morning only sparkles due to the darkness of the night before - the magical anticipation of opening up presents does its own heavy lifting when it comes to the so-called reason for the season. So what happens if all you’re anticipating is a box full of snapping Rottweilers under the tree? Suddenly not so magical! You might hesitate a bit!

I only finally ended up coming out to my family four years ago last month in an angry tirade on Facebook immediately following the 2016 election. I snapped, and I weaponized my decades of alienation. In that moment it felt powerful. In the face of what I knew would be rejection, it felt like a way to reject them in turn. Here, four years later, I remain as furious at them as ever, but part of me wishes I’d forced them to reject me on my own merits, and not via my outburst of righteous indignation. To make them own the bigots they are, without so much of the loud spectacle that they’d driven me to give them their out.

Family is messy, and it can claim surprise victims in its crannies that you can never anticipate. For all of Happiest Season’s Hallmark-sheen broadness, it gets that, down deep into its peppermint-striped and chestnut-scented marrow. I certainly think Mackenzie Davis gets that across in her tremulous and terrified, oft-desperate performance, snapping at Abby at the absolute worst of moments, carving up her best self with every panicked breath. Her eyes thrum with anguish I found painfully recognizable.

I recognize that not everyone may see themselves in Harper. What I recommend is maybe go back and watch the film a second time. I personally found Happiest Season more relaxed and funnier with a second viewing. This time try to watch it unfold from Harper’s perspective. I know, I know, Kristen Stewart is standing there in her stellar suits looking like the coolest mother-lover in Kris Kringle’s marshmallow kingdom. I get it. It’s hard to look askance. But slipping yourself into a pair of warm booties that you’ve never walked in before is good for everybody, festive elves and Grinches alike. And, like Dan Levy said, just try to be generous. We all have our own paths, but no matter how they wind, they’re all hopefully full of love like hearts popping off three sizes too big.

Happiest Season is now on Hulu.