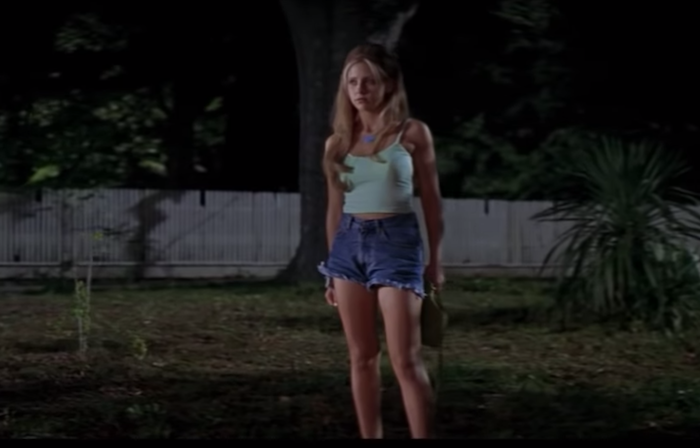 Sarah Michelle Gellar was Done Dirty. ‘I Know What You Did Last Summer’ Had the Wrong Final Girl

It’s Halloween, and I’m a wimp. I live in a weird part of LA that isn’t conducive to welcoming trick or treaters (or holding on to your catalytic converter) and since I went out last night, I most certainly won’t be going out again tonight. This means I will be holed up on my couch watching “scary” (for me) movies until I fall asleep.

The older I get, the less stomach I have for anything horror. I had to watch Get Out in the daytime, with the lights on, and the mute button handy (because it’s a well-known fact things can’t be scary if you can’t hear them, right?!) I bring this up because the list of “scary” movies I’m willing to watch is limited to Leprechaun, the Scream trilogy, and I Know What You Did Last Summer (sequels do not exist in this particular franchise, Brandy Norwood or not.)

Back in the day, teenaged Kate loved her some slasher flicks. Thirty-Something Kate, however, doesn’t really have the nerves for them anymore, so the ones I watch are the ones I’ve seen so many times I know what’s coming. Thus, the list above.

There is, however, one thing I would like to bring up because it bothers me to this day: Sarah Michelle Gellar’s character, “Helen” was done f*cking dirty by I Know What You Did Last Summer. (Related, she was also done dirty by Scream 2, but I’m much less upset about that.) The wrong “final girl” was chosen, in Jennifer Love Hewitt’s “Julie” and I say that as someone who really, really loves The Ghost Whisperer. 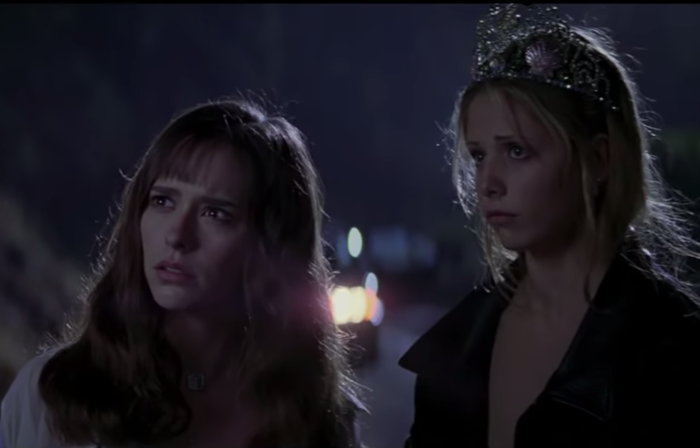 Since movies are primarily made by dummies (gee, I wonder who that could be?) who think women are constantly at odds with each other, we’re presented with Julie and Helen as friends who are at dichotomous odds with each other at all times. One is brunette, the other blonde. One is into her looks, the other into books (since god forbid you can’t do both.) One dresses in tightly fitting clothes that bare skin, the other is almost always in white, and covered up (save for her boobs and occasionally, her stomach.) One outwardly demonstrates her remorse at all times for the accidental killing of a murderer, who shouldn’t have been skulking around a winding mountain road at night anyway, by basically forgetting to shower, and the other is straight up f*cking murdered for not letting her life fall apart as much as the other because she values personal hygiene, even when in a deep emotional crisis. WTF?!

We’re first introduced to Helen in the movie because she’s competing in a beauty pageant and we’re supposed to see her as immediately more vapid and less genuine than virginal-white sweater-wearing Julie, who is there to support her friend. (We mustn’t forget Helen’s unforgivable sin of having blonde hair. I’m pretty sure the vast majority of final girls are brunette for some reason.) However, that stupid pageant was a means to an end for Helen, who shrewdly understood that if she wanted to be an actor in New York, as is mentioned by her, it’s a lot easier to get some auditions under your belt when you’re new to town if you have some accolades to your name. She’s got some cunning to her, I say.

Then, when the s*it hits the fan and the teens murder a dude, who again, was creeping around a mountain when he had no business doing so because it was a night for murderin’ and he was partaking also— Helen (and Julie, and the others) make a bad call, and decide to ditch the body rather than calling the police because stupid fancy-boy Barry, played by Ryan Phillipe, throws a tantrum and demands it to be so. I mean, again, it is the wrong call, but they were young and dumb so I can’t hold it against them. Yet Julie is the one we’re supposed to sympathize with? Helen is f*cking remorseful after the fact, too, dammit!

Her dream of New York crashes and burns, ostensibly because she doesn’t have the energy to sustain it because of the crushing guilt she feels. When we see her again the following summer, she’s no longer the brash, confident young woman we knew pre-accident. She’s turned into a quiet, introspective person who has clearly seen some s*it and is trying to cope, just like Julie is. Yet because Julie stopped brushing her hair and has dark circles under her eyes, she’s the one we’re supposed to believe is suffering the most, and thus, is worthy of redemption? Come on, now! Grief is not a zero-sum game and it definitely manifests itself in different ways. Let’s not forget that neither of them were the ones who were driving the car when it hit the guy or the drunk a-hole who caused the accident by dropping a bottle down the sunroof, to begin with. Their crappy boyfriends hold those titles, respectively. Yet one of those jackasses gets to live, and Helen doesn’t.

Look, I get that one of the things people love about slasher flicks is the body count. I personally enjoy it when Johnny Galecki’s a-hole townie dude bites it via fish hook because dude sucked, so I get it—people have to die in this genre.

…but did it have to be Helen? My resourceful, beauty queen Helen, who doesn’t let anyone gaslight her, and fights like hell to survive!?

She was just as quick-witted as Julie, and definitely more so than Ray, the other survivor. (Who, again, was driving when the car hit the dude, yet he got to live.) They killed plucky Tatum the year before in Scream, when her biggest sin was having terrible taste in boyfriends. Did they have to do Helen the same way for basically the same thing? The answer is obviously, no.

Just look at her fight her damndest when the killer finally comes for her (avoid the end if you don’t want to see her die. I usually close my eyes and pretend that Helen ran away because that town sucked and she left Julie to emo herself out of the situation because it was everyone for themselves at that point and she knew she couldn’t keep it to herself that Ray sucked so she figured it’s just better to blow town than ruin the friendship further.).

Look, Julie is an OK final girl (she’s no Sidney Prescott, though)—it’s just that Helen would have been better.

Now, I know you probably want me to get over it since the movie is 22 years old at this point, but I will bang this drum until my final day. Helen deserved to live just as much as Julie did, and it’s only because of stupid slasher flick rules that she was pre-ordained to die.

Helen, and the audience, deserved better. Justice for Helen!

← When it Comes to Vampires Only 'Blade' Can Compete With 'Twilight' | Tomi Lahren ‏Dressed as Alexandria Ocasio Cortez for Halloween; It Didn't Go Well →