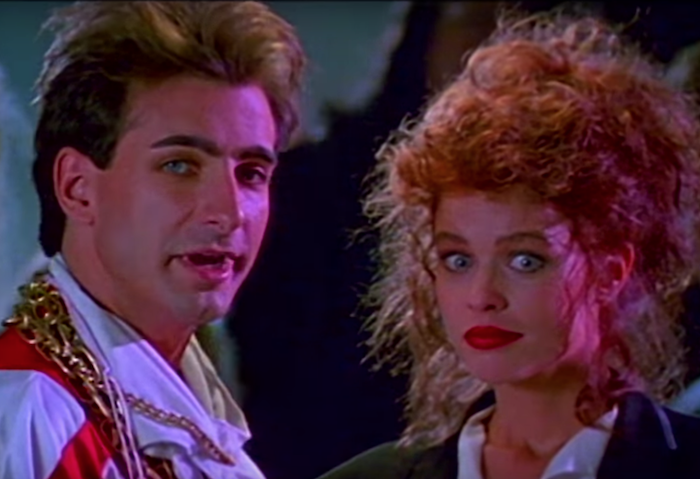 ‘Rockula’ is the Best Movie About Virgin Vampires Ever

When Dustin lost a bet and had to offer me a writing position at Pajiba, I came onboard with a very simple mission: to spread awareness of the best movie about a virgin vampire I knew, Rockula.

I discovered Rockula the only way one should discover Rockula—late night, scrolling through Amazon’s titles of what other likeminded people had watched, after they had viewed the 1987 classic (and in this case, I use that word very loosely) John Cusack movie, Hot Pursuit, which I lovingly refer to as “John Cusack’s mullet movie.” You know, because his hair was business in the front, party in the back.

Friends, Amazon described the movie thusly: “A young vampire cannot lose his virginity because of a curse imposed upon him centuries ago.”

When I read that, I was furious at myself. How could I have gone 30+ years on this earth without having known, let alone seen, Rockula? I am someone who prides themselves on the amount of terrible (and thus, awesome) “B” movies I’ve watched. How could I have such a glaring omission in my education here? Needless to say, I watched it that very night. It was everything I could have hoped for and more.

First, we need to cover the cast list, because it’s a doozy. Toni Basil, Thomas Dolby, Susan Tyrrell, Bo Diddley, and yes, Dean “I was in Summer School” Cameron.

Second, I need to share this scene, because it describes what Rockula is, in a nutshell. It’s Toni Basil dancing and rapping while a dude in a kilt and sequins cheers her on.

Now, here’s what you need to know about that scene: Toni Basil is Rockula’s mom (only he’s called “Ralph” by a lot of people in this movie, but don’t get hung up on that) and she’s dancing like that in front of his date, who is the reincarnated soul of the woman he’s been fated to fall in love with time and time again only to then watch her die because she always dies at the age of 22, on Halloween night, when she’s murdered by a pirate who has a jewel-encrusted peg-leg, with a hambone.

If any of that word salad appealed to you, you are going to love Rockula.

There’s something I’d like to talk about with this movie. Rockula can not only see his reflection, but it’s basically his alter ego who he carries on conversations with, who very much would like to have sex, and thus, he keeps on urging Rockula to get on with it. We don’t see any other vampire talk to their own reflection, and some would say this is an inconsistency. I, however, got fairly intoxicated one night and watched Rockula (again) and the movie’s logic made perfect sense. See, only vampires who are virgins see their reflections—that’s why his reflection is so keen on getting it on. He’s trapped in the mirror world, and can’t escape it until Rockula is a virgin no more.

Was this ever explained in the movie? No. But the truth became crystal clear in my drunk heart and mind, and thus, the mystery was solved.

I bring this up to illustrate a very important point: Rockula is the kind of movie that only makes sense if you’re under an altered state.

I hope by now you have already tracked down Rockula (it’s been available on Prime for the past 2 years or so) and have already begun streaming it.

For those of you who are still holding out, I can only promise you that Rockula has a special ability that I will not spoil for you, but just know it’s so gloriously dumb, it’s worth watching for that reveal alone.

Anyway, I’m going to leave you with one of the best scenes of the movie because what I failed to mention about Thomas Dolby’s character is that he runs a mortuary (because why not?) and this is the television commercial for his business he randomly plays for people (that include two creepy twins are never explained what they’re doing there, or why they’re hanging out with adults) about halfway through the movie because it felt like the thing to do. This is Rockula, after all. Anything goes!