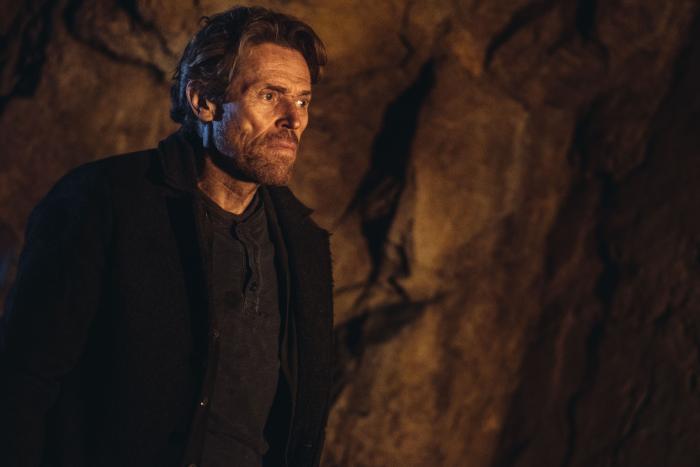 Siberia opens with some darkened credits. Narration rolls in over a hard-to-see list of names of people who worked on the movie. While squinting to decipher if I’d somehow accidentally skipped to the end credits, I heard the faint but distinct voice of Willem Dafoe waxing poetic about the sea. Eventually, there was a picture, and only for a brief moment was I less confused.

Abel Ferrara’s trip through a man’s subconscious has no interest in explaining itself to the audience. In some ways, it’s a virtue, leaving the viewer to decide what’s happening as they make their way along the journey of a presumably troubled man. In others, it’s a gamble, since lots of us might pack our bags and head out to find something simpler to follow.

Clint (Dafoe) is a tortured man who’s taken an apparent refuge in, well, Siberia. There, he mans a small café frequented by locals. Their Russian dialogue is not subtitled—an early hint the film is not going to spend time spoon-feeding the narrative—while Clint serves them warm drinks and alcohol. One such patron is a pregnant woman, who comes with her elder mother. After serving the pair, Clint strokes the woman’s nude body while her mother yammers nearby. Is Clint the father of this woman’s child? Is their interlude sex-scene a flashback or a fantasy? Dear reader, heaven only knows. Soon after, he’s attacked by a bear in an encounter that feels dream-like. And I guess it was, as Clint is soon moseying through a fractured reality that feels like a collection of past ordeals.

Director, Ferrara (who shares writing credit with Christ Zois) is known for gritty stories, oft set in New York. Many of us would blink through his popular titles before going “of course!” when someone mentioned Bad Leitenenant, his filthy tale of a corrupt New York police officer played by Harvey Keitel (not to diminish the cultural standing of genre favorites Ms. 45, Body Snatchers, and The Driller Killer). Nowadays, he spends more time with Dafoe, this being their sixth collaboration (which invites otherwise unnoticed comparisons between Dafoe, Keitel, and Christopher Walken, some of Ferrara’s other usual collaborators). You’d presume a lot of trust between the duo as Dafoe takes gigantic swings at playing multiple roles in this feature.

As Clint ventures from his café, he tours through different places and states of being. Almost like chasing him through the seasons, the film follows him through blistering cold snow onto sparkling green grass. He meets characters that are maybe within him, like a “devil-on-your-shoulder” reflection of himself that drums up his dual performance in Spider-man. Or they are parts of him, like Clint’s father (also played by Dafoe) in classic Ray-bans and some unmoved shaving cream evocative of all things paternal. Some are peripheral to him, like his wife and child. Each of these are characters with whom Clint appears to have unfinished business causing them to haunt the subconscious he is meandering through. Ferrara described the intent of this project as wanting “to see if we can really film dreams—our fears, our regrets, our nostalgia.” In creating it, he crafted a beautiful road to nowhere that sends his lead on a path trough not much more than a ninety-two-minute runtime.

Films have tried to tackle dreamscapes before and many creators have been consumed by trying to portray them. David Lynch leaned on dreams for much of his narratives, most obviously in Twin Peaks and Mulholland Drive. Christopher Nolan took on layers of dreams with Inception. Wes Craven ripped from his own dreams to create A Nightmare on Elm Street. For many dreamscape features, the dreams are used to suit the story, but for Siberia, they function like an experimental art piece that just places them in the center of a screen. The entire movie feels like the interlude that might be peppered into Come True or Wild Strawberries as opposed to something that can stand on its own.

In following Clint’s broken subconscious in a tale held together by Dafoe’s character work, the movie is rendered inaccessible. It’s intentionally flighty enough to give the audience only the information it chooses to, but it’s simply not enough. Between the audience and Siberia there is a wall built from fractured cuts and jarring scene changes that make it impenetrable. It has the fever dream vibe of The Lighthouse (another Dafoe lead picture filled with tales of the sea) without any of the wit. It feels like a recommendation from the type of film-bro that would use the word “metaphysical” incorrectly to describe it.

It’s futile attempting to pluck meaning from the moving painting this film wishes to be. It’s best enjoyed by zoning out and humming along. In trying to derive something, I was left looking for clues about what I missed, like meaning buried in the rules of the casino game in the bar scene or the name of the metal band in the concert scene. Mostly, I was wondering if I missed when exactly Clint dropped the peyote.

Siberia is in select theaters as of June 18 and will come to digital and On Demand June 22.

← 'Let's Lick T*ts!' 'Rick & Morty' Season 5 Premiere Dilates Your Timestream | Looking Back At 'The Rocketeer' On Its 30th Anniversary →