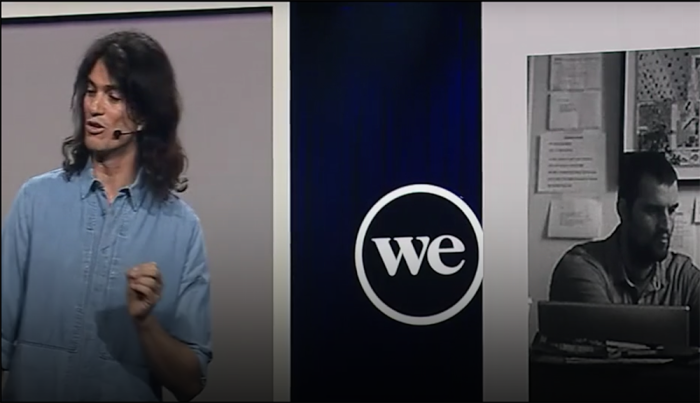 Review: ‘WeWork: Or the Making and Breaking of a $47 Billion Unicorn' May Be the Modern, Real-World Version of Oliver Stone’s ‘Wall Street’

The new documentary WeWork: Or the Making and Breaking of a $47 Billion Unicorn exposes the complete bullsh*t, like the Theranos exposés before it, and helps us understand why many companies never live up to their “valuations.” WeWork is a preposterously extreme example, but it’s often those examples on the edge that really shine a light on the broken system they’re a part of.

Director Jed Rothstein uses a number of insiders and journalists to help tell the story of WeWork’s origins, rise, and self-inflicted burnout. The two co-founders (Adam Neumann and Miguel McKelvey) both grew up on communes and, after the 2008 financial collapse, leaned in on technology/startup optimism to take on a co-working space that they believed could be made into something less “corporate and institutional.” Neumann, the face of the company from its earliest days, was the apparent driving force behind this new company and its vision, which was to “build the largest networking community on the planet … the world’s first physical social network.” Despite every appearance of being a real estate company, which leased large spaces and rented them out in sections, Neumann insisted that WeWork was a technology company.

It’s unclear if Neumann truly believed his own bullsh*t in those early days. What is clear is that he got a lot of others to believe it. As one talking head in the film puts it, “WeWork embodied an optimism and this millennial excitement … [to] rebel against the office culture of the ’80s and ’90s.” While the film has trouble piercing into Neumann himself (compounded by the fact that he and his wife unsurprisingly declined to participate), it expertly shows how this house of cards was built, taking the company from $97 million “valuation” in 2012 to $47 billion just nine years later. Along the way, we see stunning excess, such as the WeWork Summer Camp, a 72-hour bacchanalia that has my liver cringing. We see the cultish worship of the WeWork “ethos,” perhaps best encapsulated by “WeLive,” some NYC apartment commune that people gave up their lives for, which was seemingly little more than a sex den of broken dreams. We also see the cult of personality that Neumann built up around himself, which leads to a preposterous revelation that the in-office barista calls a latte a cappuccino and vice-versa because Neumann did not know the difference. This apparently went on for years. That’s bananas.

The documentary digs into the nuts and bolts of why this was a financial house of cards. Yet, it does so in a way that is easy to grasp and empathize with, alerting the viewer that employees blindly sacrificed wages for equity, not really understanding what that “equity” was potentially worth. That “worth” was driven down by reckless spending, unending propaganda intended to prop up select management, and books that are basically cooked. Even living in the “startup world,” seeing how they goosed their financials, going so far as to create their own modifications of well-established financial metrics, was astounding.

If it feels like I have given too much of the story away, trust that I have not. Knowing the broad strokes is not the same as seeing it all put together, staring in awe at how so many fell so deep for what was little more than parlor tricks and shell games. It is also an important story about personal and corporate greed in this new technology-driven capitalistic society we live in. One of the company’s former lawyers says: “And to me, it just seems normal. They were raising money every year, their growth expectations were high. I didn’t think it would be … as transformative as it ended up being.” The “it” in that sentence is referring to an investment of four billion dollars. That’s it right there. When you don’t think that kind of money is going to be “transformative” and lead to wild excess, corruption, and greed when left unchecked … I just, I can’t.

Neumann was ousted from the company (with a whopping pair of $1.7 billion golden handcuffs), which otherwise struggles on, claiming that it will be profitable later this year. The shame of it is, behind the cult bullsh*t, there’s something that WeWork was/is trying to do. There are workers and companies that can find true value in a less-corporate, more “social” version of shared workspaces, especially in this post-pandemic space we’ll eventually return to with increased remote, decentralized working. For the sake of most of WeWork’s employees, who were decent and hard-working folks trying to do good, I hope the company can still find success. Because much as I’d like to hope that the real happy ending here would be all of us learning from this story of greed and bullshit valuations, that dog don’t hunt.

WeWork: Or the Making and Breaking of a $47 Billion Unicorn had its World Premiere at SXSW Online 2021 and is now available on Hulu.