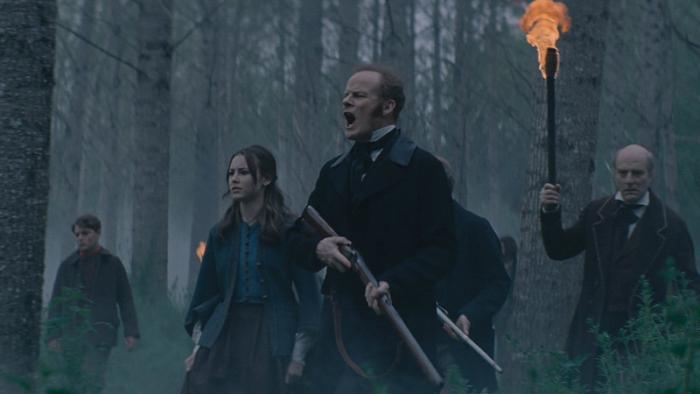 The metaphors of our modern monsters have proven remarkably resilient: Vampires have come in handy standing in for sex, disease, and drug addiction; Zombies are every one of us sitting in front of the TV every night. (“Also Capitalism!!” screams Uncle George Romero from the other room.) Then just last year writer-director Leigh Whannell (with a massive assist from Elisabeth Moss) introduced the idea of the Invisible Man to the age of ghosting. But the Werewolf, I think, has had it a little trickier. Not just because its metaphors are blunt—like the vampire it’s the fear of our own bodies betraying us, just sans the sexy—but because a good werewolf demands money and ingenuity.

Far more than the sight of a person becoming a vampire (slap on some fangs and we’re good) the werewolf demands the on-screen spectacle of a transformation scene. More than the intellectual metaphors it’s the physicality of the werewolf that we remember—Lon Chaney Jr.’s wrists blurring to fur; the snout poking through the open human mouth in The Company of Wolves; and of course David Naughton thrashing about naked on that cramped London flat’s floor. (Okay, so David Naughton did manage to make werewolves sexy.) We need to see and we need to believe the beast, and that’s expensive and visually demanding.

But then too much money can actually be a problem. CG has proven a disaster for the genre, ruining the were-movies of everyone from Wes Craven to Joe Johnston (pour one out for Mark Romanek) with weightless snarling pixel-things hopping about like video-game creatures. The balance between thoughtfulness and technical wizardry has begun to feel frankly impossible. The only werewolf movies that have gotten it right over the past couple of decades seem to be the smallish ones that lean almost entirely on metaphor for effect—Ginger Snaps, Late Phases, Good Manners. Dog Soldiers might be the only one to aim big, monster-wise, and not sputter out.

Which brings us to Eight For Silver, writer-director Sean Ellis’ new contribution to the werewolf medley playing Sundance, which, to its favor, aims high, but which sputters and sputters hard about halfway through. On the good side I’m of the mind that setting your horror film in a period setting always earns you bonus points off the bat, and Silver kicks itself off somewhere deep in the nightmare trenches of World World I—so far so good! Soon we meet our main character of John McBride as an old man (Boyd Holbrook, briefly buried under liver-spots) and we flashback from there, via the memory attached to a handful of silver bullets, to 35 years even earlier—better still! The ye-olde-timier the better!

Those silver bullets lead us back in time to a small town in the countryside and a group of dastardly landowners who we see almost immediately jump full in to their dastardliness and slaughter the folks with the true claim to the land—in this case a small band of Romani people, and here the film leans hard into the stereotypes of werewolf movies past— leading to, of course, the big curse. Before we know it all the town-children are dreaming of flames and fangs, and of a human scarecrow (the one lasting remnant of the slaughter) that is beckoning to them through the woods…

Eight For Silver is swathed heavy in Hammer Films vibes for a good while, in both the best and worst of ways—best in big costumes and atmospheric brown fogs; even some heaving bosoms of both the female and male variety are present in the mix. But it’s also vibing classic Hammer in the way they could often be static, talky things—I suppose if Ellis wanted to nail that specific aspect congrats, he managed it. (There’s also a lot of let’s-call-them-retro “gypsy curses” about, which I didn’t realize were a thing we were still doing in 2020?)

Overall there’s an unfinished quality to the film to be honest, which made me wonder if this fest screening might’ve been a rush-job—for one the film is begging for a more prominent score that never materializes; there’s letting the silence speak and then there’s dropping us in a barren emptiness, and Eight For Silver too often trends towards the latter. The cast is also, save a few of the smaller roles, swamped by their costumes and the moody scenery—only Alistair Petrie as the cursed patriarch and Roxane Duran as a jinxed maid leave much of an impression.

But the film’s real ruin is, sure enough, its monsters, which are un-scary CG messes—un-scarier and un-scarier the more we see of them. And you know they know it’s problematic when the camerawork and the editing all but jumps itself straight into a blender whenever the creatures turn up—I’ve never seen a film strain so hard to un-show what it is showing in the exact same breath; it’s skittish and seizure-induing, leaving more of a mark on our pained eyes than our throats or constitutions.

It’s a shame too because Ellis does have some fun ideas he’s trying to inject into the werewolf mythos, timely ones about plague and infection—there’s a little Lovecraftian intermingling of DNA with John Carpenter’s The Thing that worked for me, especially in a gross-out autopsy scene. An autopsy scene which, it should be noted, relied mainly on goopy practical gore effects — funny how that works. And the thing is yes, I am aware of the budgetary constraints of the practical approach (expensive) versus the computer-generated one (cheap). But that extra-textual knowledge won’t ever make the damn cheap things scary.