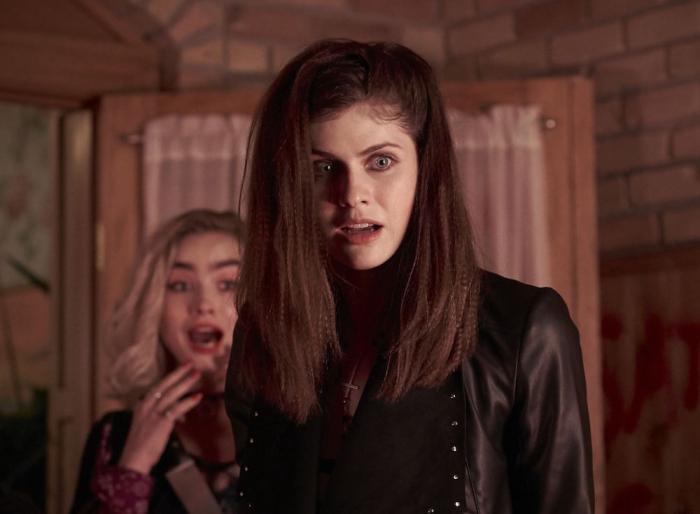 It’s been a good time for Satanic-tinged horror movies, from the schlocky Porno to the campy Satanic Panic, and it’s not hard to imagine why. At this moment, we live in a country run by the personification of humanity’s worst instincts, surrounded by the barrel-scrapings that voted for him. What used to be a simple political divide is now an essential opposition of values, of beliefs — and it’s hard not to look at those across the aisle and wonder if maybe they’re Evil with a capital E. Be honest: If you found out that someone, somewhere had performed a blood ritual to make this our reality, would you even be surprised? Or would knowing ALL THIS is the result of a “Hail, Satan” actually be oddly comforting?

On the surface, We Summon The Darkness is yet another horror/thriller joining the timely satanic fray. Three teen girls go on a road trip to a heavy metal show in 1988, while news reports breathlessly announce that there’s a satanic cult performing a ritualistic killing spree in their neck of the woods. Along the way they encounter three young men, and the six teens decide to party the night away together, bodycount permitting. If that sounds like an all-too-familiar premise, then I have some good news and some bad news. The good news is that fortunately not all is exactly as it appears, and the film has some rather interesting twists in store… if you’re patient enough to wait for them. The problem is that the film, directed by Marc Meyers (My Friend Dahmer) and written by Alan Trezza (Burying the Ex), spends almost half its running time getting to the twists — a one-two punch that flips the script on who the real victims are and reveals that the “satanic rituals” were a cynical ruse to push people into the arms of the Church — and then squanders all that momentum by continuing at a lackluster, predictable clip. I respect the absolute hell out of the film’s intent — please, tell me more about conservative Christian hypocrisy! — but ultimately that’s all that’s on offer, and that letdown stings all the worse if you chose this movie hoping for some distracting, unholy fun.

Alexandra Daddario (Baywatch, the Percy Jackson joints) at least seems to be enjoying herself as an anti-Scream Queen. She plays Alexis, the ringleader of the girls and the daughter of a fire and brimstone preacher, and she brings a sneaky sort of zeal to the part as her swagger devolves into insanity. Joining her for the ride are Val (Maddie Hasson), a girl whose single defining characteristic is how pea-small her bladder is, and Bev (Amy Forsyth), the innocent one who is not entirely comfortable with the schemes of her new pals. A healthy amount of foreshadowing means it doesn’t come as any great shock when the girls shed their sheep’s clothing and reveal that they are the wolves of the movie, drugging and stripping the boys they just picked up at the concert, though the reveal that they aren’t Satanists at all but Christian zealots is well-played. As the night wears on, uninvited guests and a nervous Bev derail all of Alexis’s plans, but by then the movie feels like it’s on autopilot, having already shot its wad with the aforementioned reveals. The pacing drags, the action is a repetition of screaming and running and hiding, and even the anticipated arrival of Johnny Knoxville as Alexis’s dad, Pastor John Henry Butler, fails to provide any spark. You heard me: Evil Christian Jackass Daddy manages to be boring. Wasted opportunity, much?!

If there’s a perfect metaphor for the potential and the failure of We Summon The Darkness, it’s Bev’s weapon of choice: an outboard boat motor. On paper, I’m sure it seemed like a great idea! It’s big and loud and unexpected, like the lawnmower from Dead Alive. On screen, however, that motor is a clunky eyesore that grinds all the action to a halt — and that’s even ignoring the fact that no outboard motor I’ve ever seen actually started on the demand every time, a fact this film conveniently ignores. The novelty of seeing a teen girl threatening people with a boat motor is ultimately short-lived, and nothing that happens in the rest of that motor’s screen time proves it was anything more than an improbable gimmick awkwardly shoehorned into the proceedings long after it wore out its welcome. That’s the movie in a nutshell, sadly: a few neat ideas without the vision to execute them, and a catchy premise that rests on its laurels instead of delivering the over-the-top splatterfest we’re really desire.

We Summon The Darkness is available on VOD and Digital HD on April 10, 2020.