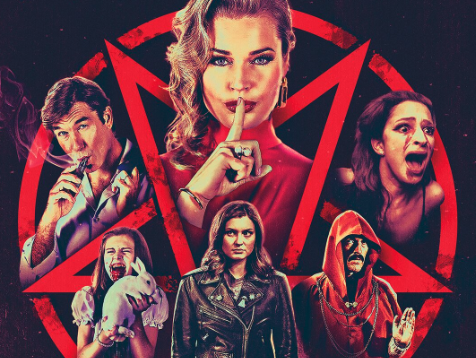 Review: 'Satanic Panic' Blames Everything On Your Parents (Because They're EVIL)

Behind the shadows and beneath the blood, Horror has always been a genre with something to say. In order to exploit our fears, it has to identify them — and in laying them bare, it reveals a kernel of truth about our world, our society, ourselves. And let’s face it, there’s a lot to be afraid of right now! Our planet is dying, our neighbors might be Nazis, and our kids can’t move out of our basements because the rent is too damn high. Everything is terrible, and while we know what needs to be fixed, it’s hard to imagine where to begin. So instead of picking one fear, Satanic Panic cuts straight to the heart of all evil: The generation that got us into this mess in the first place. Namely, our parents. And along the way it gives Rebecca Romijn an excuse to cut through some hearts of her own, so really everybody wins.

To be clear, this movie is very much a horror comedy, and it dons both hats proficiently. Director Chelsea Stardust has a knack for crafting gore that is both abundant and inventive, leaning heavily on internal organs suddenly made external. And worms. Oh, the worms. Then again, she got her start in the industry as Jason Blum’s assistant before moving on to directing short films and eventually All That We Destroy, the eighth installment of Blumhouse’s Hulu horror anthology “Into The Dark,” so it’s no surprise that she’s an up-and-comer with some big ideas. Here those scares come with a playful wink and a light touch, because the point isn’t what’s happening so much as who is doing it — and the villains in this case are a coven of rich, upper-crusty satanists with a ritual to complete before sunrise. It’s a self-aware film with biting dialogue, where characters breathlessly drop the kinds of distractingly clever lines that make you imagine writers behind the scenes patting themselves on the back for crafting them. In this case, the writers are Ted Geoghegan (Mohawk, We Are Still Here) and Grady Hendrix, whose Ikea-but-make-it-evil novel “Horrorstör” got a lot of attention a few years ago. If I’m being honest, I’ll forgive any amount of improbable dialogue that manages to refer to a vagina as both a “cooch-shute” and a “revolving door of ground beef” in the same breath.

Why vaginas? Well, it turns out that this coven is attempting to summon a prince of Hell named Baphomet, and to do so they need to birth him into the world through the womb (and other bits) of a virgin. Romijn plays Danica, the HBIC of the coven, who has been grooming her daughter Judi (Ruby Modine, Happy Death Day) to be the sacrifice — until she discovers that Judi, uh, no longer qualifies. Enter Sam (Hayley Griffith), the friendly pizza delivery girl whose first day on the job takes her to the privileged McMansion-y neighborhood of Mill Basin… and straight to Danica’s doorstep (it takes a lot of pizza to sustain a bunch of satan-loving dipsh*ts, apparently!). As luck would have it, Sam just so happens to be a 22-year-old folk singer virgin — and thus becomes the necessary final piece in Danica’s grand scheme. She soon finds herself locked up in a room with Danica’s husband Samuel, who is also on the coven’s chopping block for reasons. Samuel is played by Jerry O’Connell sporting a chin-patch beard and a vape pen, and while the scene is nothing more than a glorified cameo I could have watched it FOR-E-VER. Anyway, Samuel tries to take Sam’s virginity to “save her” from the ritual (“Did you see what you made me do? I’m a feminist!”), and then he accidentally shoots himself with a gun because he’s, like, so “not even a gun person.” He sucks in literally every way, basically. In the confusion, Sam makes a break for freedom, only to run to a neighbor’s house for help and be nearly re-captured by the babysitter.

You see, the whole of Mill Basin seems to be in on this Baphomet gig, for a very simple reason: “Death To The Weak, Wealth To The Strong.” That’s their ritualistic chant, but it’s also their mission statement. They are willing to sacrifice anything, including their own children, for money — and the power and comfort that comes from it. As the movie progresses, it becomes clear that the sins of the residents aren’t satanic, really — it’s their gleefully myopic self-interest, and the way they look down on anyone beneath their class or calibre. It’s a particular blend of overwhelming greed mixed with lack of foresight, as though having everything right now is all that matters, and children are just lazy hangers-on who are lucky to get a taste of what their parents have wrought.

Sam accidentally thwarts the babysitter and incidentally saves Judi from death via strap-on drill-do, and from here on out it’s a race against dawn as the young women team up to avoid witchcraft, slaughter, and demonic baby-making. While the film culminates in the exact sort of demonic ritual you’d expect, there are enough twists and jokes to hold your attention. It’s also, for what it’s worth, a remarkably chaste film. Despite there being several scenarios ripe for sexual violence, that’s not a threat that’s really on the table. Even the late-stage nudity is thankfully not on the part of Sam or Judi. It helps that women boast the majority of the screen time. The few male characters are there as punchlines, and Stardust is more interested in female power dynamics than aping a male gaze for trope’s sake.

More than anything, Satanic Panic tries to build a passionate exploration of the Boomers vs. Millennials war that’s being waged in op-eds and on Twitter as we speak. Sure, Romijn and O’Connell and the others aren’t actually old enough to be Baby Boomers, and the bitter barbs the characters fling at each other are a little too on-the-nose, but the point being made is still clear. On one side are the people who already have it all and still want more, and on the other side are the people who never had a chance to get a piece of the pie in the first place. Sam is the daffy heroine in the middle — a busking airhead struggling for gas money, who it turns out has overcome her own very real struggles (medical in nature, because HEALTH CARE IS ALSO A PROBLEM, Y’ALL) the likes of which these elites can’t fathom. In that sense, it’s a familiar enough tale and a ripe horror premise. If the execution sometimes lacks finesse or an ounce of subtlety, well, at least you get to see Romijn vamp the hell out for an hour and a half.

Satanic Panic is in theaters and On Demand/Digital as of September 6.