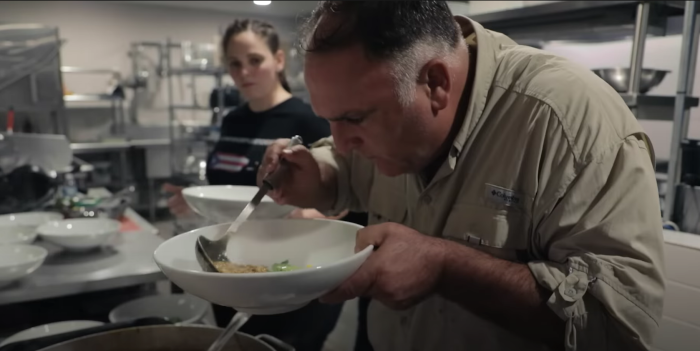 Review: ‘We Feed People’ Shows That Humanity Still Has a Chance

It feels increasingly hard these days to feel good about society as a whole. Here in the States, our personal liberties are being actively eroded, the economy is tanking, cops are being extra-funded to stand by while our children are murdered, the vast majority of our politicians are either immoral assholes or ineffectual hacks, and the very nature of our “democracy” feels on the brink. And internationally, well, except for the fact that most places have figured out basic gun control, things don’t look or feel that much better in too many places. It’s incredibly easy to be pessimistic and feel hopeless which is why it’s good to be actively reminded that we shouldn’t stop what we’re doing.

But if you want to feel some real hope for humanity, check out We Feed People, Ron Howard’s new documentary about José Andrés and the World Central Kitchen.

For those unfamiliar with Andrés, the film spends some time showing how he broke into the culinary scene by bringing absolutely fantastic Spanish cuisine to the US (particularly in DC). And like many in the ’90s and early 2000s who rode the wave of celebrity chefdom, Andrés started to become a brand unto himself. But then Haiti was devastated by a 7.0 earthquake in 2010 and, as Andrés puts it, “you never know when the call is going to arrive.” This was his call, and he found himself quickly forming the World Central Kitchen non-profit and heading down to Haiti to try to help.

What Andrés quickly learned was that in massive recovery efforts, “food becomes an afterthought,” with the default “meal” being made widely available being MREs (sealed ready-to-eat brown bag army slop). Why not make better “meals ready to eat” with, for example, a sandwich and some fruit? World Central Kitchen would not just offer actual food - good food - but would do it in a way that is empowering to locals. Andrés found that people don’t want to just put out their hands and lose dignity, and so WCK hires locals, works with local food businesses, etc., to make the whole community a part of this food portion of the recovery effort and to leave them empowered to continue when WCK moves on.

Howard cuts back and forth through time over the course of the documentary, rather than simply telling a chronological tale, sprinkling in relevant parts of Andrés’ backstory while showing WCK’s efforts in 2017 (Hurricane Maria in Puerto Rico), 2018 (volcanic eruption in Guatamala), and 2020 (Navajo’s dealing with the highest per capita COVID cases in the US), among other efforts. Throughout, Howard highlights the basic financial struggles the kitchen has faced, such as the Red Cross being unwilling to contribute to the Puerto Rico recovery efforts because they found Puerto Rico hard to fundraise around. SIGH. But more importantly, Howard shows the basic humanity and humility of these efforts.

The humanity is apparent in every scene where you see those who are helping WCK and those helped by its efforts. The humility comes from the way Andrés and his team both deal with the locals and general chaos and misery of each of these situations. Early on, when WCK was helping in Haiti, Andrés notes how he was there “making the best beans in the world,” but a local woman told him these were no good. Sure, they might be “the best,” but “this isn’t how we make our beans.” And so Andrés listened and learned to make food for the Haitians that was their food, respecting the locals and establishing an important creed for World Central Kitchen, “to make sure what we are feeding is what the locals love to eat” and, through that, to try to “make sure that food is an agent of change.”

It’s so very easy to look at the state of everything and struggle to find the path forward. What We Feed People is a stark reminder that for every cynical politician who continues to fail us, there is someone else out here doing the work and making a difference. It also shows us the everyday people who “share the same call to action, a call to empathy.” I still find myself struggling to see the way out, but there’s something about what the World Central Kitchen is doing, and how it’s doing it, that gives me hope.

We Feed People had its world premiere at the 2022 SXSW Conference and is currently streaming on Disney+.

← 5 Shows After Dark: 'We Own This City' First Season Finale, 'Norm Macdonald: Nothing Special' on Netflix | Is 'Star Wars' Done Making Movies? →