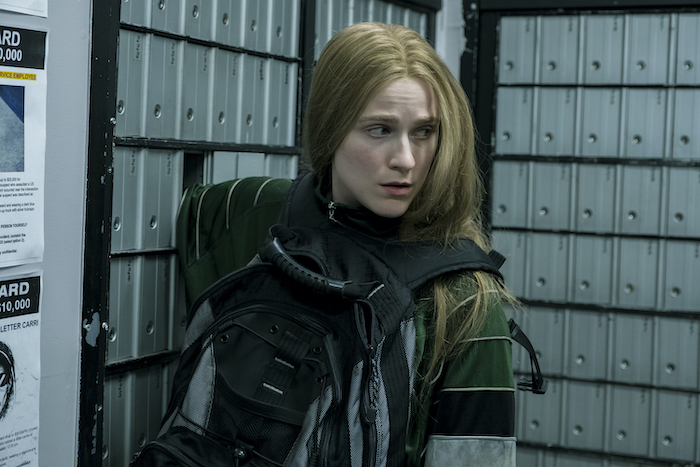 The latest film from multi-hyphenate Miranda July (Me and You and Everyone We Know), Kajillionaire is always offbeat, frequently intriguing, and occasionally even profound. Front and center are the Dynes, blue-collar family grifting trio composed of mom Theresa (Debra Winger), dad Robert (Richard Jenkins), and twenty-six-year-old daughter Old Dolio (Evan Rachel Wood, and yes, the name is eventually explained). They scrounge by on giveaway prizes, petty theft, and other small crimes, but they’re scrappy by design. The more you hear of the elder Dynes, the more they seem like the sort of proud beggars who got a bad break once upon a time, decided they’d say ‘f*ck the system’ forever and insist it was they who initiated this falling out with capitalism and not the other way around.

Kajillionaire is one of those titles that proves cleverer in retrospect than it first appears, a term whose inherent paradox—on the surface it means a whole lot, but since “kajillion” isn’t exactly a real number it doesn’t really mean anything at all—resonates thematically throughout the whole film. Kajillionaire is many things, but one thing it isn’t, in all honesty, is a comedy; it feels much more accurate to say it’s a drama with a healthy appreciation for the absurd.

While Theresa and Robert elected their fringe swindler lifestyle, Old Dolio did not. Isolated from any sort of human connection save her parents, who regard avoiding any form of affection as a matter of principle, she’s too far down the rabbit hole to understand how screwed up her life is—or to even imagine anything different. Things like stealing mail and collecting the suds from the neighboring bubble wash that spill over into the dilapidated office space the Dynes call home several times a day are second nature to her. It’s deeply refreshing to watch Evan Rachel Wood show off her range as an emotionally stunted actual human instead of a super-android, and overall her performance is brilliant, although the choice to force her voice down an octave never quite fully convinces. As strange as her parents are, it’s hard to imagine them instructing her to do so, considering their “work” inherently values seeming less suspicious not more, and if the affect is supposed to be Old Dolio’s one rebellion introduced upfront it feels like a rather strange choice, but then again this is a rather strange movie.

Enter Melanie (Gina Rodriguez), an extrovert so bubbly her character sometimes feels a little flat. She couldn’t be more different than Old Dolio, and that’s kind of the whole point. It’s their night-and-day dispositions that draw them together, each woman looking for an escape from her normal life. Even if Old Dolio’s “normal” is decidedly on the abnormal side.

Utterly bored with her usual 9-to-5 hustle and the unremarkable but harmless ramblings of her well-meaning mother, Melanie crosses paths with the Dynes in the midst of a scheme and decides to invite herself along. Initially jealous of Melanie’s easy repartee with her emotionally unavailable parents, the dynamic between the two women quickly becomes less Mayor of Casterbridge and more meet-cute. While the theoretical premise for their attraction makes sense, the chemistry doesn’t always convince, nor does a scene where Melanie seems to be charmed/aroused by having her acrylics peeled off her nails one by one, which has been reported to be the way to a woman’s heart literally never. But I digress.

In a way, there are almost several movies within Kajillionaire, but none of them feel complete. In the process of watching you wonder if everything will click together in the end and form a cohesive picture; while there are definitely some thematic through-lines, it ultimately feels like a film so committed to a particular kind of crisis of identity that it has one itself.

From Drive to Selah and the Spades, movies have been enamored with the fable of the scorpion and the frog ever since Orson Welles’ 1955 film Mr. Arkadin first brought it up on screen. Kajillionaire presents the rare example of a film that seems to have the moral of this tale at its heart but never recites it directly. For those unfamiliar, the story goes like this: a scorpion convinces a frog to give him a ride across a river by promising to be good, then stings the amphibian on the journey anyway. The frog is like, “wtf,” the scorpion shrugs and says, “I am who I am,” and then they both drown and die, the end. The moral of that it’s easy to believe things when people tell you what you want to hear, but ultimately people will be who they really are—basically, the most downbeat variation on the general theme of “actions speak louder than words.” Raised on the lies and manipulations of a pair of two-bit con artists, Old Dolio spends the film coming to terms with what she really wants and realizing that there are ways in which you can only get from other people what they are willing to give, no matter how skilled you are at sleight of hand.

Kajillionaire is a deeply weird film in ways that sometimes work, sometimes don’t, and never quite congeal into a truly cohesive whole, but for its faults—and sometimes even because of them—it’s a breath of fresh air that’s still worth the journey.

Kajillionaire is currently in theaters and will be released on PVOD October 16, 2020.