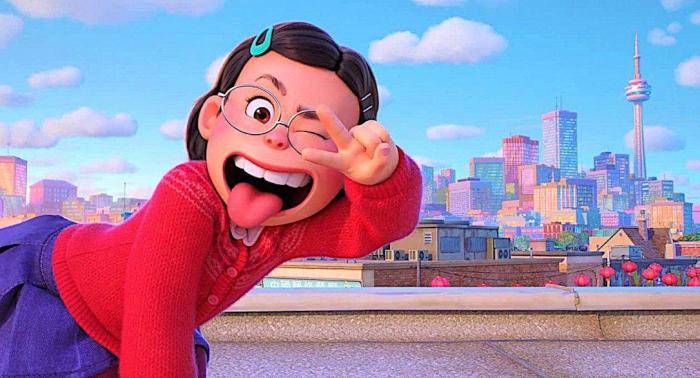 Review: ‘Turning Red’ Will Make You Want to Listen to Pop and Let Down Your Fur

Aunt Flow, Shark Week, The Blood Festival — all viable euphemisms for that pesky little time of the month for those of us with a uterus. Maybe the next in a delightful line of Period Puns is the red panda, Turning Red’s metaphor of choice for menstruation. Pixar has a sparkly history of portraying the hiccups of humanity and their newest (and first to be solo directed by a woman, and the studio’s first Asian led film) is a sparking tale about young womanhood and the power of female relationships.

Mei (Rosalie Chiang) is a street-savvy Torontonian who spends her time hanging out with her friends, trying to please her mother, and obsessing over the cute boys in 4-Town (perhaps a nod to the Toronto suburb’s own b4-4?). Like many teens in 2002 (when the film is set), Mei’s priorities are her Tamagotchi, her grades, and concert tickets for her and her three best pals. Things change for Mei when a little red monster shows up one day; not that one. Well. Kind of that one. One day, after some unexpected emotional volatility, Mei wakes up to find she’s transformed into a red panda. Mei’s mother, Ming (Sandra Oh), comes to her rescue with a box of pads and the story of her ancestors’ red panda blessing. The women in Ming and Mei’s bloodline are all blessed … or cursed … with the power of the red panda, a beast that they’ll transform into with the right blend of emotions. In order to be cleansed, a ritual must be performed during the red moon to trap the panda in a wearable totem. Struggling with news of her changing body, Mei tries to balance her teenage life with the monster that makes her feel smelly, gross, and comes with noticing boys she likes.

This is, of course, a metaphor for puberty that tracks through the women in Mei’s family. Beyond being a metaphor, it comes paired with direct references to the old crimson tide with Mei’s mother presenting pads, ibuprofen, and a hot water bottle as solutions to Mei’s bodily changes. When Mei hides herself from her friends, they present her with pads, too. It’s a beautiful portrayal of the stresses of adolescence that also finds warmth in the embrace of your best gal pals. The support of Mei’s friends is what gets her through the scary time, paired with the guidance her mother provides. It’s a sweet tale of growing up with a uterus that encapsulates all of the awkwardness and cringe of visual fanfic and choreographed dances. It’s an honest portrayal of puberty and parents’ expectations interrupting a life spent on math homework and birthday parties.

The parties and dance breaks aren’t just fun moments of buds being pals being friends, they frame the musicality of the movie. From the top, Mei’s introduction comes with a specific rhythm that she carries with her through the story like a marching band’s bass drum. Moments are accessorized with music, from the songs sung by Mei’s mother and aunts, to classic 2000s bops, to the boy-band tracks (created by Billie Eilish and Finneas O’Connell). This all culminates in a magical moment where a chorus of singers is needed for the ritual, and it’s achieved via a blend of Mei’s family’s Chinese song and the pop track beloved by Mei and her friends. In the end, the harmony of all their voices makes the most direct comment on the Chinese-Canadian experience and highlights why Canada (and Toronto) are referred to as a cultural mosaic.

We have to assume these sentiments came naturally to writer/ director Domee Shi (who co-wrote with Julia Cho), a Chinese woman who moved to Canada at a young age. Shi previously wrote and directed the Academy Award winning short, Bao about a Chinese-Canadian woman experiencing empty nest syndrome (and she was perhaps nodding to her short by featuring a bao bun in her majestic cooking scene with Mei’s father). At the helm, Shi brought something truly magical to life, especially in the animation style which not only paints a gorgeous portrait of Toronto, but also highlights different characters of different ethnicities in a way that breaks free from some ‘out-of-date’ styles.

This delightful little tale of budding womanhood uses a simple red monster as a metaphor for the ol’ red monster to create a pure and sweet image of coming-of-age. Mei is a delightful lead and a familiar version of the self-assured dork many of us either were or ran into at some point. It’s a cute-as-a-button story about the power of relationships, found family, and finding yourself that feels like the warm embrace of a hot water bottle gingerly placed over your cramps.

‘Turning Red’ is available to stream on Disney+.


← Wendi McLendon-Covey Addresses the Jeff Garlin Situation on 'The Goldbergs' | Why Did Britney Spears Deactivate Her Instagram? →