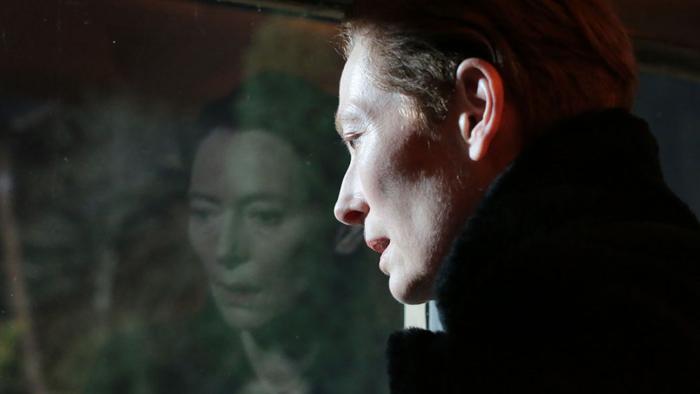 It seems impossible that Tilda Swinton has never starred in a gothic ghost story before, doesn’t it? Once the picture of such a thing occurs to you it, it does so with a smack of utter clarity upside the head—here is an otherworldly creature wandering among us, pale and slight as a spectre already. How easy is it to imagine her wandering the hallways of Guillermo Del Toro’s Crimson Peak or the like? She’s played Angels and White Witches and Ancient Ones, and more than a few characters haunted by their pasts - The Deep End and We Need To Talk About Kevin are both movies that saw her disassembling in the wakes of her children’s sins. And just last year in ​​Apichatpong Weerasethakul’s Memoria she found herself haunted by a sound—one reverberation that might have come from her dreams and which sent her on a vision quest through the jungle, abstracting this gossamer quality of Swinton’s even further. She’s as fine an avatar for unknowability as we’ve ever known—a phantom in our mist, excuse me midst.

Which is why Joanna Hogg’s brilliant genre-bender The Eternal Daughter probably feels so perfect from its first frame. Here we are being handed a gift—the puzzle piece to a missing part of reality we hadn’t quite realized we’d been missing until it came along. Even better here is the key at the end of David Lynch’s Mulholland Drive—the one that opens that little blue box. And as with Lynch what look like answers are really just more questions, questions unto questions. The very best of Ghost Stories seek to unsettle this fabric of understanding—to fog up the lines between real and unreal, between life and afterlife. Joanna Hogg’s The Eternal Daughter immediately ranks among the very best of the Ghost Stories. One which interrogates reality, memory, personhood and self, by the simplest of its twists and turns. I am quite frankly astonished by it, and can’t believe it’s only just been made. This feels like a forever thing, one hidden behind a thin veil until Joanna Hogg made it visible. Blessings never cease.

The story at first glance is quite simple. One dark and stormy night (what else) Julie Hart (Tilda Swinton) brings her elderly mother Rosalind (also Swinton) to an isolated manor turned hotel in the English countryside, where they plan to stay for several days. The manor was once a long time ago owned by an aunt of Rosalind’s, and she spent a lot of time there in her childhood and teenage years during the chaos of the second World War. Julie is a filmmaker and she is considering making a film about her mother’s story—she wants to ease some of those memories out of Rosalind, and she figures being in this place might make that easier than straightforwardly interrogating the old woman, especially given their complicated relationship.

Not that their relationship is strained—they seem to be in a great place, quite loving toward one another. But women of Rosalind’s generation and character are of the tight-lipped sort, and Julie is uncomfortable with the idea of breaking through those walls. Unsure it’s even her right to dig around in the reminiscences of this woman she loves so very much. She’s having a crisis of authorship, which translates with great ease to some good old-fashioned writer’s block.

But this place does indeed start opening doors in Rosalind—memories, fine and sad alike, begin pouring out of her. And along with them noises—the proverbial bumps in the night—start keeping Julia awake every night. A banging upstairs in an empty room. Footsteps. Eerie animals howling in the woods. The flatly indifferent hotel receptionist (Carly-Sophia Davies) seems to be the only other person in the building at every given time of day or night, even as she maintains that the hotel is full of guests. Every meal that Julie and Rosalind take in the dining-room is a solitary affair. And yet, the sounds. Julie, unable to sleep, finds herself wandering the grounds at night—trying to get phone reception to call her husband at home, and also walking her mother’s adorable dog Louis (Swinton’s own dog, stealing a good chunk of the spotlight).

The simplicity of this story, one we’ve seen some form of a thousand times before, is of course complicated by a few factors right off the bat. There is the fact that Swinton is playing both characters, mother and daughter, for one. Swinton’s obviously talented enough to make both women seem like perfectly differentiated individuals—this is far from the first time she’s been called on to use her naturally uncanny effect to play multiple characters. Whether we’re talking the Orlando that stretches through time and across sexes in Orlando, the three color-coordinated clones in Teknolust, the twin sisters in both Hail Caesar! and in Okja, or the three characters she gave sinister life to in Luca Guadagnino’s Suspiria, this is right in Tilda’s wheelhouse. Still, this is some of her finest work—refracting these women in complex prisms of perception; Persona as a one-woman show.

But beyond that it’s important to note that Joanna Hogg’s previous two films The Souvenir and The Souvenir: Part II were autobiographical ruminations on Hogg’s own youth that starred Tilda Swinton’s daughter Honor Swinton Byrne as a filmmaker-to-be named Julie Hart with Tilda herself playing Julie’s mother Rosalind. While The Eternal Daughter isn’t exactly The Souvenir: Part III it’s not exactly not that either. Somehow it stands astride those two films, as if from another plane looking in. Tilda now playing a grown-up version of her own daughter and simultaneously the mother of that character, all while the film ruminates on the way in which we become our own parents and yet how they remain utterly unknowable to us… Hogg ties us up in a Gordian Knot of her own autobiography, with this film as an impossible map straight through the tangle. The threads of the present and the past are so intricately woven you can only wonder at the close-up, but once you step back you simply marvel at this exquisite thing. We’re all intangible, scattering like the darkness does from the light, the second we try to see sense in it.


← Benson & Moorhead Return to Indie Sci-Fi with 'Something in the Dirt' | Why Didn't This Week's 'Quantum Leap' End with a Preview of the Next Leap? →


Image sources (in order of posting): A24,
Most Viewed