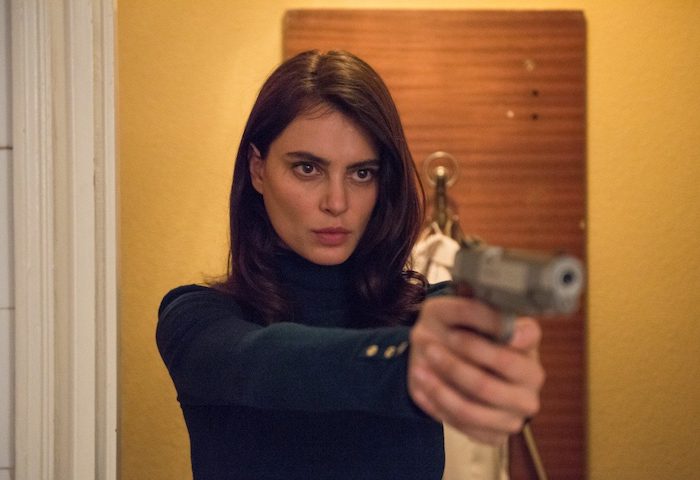 Maybe you’ve been on a dating app before and have encountered a profile claiming to be looking for “a good time, not a long time,” and though I loathe to be indebted to the f*ckboys of the world, there is no better phrase to describe The Whistlers (La Gomera). The latest film from Romanian writer-director Corneliu Porumboiu (12:08 East of Bucharest, The Treasure) is well-crafted and sufficiently entertaining to hold your attention for an hour and a half but will undoubtedly evaporate from your memory entirely within a few weeks.

In interviews, Porumboiu has noted that the concept for the film came from encountering an article about the whistled language El Silbo, developed by people on the Canary island of La Gomera, and imagining how it could be used in a criminal context. Admittedly a cool idea, but one might notice that it really sounds more like a cool plot device as opposed to a cool bona fide plot, and therein lies the film’s central shortcoming. The style is impeccable; Porumboiu’s status as a craftsman is not to be doubted, nor the chops of his team, which include artistic director Arantxa Etcheverria, DP Tudor Mircea, and editor Roxana Szel. The issue is that no amount of polish or innovative narrative devices—everything unfolds out of chronological order, structured as a series of tableaux—can truly make up for the fact that the basic plot and the characters involved are nothing to write home about, with all the originality of a photocopy of a photocopy.

Everything revolves around a mattress factory serving as a front to launder and distribute money for a European criminal network of largely unspecified goatee-stroking badness. The morally ambiguous protagonist of this noir-lite tale is a dirty cop named Cristi (Vlad Ivanov), and as the story usually goes, we shouldn’t judge him for the whole working with mobsters thing because the whole system is corrupt, including his stone-cold ice queen boss Magda (Rodica Lazar). The thing is, Cristi is feeling very middle-aged and tired as of late, and he kinda wants to get out of dodge—at least, until he gets dragged further down the rabbit hole by femme fatale Gilda, who wants him to help her double-cross the big bad boss Paco (Agusti Villaronga) and hit the road with several million euros’ worth of money-stuffed mattresses in a plot that requires Cristi mastering El Silbo.

There seems to be some conscious effort to try to flesh Gilda out into an actual person, and though Catrinel Marlon tries her damned hardest, at the end of the day she’s stuck with a plotline that revolves around various men ogling and pawing at her, all filmed by a camera that also does its fair share of leering. While the surface slant is that the creepy men are bad, etc., etc., the fact that everything is shot in a way that seems to consider “sensual” synonymous with “predatory” makes the lip service feel decidedly disingenuous. And let’s not even get into total superfluous sex scene that seems made with the single-minded intent of perving on Gilda on several levels. Don’t get me wrong, technically even these scenes are well-constructed, it’s the content and the very tired implications of said content with which I take issue.

That said, despite being a shameless and unrepentant paragon of the male gaze and its self-indulgent conception of a femme fatale with “depth,” perhaps the most tired and narratively overutilized stock character in the entire trope book, it’s a sufficiently entertaining, supremely stylish film. There are some great scenes and truly clever moments—a reimagining of Psycho’s (in)famous shower scene is one particular stand-out— just a total dearth of bigger ideas.

On one hand, The Whistlers is a technically masterful film with solid performances, some truly great sequences, and opens with Iggy Pop’s “Passengers”—arguably somewhat manipulative but still effectively charming. On the other, it’s far too clever a film to cop out and claim ignorance or lack of conscious intention when it plays to tired and outdated sensibilities, even the most masterful techniques can’t totally compensate for the trite storyline hiding behind all the bells and whistles (pun very much intended).

← Review: 'Creepshow' Is Worth That Shudder Subscription | Review: 'The Death of Dick Long' Offers A Fitting Follow-Up To 'Swiss Army Man' →