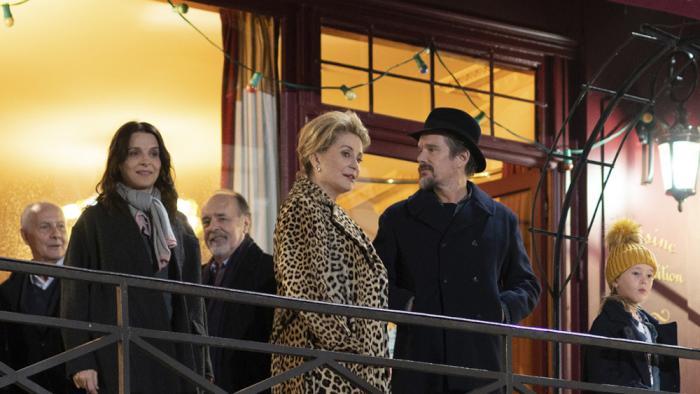 Last year, celebrated Japanese director Hirokazu Kore-eda won the Palme d’Or at the Cannes Film Festival with Shoplifters, a startlingly good family drama that felt like a new career peak for a film-maker who has been producing consistently strong work at a prolific rate for many years. Many predicted that the Palme victory would signal a turning point in Kore-eda’s career, a point that seemed assured when it was announced that he planned to make his next film, The Truth, in French and English rather than his native Japanese. Having said that, the film itself is very much cut from the same cloth as the rest of Kore-era’s filmography. Anyone familiar with his work will recognize all his favorite themes here, particularly that of families and their strained relations.

Catherine Deneuve plays Fabienne, a beloved French actress with decades of work under her belt who is totally not Catherine Deneuve (even though, at one moment, she is cheekily referred to as the ‘Belle of Paris’). She has recently published her memoirs, which has encouraged her semi-estranged daughter Lumir (played by Juliette Binoche) to return home from New York for a confrontation of sorts. Tagging along are her daughter and actor husband (Ethan Hawke), a TV actor who everyone, himself included, seems happy to admit he’s pretty mediocre in terms of his talent. While Fabienne works on a new film with a hot young actress who bears an uncanny resemblance to a late frenemy, Lumir tries to confront her about the fudged up facts in her autobiography and her questionable definition of the truth.

As is befitting a grand dame of the French cinema, Fabienne is curt, elitist, and utterly devoid of tact. It never seems to cross her mind that perhaps it’s not to her or anyone else’s benefit for her to casually blurt out whatever she’s feeling at any given moment in time. While she is happy to embellish her memoirs to keep up a well-maintained decades-old public image, she has no qualms about telling her daughter her often-callous opinions. Even this is a role of sorts, one she doesn’t seem to know or remains unwilling to stop playing. At one point, with no shortage of pride, she declares, ‘I’d prefer to be a bad mother, a bad friend, but a great actress.’

Lumir, meanwhile, has grown up with the seemingly unshakable assertion that her mother was a witch in all but name and her childhood was bereft of the warmth of maternal love. Instead, she craves the memories of Fabienne’s former friend and professional rival, who seemed to be more motherly to her in her youth than the woman who gave birth to her. As the film moves forward, it remains debatable how much of her own truth is rooted in reality, as Kore-eda takes on one of his favorite recurring themes in dissecting the malleability of human memory. If you’ve spent decades committed to these unshakable truths, does it matter if they’re not entirely real?

You come to Kore-eda for a certain kind of sturdiness. His direction of human drama walks a fine line of emotional catharsis that easily skips past saccharine sentimentality in search of something more gritty. You can rely on him to dig deep into his characters without making it seem inauthentic. Lumir and Fabienne’s pent-up problems unfold through smaller moments and natural asides rather than the traditionally romantic screaming matches of cloying dramas past. You’ll think you know exactly where this story is heading and to what emotional climax it will peak but will be delightfully surprised when it doesn’t go there.

Juliette Binoche and Ethan Hawke are hardly slouches at this acting lark, but as expected, this is the Catherine Deneuve show all the way. How could it not be? She radiates that aura of glamorous intimidation that makes her pitch-perfect for such a figure, both on and off the screen. She doesn’t have to raise her voice to have everyone around her fearful and eager to please. Deneuve and Binoche bounce off one-another well, even though one performer is clearly dominant in the eyes of the screenplay. Their dynamic is at its most intriguing when we see Lumir try to use her mother’s acting as a means to emotionally decipher her. The film she is currently working on - a pretty hokey sci-fi drama about a mother-daughter relationship - gives her glimmers of insight into her process and how she hoards the emotions of real-life to benefit her work more than her personal connections. Lumir is also happy to participate in this process, writing her mother a script to apologize to a long-time employee because she knows it will be more effective than Fabienne’s own bluntness. A cheaper film would have used this and its ultimate conclusion to simpler ends, but Kore-eda has no intention of sacrificing the true ongoing difficulties of this relationship.

For Kore-eda devotees, The Truth is probably not going to set the world on fire, and for those unfamiliar with his work, they may wonder what all the fuss is about. If you want a good starter film, check out the near-perfect Shoplifters. As it is, The Truth has much to offer, even in its over-familiarity, and it’s another reminder as to why Kore-eda is as beloved as he is. They don’t make them like this anymore. Well, unless you’re Hirokazu Kore-eda.

The Truth is now available on VOD.

← The Last Ten Minutes Of 'Warrior' Is The Best Film Ever Made | 5 Shows After Dark: 'Outcry' Premiere on Showtime, 'Perry Mason' on HBO →