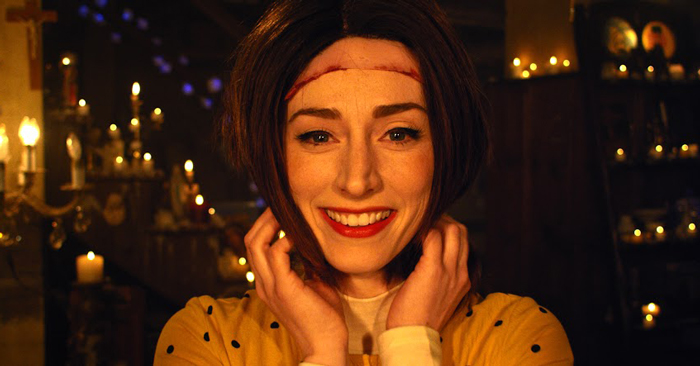 Review: 'The Stylist' Brings Shocks, Gore, And Surprising Heart To Its Slasher

Ever look at a woman, stylish and sublime, and think to yourself, “I’d kill to look like her.” The indie horror stunner The Stylist takes this impulse literally, unwinding a tantalizing tale of envy and terror.

Based on her short film of the same name, co-writer/director Jill Gevargizian’s slasher-thriller is a savage exploration of loneliness and obsession. Najarra Townsend stars as Claire, a hairstylist who offers clients her skillful hands and sympathetic ear. As she clips and combs, they casually share the secrets of their lives, from tales of boyfriends and career accomplishments to darkest doubts and whispered fears. Claire is fascinated by all of it, sometimes to a deadly degree. Deeply unhappy with who she is, she occasionally kills her clients to steal their scalps so she can live the fantasy of being anyone but her.

In this grisly routine, Gevargizian binds her audience to this insecure slasher, following Claire as she meets her latest idol, a beautiful bride-to-be named Olivia (Brea Grant). We’re invited to sit and soak in the intensity of Claire’s emotions, which are reflected by a violent color palette, bleeding in hues of red. (That really accentuates the blush in her cheeks!) This vibrancy is matched by a theatrical tone. When Claire is sad, her face is a graceful portrait of pain. When she is joyful, her expression paints happiness as so foreign that it’s frightening. Her social awkwardness might be a red flag to her next target, but also urges Olivia and us toward sympathy.

Gevargizian laces complexity into her killer by revealing inner conflict. Claire does not enjoy the kill and feels haunted by the past. Yet she cannot stop the craving that pushes her toward her fatally bad habit. So even as she’s scalping innocent women for the crime of being aspirational, your heart may break for her just a bit. The core of her pain is that she feels invisible, the supporting character in the lives of so many women, who seem perfect, passionate, and powerful. Claire wants a piece of that so desperately that she’s driven to destruction. And for once—in this film—she is the leading lady, deranged though she may be.

With loads of swooning style, Gevargizian guides this gruesome story of self-discovery gone awry into an absolutely bonkers climax that’ll leave audiences drop-jawed. While Grant brings a grounded pathos to the film, Townsend pushes it to the extremes where an anti-heroine can dance on the brink of madness and dreams. All in all, The Stylist boasts gag-inducing elements of gore, a high-strung tone that reflects her prone-to-panic protagonist, and keen empathy for victims and killer alike. The result is a trippy thriller perfect for Midnight Movie watching.

This film was previously capsule reviewed out of Fantastic Fest 2020.

The Stylist begins streaming in the US, UK, and Canada on March 1.

← Twitter Users Make Fun of Cliched Film and TV Tropes | Did 'Superman & Lois' Introduce A Hero As Their Villain? →